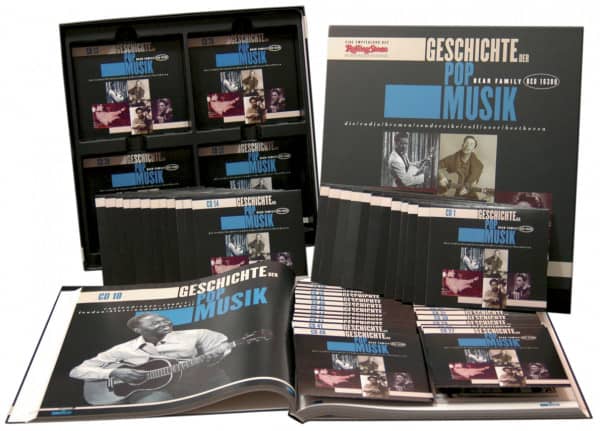 THE KLAUS KUHNKE ARCHIVE FOR POPULAR MUSIC RADIO BREMEN
present
HISTORY OF POP MUSIC
on 52 CDs in german language
with a documentation on 300 book pages in LP size.
with the text to the broadcasts, many pictures, references and name and subject indexes
The most extensive exploration of the history of pop music to date took place in the eighties - on the radio. Between 1984 and 1986, the trio of journalists Klaus Kuhnke, Manfred Miller and Peter Schulze presented 52 programmes on Radio Bremen under the title'Roll Over Beethoven - zur Geschichte der Populären Musik'. They started in 1945 and worked their way through to the end of the hip sixties. Kuhnke, Miller, Schulze had already presented the developments up to 1945 in 40 broadcasts in the 1970s and had gained a legendary reputation for critical and entertaining reporting. In the second part of their series, they observed the unstoppable internationalization of pop music and its increasing social significance.
Payola and Dee Jays, the electrification of the blues, the development of rock'n' roll, hits, skiffle, country, folk music and folk, soul, R&B and flower power found their place, documented by countless musical documents and comments from stars, record bosses, deejays and other zeitgeists.
John Lee Hooker gets blown away, Chuck Berry comes into tender contact with Oscar Hammerstein, the German hit gets scientific (!) Respect is missed, Sinatra is celebrated and at the same time sorted into the economic background that the crooner needed and promoted, simply everything remarkable does not only happen - no, everything that was'in' the 25 years depicted is judged disdainfully. And this on a level that is hardly in demand any more, namely intellectually adept and then also quite radical and relaxed at the same time.
The unique result of the work of the trio of journalists is now available here on 52 CDs, accompanied by a book of several hundred pages, which contains the manuscripts of the programmes in an easily edited form and has become the most comprehensive dictionary of pop through a manageable register.