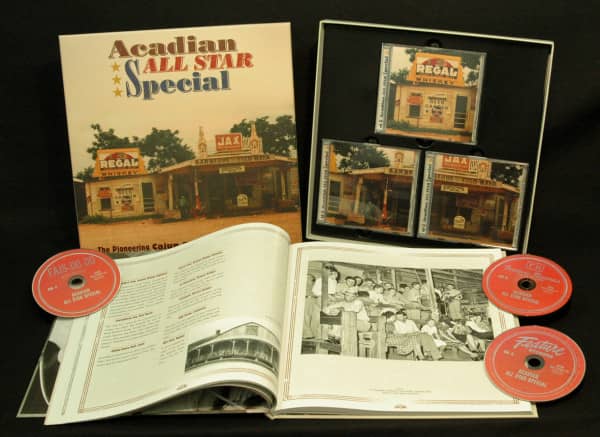 A roots music classic from Bear Family! The dawn of modern Cajun music! Records so rare that just a few copies exist of most of them! Very few of these recordings ever reissued on 45, LP, or CD until now! Songs include the original version of Diggy Liggy Lo plus Big Texas...the song that Hank Williams adapted into Jambalaya.

This was a set years in the making. It took ages to figure out exactly how many classic Cajun recordings had been made by legendary record producer J.D. Miller in the 1940s and '50s, and then it took even longer to find them and painstakingly restore the sound. Finally, Cajun music expert Lyle Ferbrache tried to track down as many of the survivors and relatives as possible for the extensive book. But it was well worth the wait! The result is a classic roots music collection done as only Bear Family can do it!

From 1946 to 1959, J.D. Miller released all forms of French language records, from the beautiful fiddle and guitar records of Oran 'Doc' Guidry and Leroy 'Happy Fats' Leblanc to the raucous recordings of Robert Bertrand and the Lake Charles Playboys. Many very rare recordings are reissued here for the first time, and those include the first recordings of Jimmy Newman. Also included are such rarities as
War Widow Waltz by Laura Broussard, Terry Clement's original version of Diggy Liggy Lo, and Papa Cairo's Big Texas, the song that Hank Williams adapted into the one Cajun song everyone knows, Jambalaya. This is a marvelous part of American music that came close to being lost for all time!

what a nice finishing - thanks