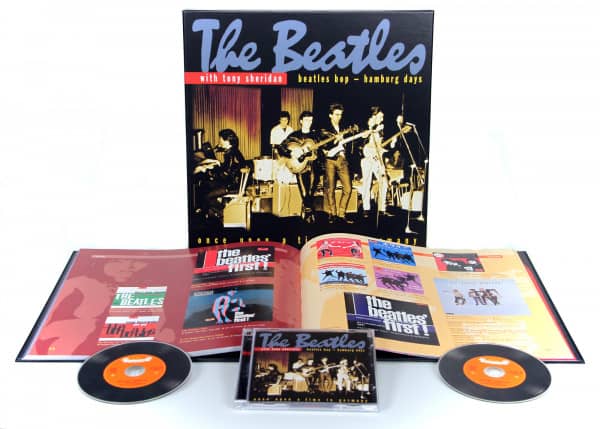 
Now this is something special! A true sensation in the history of Beatles reissues! It comes exactly 40 years after the Liverpool foursome -still without Ringo Starr and billed as The Beat Brothers-. issued their first recordings with Tony Sheridan.
Tony Sheridan, a singer-guitarist from Norwich, England, was first among equals (Paul McCartney, John Lennon, George Harrison and drummer Pete Best). He and the group had withstood the rigors of playing up to eight hours per night in Hamburg joints. As John later said, "I grew up in Hamburg, not Liverpool."
Legendary producer Bert Kaempfert recorded the now-famous songs, and they were released on Polydor. They were the earliest commercial recordings by the Beatles, and for four decades the original vinyl releases have been very highly sought-after. Since the dawn of the CD era, the Polydor recordings have been available, but mostly as uninspired 8-song discs with a single piece of coloured paper pretending to be a booklet. No one ever seemed to care about the different versions, and wealth of mixes and variations that existed in several archives around the world.
Following up on an idea by the Hamburg journalist and author Bernd Matheja ('1000 Nadelstiche') and in cooperation with Swedish Beatles specialist Hans Olof Gottfridsson ('The Beatles - From Cavern To Star-Club') Bear Family now proudly presents all available recordings of Tony Sheridan & The Beatles / Beat Brothers. An incredible 38 (!!!) versions from the so-called 'Polydor Years', all lovingly restored from tapes that -in some cases- were considered non-existent or lost. Finally, collectors get stereo and mono, partly overdubbed versions, takes with different lyrics and much more!
But that's not all! There's an incredible book accompanying this milestone release. Very rare documents, single picture sleeves, and rare photos tell the story of these songs, and the four young men from Liverpool, then at the dawn of their careers. Here is one of the building blocks of modern music.
Truly the most exciting event in Beatles archeaology in a long, long time!
'Tony Sheridan with the Beatles:' Beatles Bop - Hamburg Days' is available as a 2-CD-LP-sized-boxed set with Bear Family's incredible book (BCD 16447 BK) or as a regular double CD (BCD 16583 BH).

As usual, Bear Family is unsurpassed in the completeness and sheer beauty of it's box sets! This one comes with a gorgeous cover, a stunning hardcover book (unavailable elsewhere) and a 2-CD set of all the recordings our Fabs made with Tony Sheridan in Hamburg. Recommended!

This is a beautiful collection - the ultimate Tony Sheridan/Beatles' package. All versions of the tracks recorded; great sound quality in mono and stereo. The book is lovely - lots of interesting photos and text. Highly recommended. Oh, and Bear Family Recvords is a great company - good prices; superfast delivery; perfect packaging. Thank you!