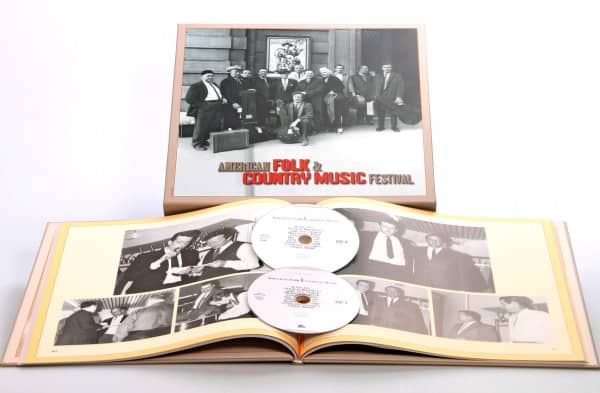 2-CD box (LP-size) with 76-page hardcover book, 41 tracks. Playing time 107:41 mns.
TIME IN A BOTTLE!
It was 1966, and the success of the American Folk & Blues festivals in Europe led to the Festival of American Country Music. But this wasn't slick Nashville music, it was old time, Cajun, bluegrass, and folk music with deep roots in the mountains and swamps of America's rural South. The artists included THE STANLEY BROTHERS (just a few months before Carter Stanley's death), ROSCOE HOLCOMB,
THE NEW LOST CITY RAMBLERS, CYP LANDRENEAU'S CAJUN BAND, and COUSIN EMMY.  Together, they offer a fascinating glimpse of early American music played with heart and soul. All the artists were still in peak form and gave European audiences their first taste of this side of American traditional music. It was a historic tour, and decades ahead of its time.  In 2000-2002, the performers whose music was heard in 'O Brother Where Art Thou' staged a tour called 'Down From The Mountain.' The idea was the same as the Festival of American Country Music in 1966, except that the music heard in the Festival of American Country Music was truly down from the mountain (just one artist was on both tours: Ralph Stanley).
This collection is highlighted by detailed in-person reminiscences by Mike Seeger, Tracy Schwarz, and John Cohen of the New Lost City Ramblers, all of whom could appreciate the music both as fans and fellow performers. It also includes original photos from John Cohen, Klaus-Rüdiger Müller, Lillies Ohlsson, Reinhard Pietsch, and Reinald Schumann.