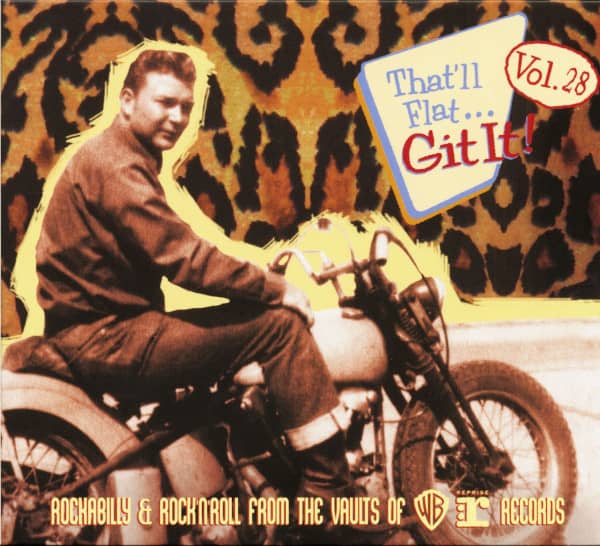 • Unbelievable retrospective keeping a spotlight on the rockin' recordings of one of America's biggest major labels best known for its pop music output: Warner Brothers and its subsidiary Reprise! ,
• Rock'n'Roll and Rockabilly classics by Johnny Carroll, Troyce Key, Bob Luman, Bill Haley, Sammy Masters, The Everly Brothers and many others! ,
• Includes a Charlie Gracie movie cut from the film 'Jamboree', only issued at the time on a Warner Brothers promotional disc for dee-jays! ¥ Many tracks on CD for the first time!  ,
• Liner notes by Bill Dahl, information to the recording sessions – with recently discovered facts – plus rare photos and illustrations!

Warner Brothers Records was founded in March 1958 as part of the world famous movie production company. Based in the heart of the movie mecca Hollywood, the company first set focus on issuing their soundtracks on albums but besides that they tried to play a role in the Rock'n'Roll market. Besides countless pop albums some fine little Rock'n'Roll tunes were produced and sometimes bought from small California labels.

This compilation gives you the Rock'n'Roll chapter of one of the biggest Pop music major labels in American history. A brimfull CD with carefully chosen tracks, all recording information, including recently discovered and very interesting facts. For example, who is behind the mask of the pseudonym Tyrone A'Saurus &, His Cro-Magnons, and not to forget the great liner notes by Bill Dahl plus photos and illustrations. How about some guitar instrumentals by John Buck &, His Blazers, Don Ralke or Johnny Zorro? Or oddballs like Johnny Sardo, the brother of the famous singer Frankie Sardo.

What about Bill Haley and his version of the Carl Perkins penned classic Blue Suede Shoes, or two rare Halloween-Monster-Rock'n'Roll tracks by Spike Jones and Tyrone A'Saurus – it's worth to give it a listen! After Warner Bros. had purchased Reprise from Frank Sinatra, the new subsidairy released a 45rpm single by one of the great unknowns: Shelly Dane – included here. Fantastic Rock'n'Roll stories from the label history of Warner Brothers and their unbelievable music, carefully restored, illustrated and compiled in the best known Bear Family quality.

And now: That'll Flat Git It!