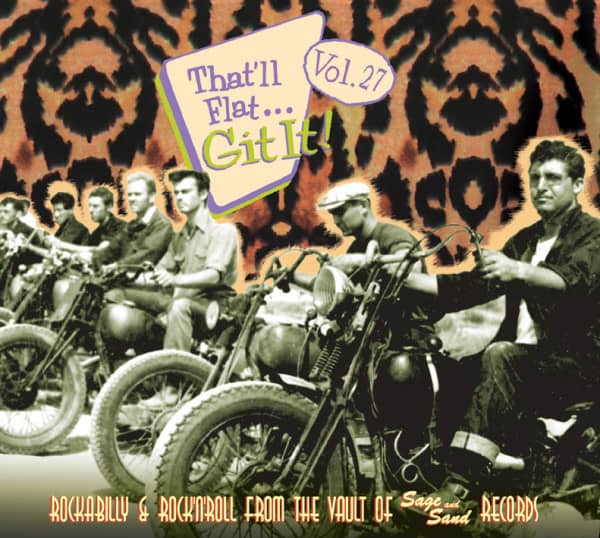 Long overdue retrospective of a forgotten West Coast label! Includes rockabilly classics by Whitey Pullen, Lonnie Barron, Jimmy Patton, Rusty York, and many more, plus the FIRST EVER recording by guitar wizard Lonnie Mack! Many songs on CD for the first time! Biographies by Colin Escott and many previously unseen photos!

Sage & Sand Records operated from an upstairs office on Hollywood Boulevard near Capitol Records, but only scored one hit in the fifteen years it was in existence. Sage & Sand recorded an eclectic mix of hillbilly, western, and rockabilly, and the best of the rockabilly recordings are here (the best of the up-tempo country recordings are on our companion volume, 'Gonna Shake This Shack Tonight': Sage & Sand, BCD 16892). This is the sort of collection that sets collectors' hearts racing: Songs they've never heard of together with records they could never afford in one generously full package ... plus the stories and photos! What about Lonnie Barron, who called himself the 'Elvis of Muttonville,'and who was shot by a jealous husband just as his newest Sage & Sand record was becoming a hit. And what about
Chuck Howard...a hard luck rockabilly singer who eventually worked with two of the Beatles Or what about Harley Gabbard & Aubrey Holt who decided to bring their teenage cousin, Lonnie Mack, to their session, never knowing that Mack would revolutionize the electric guitar - They're all here alongside oddballs like wild men like Gene Vincent's former road manager, Whitey Pullen, or Donnie Bowser who sang blazing rockabilly from his wheelchair. Incredible stories, incredible music, incredibly restored and packaged... just like you'd expect from Bear Family.