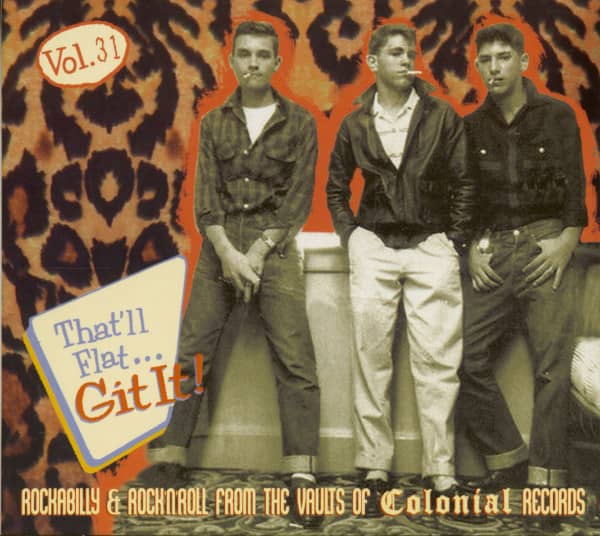 CD - Deluxe DigiPac (4-sided) with 44-page booklet, 34 tracks, playing time approx. 77:29 minutes.
• First time ever compilation of masters from the influential Colonial Records label from Chapel Hill, North Carolina.
• A long unjustly underestimated record company that deserves more attention.
•       Including the first recordings by George Hamilton IV, John D. Loudermilk and Billy ‘Crash’ Craddock as well as many more             artists from the Carolinas.
• This CD compilation contains more than ten previously unreleased tracks!
•       Booklet with never before seen photos and information on the Colonial label.
• Carefully restored and re-mastered recordings.
• DeLuxe packaging with extensive liner notes and in-detail discographical information.
Colonial Records was established in 1951 by Orville Campbell in the city of Chapel Hill, adjacent to the University of North Carolina. From this collegiate environment and beyond Campbell pulled talent to record and release an eclectic mix of pop, bluegrass, comedy and good old rock ’n’ roll for his small but prolific record label. The Colonial la-el existed until 1965 scoring several minor hits, spawning the musical careers of several  soon-to-be famous musical artists and providing entertainment for a teen aged audience in the Carolinas and beyond.
As it corresponds to the concept of Bear Family’s ‘That’ll Flat Git It!’ series, only the rockin’est sides from the Colonial catalog were chosen for this release. And these sides can compete with the best in the genre!
Featured herein is the original version of 'Sittin’ In The Balcony' by its author and originator, John D. Loudermilk (here as Johnny Dee.) Please, listen to the original version of the song alongside the later hit version of Eddie Cochran. Could you really tell us which version is the original and which version is the copy? Then there is Wake Up (Little Boy Blue) by the mysterious Franklin Brothers, a recording that is so rare that until recently it was considered non-existent and never appeared in any discography..
These are the stories record collectors dream of! Many more previously uncomped artists are on board here for the first time, such as E.C. Beatty, The Bluenotes, Henry Wil-on, The Goldtones and many more. Sixty years after the original recording dates, Bear Family makes it possible for these artists to receive the attention they have always been entitled to.
As most of the original master tapes are lost forever, the majority of masters have been taken from the original rare and hard to find Colonial single (45s) releases and have been carefully restored and re-mastered to meet the quality standards of Bear Family..
This is a truly worthy and long awaited project which will find favor among fans of rockabilly music, 1950s music aficionados, and folks into North Carolina culture and his-tory, and just plain music fans in general.
This is one Bear Family release that you don’t want to miss!

Wild work from one of the most obscure labels featured in this series so far – the tiny Colonial Records imprint from Chapel Hill, NC – the company who first pressed comedy records by a young Andy Griffith, but also did some great rockabilly as well! The Colonial style is nicely different from better-known companies in Memphis and Louisiana – and the tunes often seem to have an equal balance country bop and early rock – maybe a few steps behind some of the other scenes at the time, but in a way that really gives their singles a heck of a lot of charm! The songs are incredibly well-produced almost feeling like offbeat songs from the Columbia studios at times, but maybe with a bit more bite – and given that Colonial cuts have hardly been reissued over the years, there's a huge amount here to discover. CD features 34 tracks in all, with very detailed notes – and titles include "Somebody Sweet" and "Sittin In The Balcony" by Johnny Dee, "Wake Up" and "So Real" by The Franklin Brothers, "If You Don't Know" and "I've Got A Secret" by George Hamilton IV, "Runaway Lover" by Grady Lewis, "Birddoggin" by Bill Craddock & The Blue Notes, "Mountain Dew Rock" by Hoke Simpson, "Little Blue Eyes" and "Ugh Ugh Ugh" by EC Beatty, "The Battle" by Joe Tanner, "The Oriental Shake" by The Goldtones, and "That's All I've Got" by Ebe Sneezer & The Epidemics.

Interesting cd with the highlights of the Colonial record label

Absolutely perfect sound from old vinyl recordings, like the Bear Family releases always have got.
Interesting selection of some ot the obsurer releases by Colonial, combined with the well known hits of the label. Some rockabilly, many novelty and humorous songs. Booklet with extensive information and photos.

Top rock'n'roll music as usual for the That'll flat serie

Excellent collection of rockabilly from North Carolina. The booklet is very detailed and helps capture the spirit of the time.