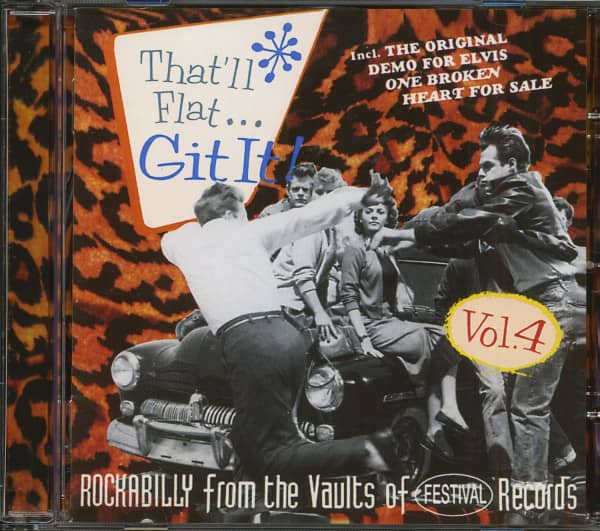 Rockabilly from the vaults of Festival Records, owned by Herb Abramson, the co-founder of Atlantic! Rare late 50s and 1960s recordings.
Back in 1992, we decided that Rockabilly sounded good on CD, so we had the idea that we should create the all-time definitive Rockabilly series, That’ll Flat Git It!
Above all, Rockabilly was music recorded for 45RPM singles, so we designed a Rockabilly series label-by-label instead of artist-by-artist, and we compiled it for listening pleasure. Just the great stuff, plus a few super rarities.

Every CD would be for the most part a 30 song jukebox of the finest Rockabilly ever recorded for all the great labels. We sourced the very best sounding tapes and took them to the best mastering engineers, and then we took the packaging to a new level. We adopted the catchphrase of the first Rockabilly dee-jay, Dewey Phillips, "That’ll Flat Git It!", and we hired Bill Millar, who'd compiled the still-classic label-oriented Rockabilly LPs in the 1970s and 1980s, to write the notes. We looked for previously unpublished photos, and tried to find all the artists who'd never been found before. The result is a truly definitive Rockabilly series that now runs to twenty-seven volumes.

You might have thought that rock 'n' roll archaeology had reached the point where something was known about everyone who once cut a record for every diddly record label that ever existed.

You might have thought that - but you'd have been wrong.

Here is rock 'n' roll from the biggest of the big cities, featuring guys who have, for the greater part, been sucked into the vortex that fate saves for the once promising. It's also rock 'n' roll with a very New York feel.

All of these sides were cut by Festival Records, a joint venture between Herb Abramson and Jerry Blaine. A little background. Abramson was one of the founding partners in National, Jubilee, and the Atlantic Records. After he returned from the service in 1955, ex-Billboard columnist Jerry Wexler was in his chair at Atlantic, and in June 1956 Herb was handed the label's Acto division. Two of his first signings were white rockabillies, Hal Willis and Glenn Reeves, from southern parts. After a couple of years, Herb left Atlantic in a series of boardroom maneuvers that still aren't entirely clear. The players in the story, Abramson, his ex-wife Miriam, Wexler, and the Erteguns all have slightly different accounts, but the upshot was that Herb was gone.

Herb used his settlement from Atlantic to start several labels including Thriumph, Blaze and Festival. He signed a few promising talents, like Gene Pitney and Don Covay, and cut a few great records, but couldn't get a hit. Festival was started in late 1966 or early 1967. Abramson's partner in this venture was Jerry Blaine, who had started Jubilee Records with him in 1947 shortly before Herb left to start Atlantic. Jubilee didn't amount to much when Abramson left, it had started with Yiddish novelty record, and made no waves until Blaine moved into R&B, signing the Orioles in 1948. Twenty years on, Abramson and Blaine were back together with high hopes for their new label.

The first signee to Festival was 'Willie The Wild One', who according to a press release at the time, was English. In fact, his name was Billy Barry, an the closest he'd been to England was New England. As Abramson remembers, he was from Framingham, Massachussetts. Willie had apparently copped his attitude from Marlon Brando in 'The Wild One', although at his signing he looked more like he belonged in a pimply English beat group than on an Harley.

Barry certainly had the goods for the '60s beat scene. There's enough snarl on They Call Me Willie The Wild One for him to sound convincing, and his guitarist hit the right licks. On other sides, his limitations seem to be magnified.

And what of Billy Balls? According to Abramson, his real name was Wlliam Heintzman, and he was one of the prime movers in the east Village punk scene. He played with Guitarist Cheetah Chrome of the Dead Boys, and drummer Jerry Nolan who later joined the New York Dolls. Billy was also an accomplished pianist and a piano tuner much in demand among the classical fraternity, but here he seems to be staking out his punk credentials. If there was any indication when Motorcycle was recorded, it could be pronounced a true forbear of punk. According to Billy Miller, proprietor of 'Kicks' ( do you have a sub? If not, why not?) Billy Balls also worked as Billy Piano, ran around with a seriously sleazy crowd, and was shot to death by the police.

Charlie Starr was from upstate New York, probably Buffalo. He cut two albums for Prophesy records, a label distributed by Atlantic. These recordings were made a decade or so before the Prophesy recordings, and were cut by Abramson five or six years before Festival was launched. According to Tim Lane, assigned the task of writing about Starr on the 'Tough And Tender' album, "Charlie is a man who believes in truth and people. Although he has been unable to see the world around him since was eleven years old, he transmits through his music as well as his personality, sensitivity, insight, and a feeling for life that is enviable".

In 1961, Charlie Starr was taking his best shot with rockabilly and nicely underproduced teen ballads. Black Jack Joey was pure greaseball rockabilly, Sick And Tired is driven by some terrific kick-ass drumming. Despite some timing mistakes, and a few other musical goofs, Charlie showed early promise. Where he is now is anyone's guess.

We know where Ronnie Dio is. He is the only artist here to have made waves as a performer, although most rockabilly fans will probably be unfamiliar with his later work. He was born Ronald Padavona, some sources say on July 10, 1949, in Cortland, New York - others says circa 1940 in New Hampshire. If he was indeed born in 1949, he would have been all of twelve years old when he cut this version of Jessie Hill's New Orleans classic Ooh-Poo-Pah-Doo on which you can almost hear the acne spots forming. Dio was nothing if not prolific in his early years. He cut seven singles between 1961 and 1967, and Abramson succeeded in licensing the two cuts here to his old partners at Atlantic in 1962.

Review 2
Read, write and discuss reviews... more
Close menu
Customer evaluation for "Vol.4 - Rockabilly From The Vaults Of Festival Records (CD)"
From: Vladimir On: 1 Jun 2021
From: rock_the_universe On: 15 May 2017

When I first have heard this compilation, I was a little disappointed, because I've exspected 'classic' 1950s Rockabilly stuff and no 60s Rockers at all, BUT after listening to this great CD a few moons later, this really blasted me out of my shoes! Tremendous 60s Rock 'n' Roll and 'Garage Rockers' stuff at it's best produced by the likes of Herb Abramson, Otis Blackwell (how the fuck did they came to these ideas?) and others! Nothing for narrow-minded Hepcats but a must-have for every serious rockin' cat and to all the open-minded musiclovers in outerspace!