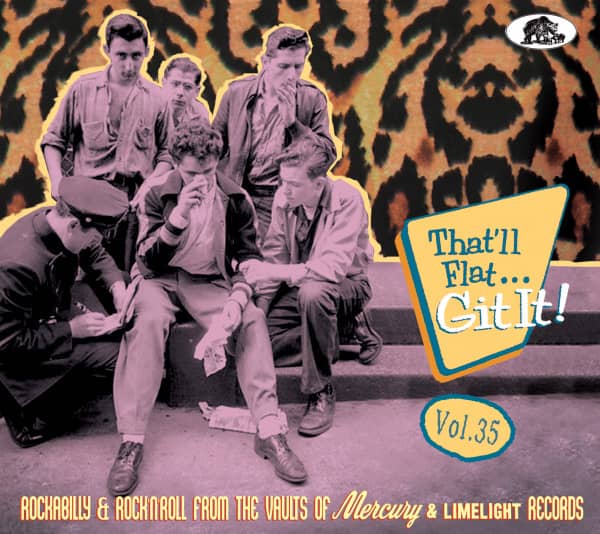 1-CD (trifold Digipak) with 28 page booklet, 35 tracks. Total playing time approx. 79 minutes.
Founded in 1945, Chicago's Mercury Records rapidly accrued major label status and grew into a full-service label, its massive roster encompassing everything from blues and R&B to country and jazz and a wealth of pop (the logo was a leader in covering R&B hits for the pop market).  Mercury also signed a small army of quality rockabilly and rock and roll artists during the mid-to-late 1950s, and they're the focus of this bountiful collection.
Blistering classics by a pre-fame Conway Twitty, Memphis mainstay Eddie Bond, and the still-active Narvel Felts are on board, along with rare gems by Curtis Gordon (his torrid Draggin' appears without the usual startling reverb effects), Orville Couch, Royce Porter, James O'Gwynn, Charlie Walker, leather-lunged George Young, and swamp pop greats Rod Bernard, Jerry Raines, and Roy Perkins (Mercury had excellent contacts in southern Louisiana).
Eddy Bell & The Bel-Aires' rollicking The Masked Man (Hi Yo Silver) hailed from the label's Windy City backyard, but the label spared no expense in bringing in sizzling rockers from all over the country—as this compilation excitingly attests!

Review 3
Read, write and discuss reviews...more
Close menu
Customer evaluation for "Vol.35 - Rockabilly & Rock 'n' Roll From The Vaults Of Mercury And Limelight Records (CD)"
From: Ralph On:22 May 2022
From: Vladimir On:28 Jun 2021

I was always thinking about when Bear Family would put out a second volume on Mercury AND HERE WE GO! Holy shit! I wasn't aware that the output on Rockers was THAT BIG and it includes the US-version without echo of Curtis Gordon's 'Draggin'! The sound is CRACKIN'! THANK YOU Bear Family for the world's greatest Rockabilly series - THE ROCKABILLY SERIES 'That'll Flat Git It'! With your releases you make the world a little brighter in these COVID-19 times! Many thanks from an enthusiastic Rock & Roll Daddy-O!