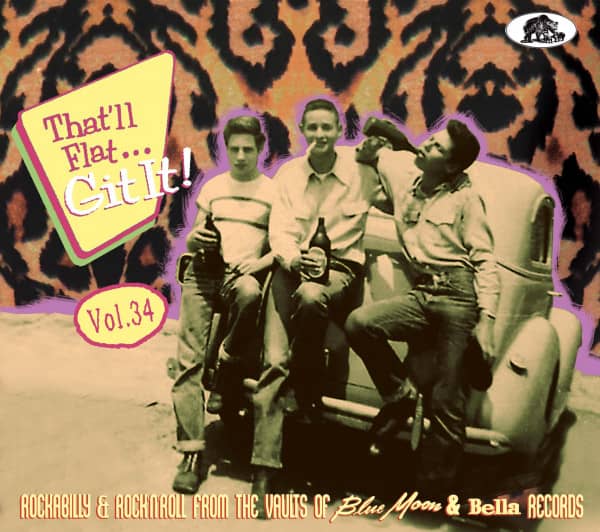 1-CD (Digipak) with 36-page booklet, 33 tracks. Total playing time approx. 78 minutes.
• The first CD compilation ever with recordings from the vaults of the record companies Blue Moon and Bella Records from Santa Clara and San José in California respectively.
• The album includes the complete recordings of Johnny Amelio and Joe Gradie and presents many more rockers.
• More than ten tracks are released here for the first time on CD, and two numbers were completely unknown until now: rare demos by The downbeats with Johnny Amelio, which we dubbed from a rare acetate.
• The booklet provides never before seen photos and detailed information about the history of the labels Blue Moon and Bella.
• Carefully restored and remastered recordings.
• DeLuxe packaging with extensive liner notes and detailed discographical information.
The two record labels Blue Moon and Bella Records from California were both owned by John Pusateri, who originally came from Franklin, Louisiana, and moved to San José in the 1920s. There he first founded Bella Records and in 1957 Blue Moon Records in Santa Clara.
In keeping with the concept of the Bear Family's 'That'll Flat Git It!' series, only the most rocking titles from the Blue Moon & Bella catalogues were selected for this release. And these recordings can compete with the best of the genre!
Here we tell one of those stories that record collectors dream about! In addition to the more well-known musicians such as Johnny Amelio, the Savoys and Gradie O'Neal, you'll find a large number of lesser-known colleagues such as Buddy Bennett, Chuck Royal, Joe Jaros and the Empala Six - to name but a few.
Since most of the original master tapes are lost forever, the majority of the masters have been transferred from rare and hard to find original single releases (45's), carefully restored and remastered to meet Bear Family's quality standards.
This is a promising and long-awaited project that we hope will be welcomed with open ears by fans of Rockabilly, by those who basically love the music of the fifties and by all those who are passionate about the music scenes and culture of California. We believe: you should not miss this album either!

The big advantage of Bear Family's not only because of the number of volumes but especially because of the treasury of fantastic music that those volumes contain Impressive That'll Flat Git It series is that both the big known labels and the small, completely forgotten brothers are featured. The latter category includes Blue Moon and Bella, two labels from California by a Mr. John Pusateri, a man who in the CD booklet even poses next to Hank Williams, but the why and how of that encounter is unfortunately not explained. Nor had we ever heard of Blue Moon and Bella and none of the 33 tracks on this CD rang a bell, but if you think this is going to be a soft cookie : think again, because this CD is packed with stuff as strong as a carajillo coffee. The CD opens with the hammering Jugue by Johnny Amelio & the Downbeats that sound like a screaming black combo with heavy sax in the kind of song that was eagerly covered by Barrence Whitfield & the Savages whose output was later plundered again by The Playboys, and that high level is maintained throughout the CD. That Jugue turns out not to have been a single blank piece of that Johnny Amelio by the way, because between his other three songs, together his complete output including never before released acetates and an alternative more guitar-oriented and even faster Jugue, there's also Jo Ann, another headbutt of a rock 'n' roll thump. Amelio is still alive, according to the booklet he is still married to his Jo Ann, and is a preacher nowadays - get 'em to the Rave, but tell 'em he I Saw The
Light can't sing! Even more first choice rock 'n' roll is served by Chuck Royal & the Sharpsters (My Baby's Gone, You're Like A Butterfly), Pat LaRocca (Rowena), Toby & Ray (Bom Du Wa) and The Fretts (Rockin' Baby). The CD also contains rockabilly by Gradie Joe & the Western Gents (Rock-A-Billie Music, one of the few songs from the fifties with the word "rockabilly" in the title) and Clyde Arnold & the Sharps (I've Got A Baby and the instrumental Scrounge), white rock (Baby Oh Baby by Gradie O'Neal & the Bella Tones), dangerous doo wop (Rockin' Mary by Wes Griffith & the Treys), female rock 'n' roll (Gonna Be Loved by Linda & the Epics) and a touching attempt at toe rock (Baby Don't Go by Buddy Bennett & the Margilators). Country influenced material includes Blue Moon Keep On Shining (which has nothing to do with Blue Moon Of Kentucky) by Chuck Royal & the Sharpsters and the Blues Stay Away From Me copy It's Blue Monday by Gradie Joe & the Western Gents, complemented by hillbilly boogie like Bayou Ball from 1953 by now 96-year-old Shorty Joe who performed until the 2000s. Get 'em to the Rave, but tell 'em not to sing Jambalaya ! At the opposite end of the musical spectrum in the form of big band rhythm 'n' blues jive is provided with Bon Bon Bay by Joe Jaros, and the instrumental work of The Empala Six that listens to titles like Travelin', Empala Rock, Double Time and Sweet And Sour combines surf guitars with tittyshaker saxes. Add to that theme tracks like The Mortal Monster Man by The Savoys (in contrast to most novelty horror rock 'n' roll songs a tough rocker) and two Christmas songs, the primitive rocker The Rocking Tree by singer Marguerite Trina and the black doo wopper Rockin' Santa Claus by The Martells, and then you know we are nappies in our rock 'n' roll. To all of this toughness, extra authenticity is given because most of the songs have a rather primitive sound, perhaps because the majority of the songs were recorded in a garage that served as a studio, making them far away from the slick sound of the major labels. On top of that, most of the tracks were transferred from the original 45 rpm records because of course there are no master tapes anymore of these obscurities and then you know it's going to pop unpolished with saxophones that sound like horns and on some songs even trumpet. The CD is as always in this excellent series accompanied by an exemplary booklet on CD format of 28 pages with never published photos and track by track info. You have your hearing and your reading !

You're sitting on J. Gonzales' car!