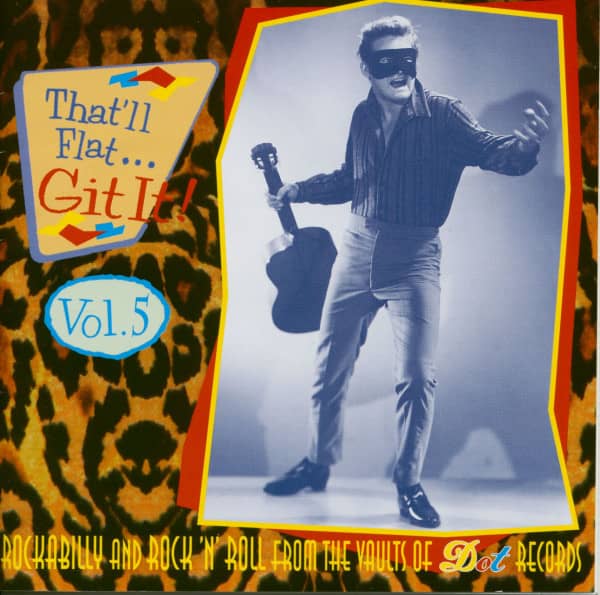 Rockabilly from the vaults of Dot Records, pure, 5-star, high octane Fifties rockabilly.
Back in 1992, we decided that Rockabilly sounded good on CD, so we had the idea that we should create the all-time definitive Rockabilly series, "That’ll Flat Git It!"
Above all, Rockabilly was music recorded for 45RPM singles, so we designed a Rockabilly series label-by-label instead of artist-by-artist, and we compiled it for listening pleasure. Just the great stuff, plus a few super rarities.

Every CD would be for the most part a 30 song jukebox of the finest Rockabilly ever recorded for all the great labels. We sourced the very best sounding tapes and took them to the best mastering engineers, and then we took the packaging to a new level. We adopted the catchphrase of the first Rockabilly dee-jay, Dewey Phillips, "That’ll Flat Git It!", and we hired Bill Millar, who'd compiled the still-classic label-oriented Rockabilly LPs in the 1970s and 1980s, to write the notes. We looked for previously unpublished photos, and tried to find all the artists who'd never been found before. The result is a truly definitive Rockabilly series that now runs to twenty-seven volumes.

Virtually all of the independent record companies that began life in the late 40s and early 50s have disappeared. It's true that Atlantic Records is still around as an ongoing concern, and logos like Chess, Specialty and Sun still grace the occasional reissue, but, as the labels' original owners grew tired of the business or simply went bust, the catalogues were sold. Dot Records for instance has been absorbed and its identity lost in several corporate megadeals. During the 50s and early 60s, the label sold millions and millions of records, although--it must be added--the records on this compilation didn't do much for Dot's profit picture.

Dot Records was launched in January 1950 by Randy Wood as an offshoot of Randy's Record Shop, his mail order business in Gallatin, Tennessee, some 30 miles northeast of Nashville. Wood, born in McMinnville, Tennessee, left the U.S. Air Force in 1944 and put his savings into an appliance store. Two years later, he converted his business into a record store, and pioneered mail-order record sales via Gene Nobles' show on WLAC, Nashville. Wood entered the manufacturing business when Nobles discovered R&B singer Richard Armstrong. The two men co-operated on three labels: Randy's (on which Armstrong made his debut with Gene Nobles' Boogie ), Record Shop Special which featured bluesman Cecil Gant, and Dot.

Dot really hit its stride when Wood stumbled on the formula of having pop artists like Pat Boone cover R&B and country songs. As early as 1955, Dot had cornered almost 15% of singles sales, and Wood was being courted by ABC who wanted a record division (CBS had Columbia and NBC owned RCA). He held out for the big payday, though, which came in 1957 when Dot was bought by Paramount Pictures for $ 3,000,000. Wood stayed on as head of the company.

To his credit, Randy Wood was willing to try anything that he felt had an outside chance of making it. That eclectic approach secured a surprising number of left-field hits, and a good number of flops including LLOYD 'COWBOY' COPAS's Circle Rock. I don't know if Copas habitually broke wind after a skilletful of beans, but the cowboy image was something he fostered. He claimed, for instance, to have been born on a ranch in Oklahoma when, in fact, he came from Blue Creek, Ohio. In 1927 he played with the Hencacklers' String Band, by 1935 he was half of a duo with fiddler Vernon Storer, and in 1945 he joined Pee Wee King's Golden West Cowboys. The following year, he became King Records' first bigtime hillbilly act when he broke through with Filipino Baby, although by 1952, his career had slumped. In an attempt at resuscitation, he dropped the name 'Cowboy' and turned - at the age of 43 - to rock 'n' roll, sounding as if he'd invented the music. Circle Rock was written by (cue trumpets) Herb Alpert and Lou Adler, it was one of their earliest recorded compositions originally cut by the Salmas Brothers on Keen, for whom Alpert and Adler worked as staff songwriters.

Circle Rock didn't revive Copas's fortunes, but at the turn of the 60s Alabam (#1 C&W), brought him back to the attention of a younger audience. He was capitalising on this surprising renaissance when he perished in the 1963 plane crash that took the lives of Hawkshaw Hawkins and Patsy Cline.

Jerry Lott, a.k.a. THE PHANTOM, was born near Mobile, Alabama in 1938 and moved to Leaksville, Mississippi during infancy. He played country music until 1956 when Elvis Presley turned his head around. Love Me, recorded in Mobile in the summer of 1958, is one of those rare, lusty explosions which crackle with more energy than the national grid. "I'd worked three months on the other side (of the record)," he told Derek Glenister. "Somebody said, 'What you gonna put on the (flip) side?' I hadn't even thought about it. Someone suggested I wrote something like Elvis 'cause he was just a little on the wane and everybody was beginning to turn against rock 'n' roll. They said, 'See if you can spark rock 'n' roll a little bit'...so that's when I put all the fire and fury I could utter into it. I was satisfied with the first take, but everybody said, 'Let's try it one more time.' I didn't yell on the first take, but I yelled on the second, and blew one of the controls off the wall."

If all goes to plan, you get the second take here. Apart from introductory screaming, it's faster, noisier and more hysterical than the first (which appeared on Anchor's 'Cotton Pickin' Rock' anthology in 1978). "I'm telling ya," Lott continued, "it was wild. The drummer lost one of his sticks, the piano player screamed and knocked his stool over, the guitar player's glasses were hanging sideways over his eyes..."

Lott took the master to Hollywood. On a Satanic impulse, he followed Pat Boone to church and persuaded him to listen to the tape. The Devil was surely working overtime that Sunday. It was Boone's idea to call Lott 'The Phantom' and he even agreed to issue the record on his own label, Cooga Mooga (a euphemism for God, as in 'Great Googa Mooga'). In the event, Lott signed a contract with Boone's management and never met anyone at Dot, who released Love Me in 1960. In 1966 this screaming bundle of testosterone sustained paralytically severe injuries when a car in which he was travelling tumbled 600 feet down a mountainside near Spartanburg, South Carolina. There were no more records on Dot or Cooga Mooga (although a mediocre fragment has surfaced on a White Label collection).

Review 1
Read, write and discuss reviews... more
Close menu
Customer evaluation for "Vol.5 - Rockabilly From The Vaults Of Dot Records (CD)"
From: Rainer F. On: 23 May 2017