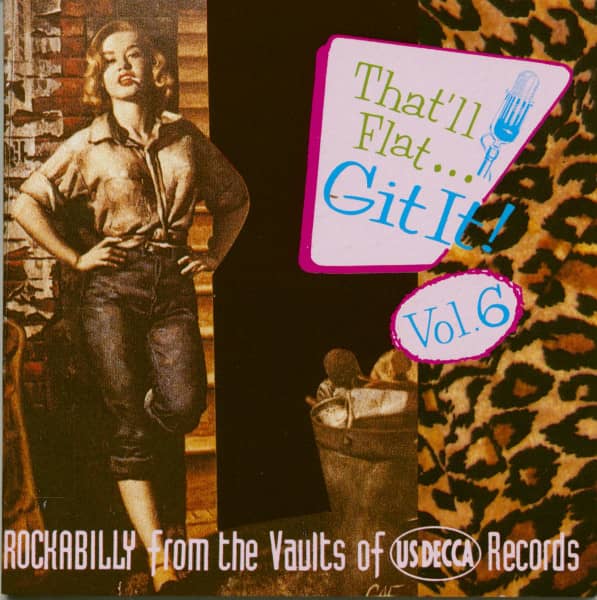 1-CD with 40-page booklet, 30 tracks. Playing time approx. 69 mns.
This CD, the sequel to 'That'll Flat Git It! Volume Two, Rockabilly From The Vaults Of Decca Records', contains a further 25 tracks (with 5 additions) from 'Rare Rockabilly' Volumes One to Four, the British MCA series issued between 1975 and 1978.

The sounds which emerged from Owen Bradley's Nashville studio still reside at the core of this collection and most of the tracks bear the stamp of Grady Martin, the unsung de facto producer and major architect of the rockabilly guitar. Overall, however, there are wider parameters here. As well as Nashville, there are tracks from Los Angeles, Alabama, upstate New York and even Times Square. For the younger singers E.A. Presley defined a style that overcame regional variation but there's an uncalculated and febrile edge to most of their mimicry. Older C&W musicians preserved the effervescence of pre-rock styles including western swing and hillbilly boogie; their relaxed, experience-laced voices add an extra dimension to a maniacally exhausting music. Unlike its predecessor, not all the tracks here can be bandied about in the same sentence as classic but every ingredient of the rockabilly stew is present and there is still a great deal to enjoy.

Brief details about Eddie Fontaine, Roy Hall, Don Woody and Billy Harlan appeared in the booklet which accompanied 'That'll Flat Git It! Volume Two'. This set includes Fontaine's version of One And Only, a tune originally recorded as Only One by Don 'Red' Roberts on Chart. Fontaine died of throat cancer on April 13, 1992. He claimed to have been born in 1937 but he was older than he looked and 1927 is probably nearer the truth.

There are three more of Roy Hall's pounding country-boogie rockers including Move On, a song first recorded under the title of Carry On, by R&B singer Clarence Garlow who also wrote it. Jimmy Newman revived the tune for Dot Records in 1958 (see Bear Family BCD 15469). Morse Code completes the quartet of songs which Don Woody cut in 1956 and no searching sweep of the Decca-Brunswick archives could possibly omit Billy Harlan's Schoolhouse Rock.

best Sputnik song ever thanks