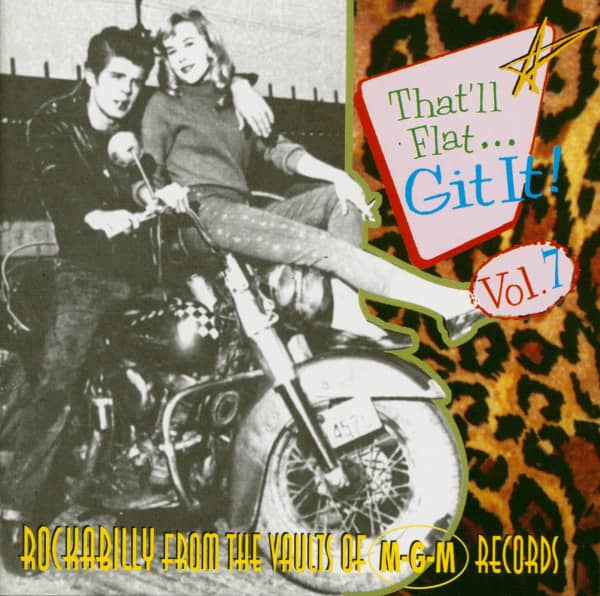 1-CD with 44-page booklet, 30 tracks. Playing time approx. 70 minutes
'A contagious beat, accented by slapping the bass strings; the chopped rhythms of the acoustic guitar; an occasional skittering fiddle; blistering electric guitar solos and the hiccupy, nasal, experience-laced voices of genuine Sam hillbilly singers. These are the hallmarks of the best rockabilly, and this album has those ingredients in abundance. Perhaps the most authentic rockabilly collection to date, there's plenty of real, hard walloping 'bop' to it."
Those words which introduced 'The MGM Rockabilly Collection'  (the first of two such volumes)
in 1977, is equally applicable to this anthology which incorporates the best tracks from both albums and adds a handful of blue collar boppers from the same black and yellow labelled source.

MGM Records was the child of Frank Walker. Hired in 1945 by the parent Loew's Corporation to set up a record division, Walker's first releases appeared in 1947. A native of upstate New York with a background in musical theatre, Walker nevertheless had a good ear for country and blues music.

He had been an A&R man for Columbia, Victor and V-Disc, and will go into the history books for signing Bessie Smith and Hank Williams to Columbia and MGM respectively. There was a straight line between Hank Williams' up-tempo country dance tunes and rock 'n' roll. Williams ensured that country music was a part of MGM's future, and as well as the many teenaged singers galvanised by Presley's success, the roster also contained a number of veterans who compromised their principles in a last-ditch attempt to jump aboard the rockabilly bandwagon.

The hero of this set isn't Frank Walker who was nearing retirement (Marvin Rainwater thought he was a little senile) or Wesley Rose (the MGM producer who claimed that if Hank Williams had lived there wouldn't have been any rock 'n' roll) or even Jim Vienneau (the company's country A&R man whose main qualification for the job appears to be that he was Frank Walker's neighbour on Long Island).

Listeners must nod instead in the direction of Gainesville, Texas, just a few miles from the Oklahoma border, where Joe M. Leonard recorded Buck Griffin and Andy Starr for his tiny label, Lin Records. Leonard, a wealthy oil man according to Starr, also managed KGAF in Gainesville and promoted personal appearances by young rockabilly hopefuls including Elvis whose Sun singles had yet to catch on in north Texas.

In a move reminiscent of Presley's deal with RCA Victor, Leonard placed Andy Starr on MGM in agreement with the Aberbach Brothers and their New York publishing /house. Hill and Range.
Promises of Presley-scale promotion were not fulfilled however and Starr languished in undeserved obscurity as did Buck Griffin who followed in Starr's footsteps to MGM.

Other artists on Leonard's small but impressive label wound up on Imperial, including Ken Copeland, the balladeer turned evangelist whose Pledge Of Love nudged the Top 20 in 1957, and the Strikes, the little-known but formidable band who contributed so much to Andy Starr's sound.