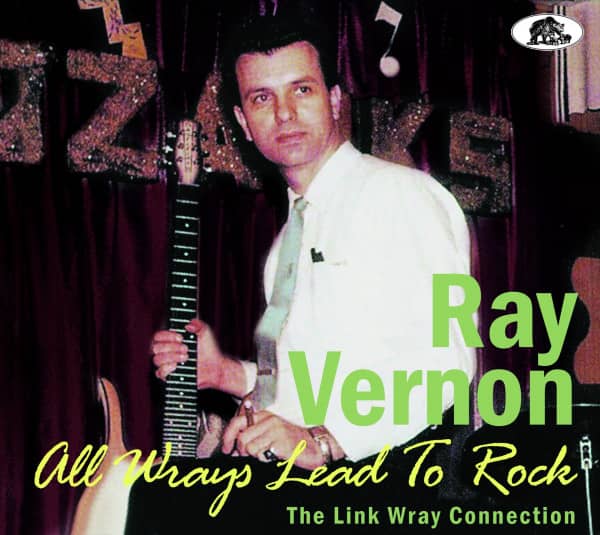 ​1-CD Digipak with 28-page booklet, 34 individual tracks, playing time approx. 78:30 min.
Serious talent ran in the Wray family. We all know the mighty Link Wray, king of the power chord and as bone-crushing a rock guitarist as ever came down the pike. But we all owe a debt of gratitude to his big brother, who went by the handle of Ray Vernon. Not only was Ray a talented vocalist who briefly tried to gain traction as a '50s teen idol on Philly's Cameo label, he guided Link's career during the '60s and produced classic 45s on his sibling as well as the considerably less familiar artists featured on Bear Family's ‘All Wrays Lead To Rock,' a 34-song extravaganza spotlighting Vernon's prodigious studio skills.
Working out of Washington, D.C. and then a basement studio in Accokeek, Maryland, Ray Vernon helmed gems by The Dial Tones, The British Walkers, The Moon Men, The Wray Brothers and Ray Men (naturally), even rockabilly hero Marvin Rainwater. Perhaps Ray's crowning achievement (other than producing some of Link's greatest instrumentals) were the six crunching sides he cut on R&B vocalist Bunker Hill (actually lapsed gospel singer David Walker), including the thundering two-part 1962 hit Hide & Go Seek—and they're all aboard this collection (as are some of Ray's own fine vocal efforts). Nail down your furniture--The Wray brothers are here to shake the foundations of your domicile!

All Wrays Lead To Rock

Can't wait to listen to that! What a great idea to focus on this artist and producer! Ray Vernon the elderly brother of guitar man Link Wray!