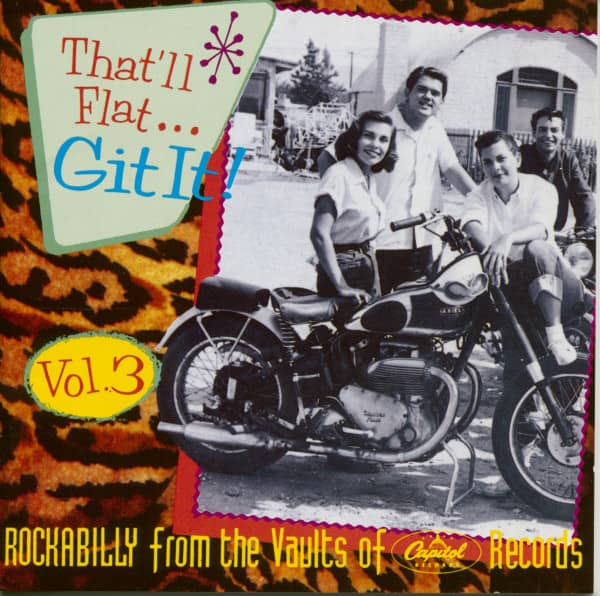 A rhythmic hard-driving blend of country and blues, rockabilly blazed out of the South during 1954. The prerogative of Southern whites, it was deftly played on a handful of instruments - the chopped rhythms of the acoustic guitar and slapped bass provide a pulse while boogie piano and searing, amplified guitar solos are generally well to the fore.

Young, white country boys sang with an aggressive fervour, striving to break the black monopoly on music with a beat. Commercial enterprize caricatured these rough-hewn characteristics and rockabilly soon slipped into self-conscious imitations of itsef; it lingered on in the South but as a national chart force, it died within a couple of years.

While rockabilly lasted, Capitol Records joined other major labels in their scrambled attempts to match the solid catalogues of Sun, Starday, Meteor and other Southern independents. They signed comparatively few youthful musicians relying instead on a long established and hugely successful roster of older singers who willingly flirted with this most vital of country's sub-styles.

Country performers - the Louvin Brothers, Skeets McDonald, Tommy Collins and others - brought experience - laced voices and an air of farmhand authority to the music. Younger singers, like Tommy Sands and Johnny Fallin, were more concerned with calculated but no less enthusiastic attempts to produce a teenage rock'n 'roll record. Either way, the real hero of this compilation is Ken Nelson, the producer and A&R head of C&W  who first worked for Capitol in 1947.

Nelson, who was born on January 19, 1911 in Caledonia, Minnesota, spent many years as a singer and banjoist in Chicago. His association with country music began in 1940 when he worked as an announcer on WJJD. Capitol hired his friend and fellow announcer, Lee Gillette in 1944; Nelson fell in with the company when Gillette was told to produce sessions in New York and couldn't drop what he was doing in Chicago.

Nelson was asked to step in and began to produce pop records without any clear idea of what he was doing. Buttons And Bows by the Dinning Sisters went Top 10 in 1948. That same year, he was switched to Hollywood and the transcription department. Thereafter, he took over theC&W division where he remained for more than 25 years.

Nelson discovered acts by taking bus all over the country, stopping off at clubs and saloons to hear who was playing and what people most enjoyed. He claimed to be the first man to use drums on country records and to have foreseen the popularity of Elvis whom he tried to sign. He recorded in Nashville, Dallas and Los Angeles where he worked in close association with Gillette's right-hand man, Cliffie Stone. Basically, Nelson looked for music to which listeners could relate emotionally but 'once in a while' he told Billboard Magazine 'you get a hold of a record with a fantastic rhythm that will stir people musically,'

Whether it's the relaxed but significant early rumblings of Dub Dickerson or the rafter-shaking punch of the Rio Rockers this set is all about rhythm. Nelson, who enjoyed show tunes and classical music, probably preferred 'Buttons And Bows' to 'Be Bop A Lula' but his vision, commitment and innovative spirit abled him to produce rock' n'roll without imposing his own artistic values on it.