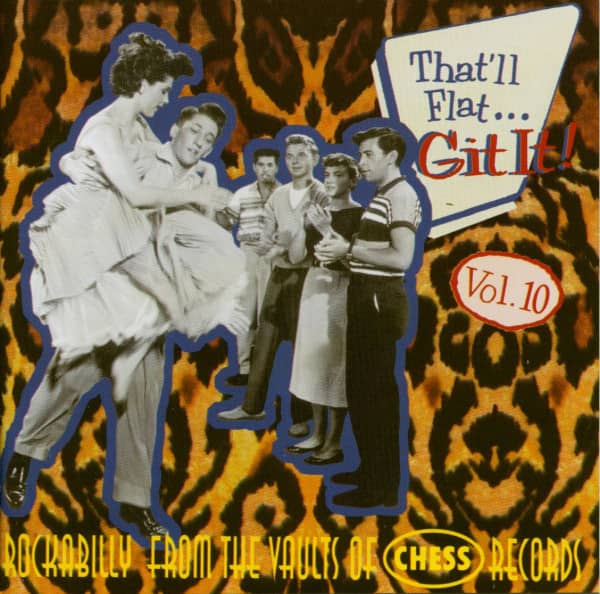 Leonard Chess (real name Lazar Shmuel Czyz - pronounced Chez), and his younger brother, Philip. were Jewish immigrants from Poland who settled in Chicago in 1928. They worked their way into the liquor business and by the 1940s they owned several taverns on Chicago's predominantly black South Side, venues like The Macomba which attracted jazz musicians and jump blues bands.

Noticing the lack of recording facilities for the artists booked into his clubs. Leonard Chess bought into Evelyn Aron's Aristocrat label in 1947. The success of Muddy Waters drew a host of significant Chicago bluesmen to the label which changed its name to Chess in 1950. The Checker subsidiary was added in 1952. Argo in 1956.

The company's influence on rock 'n' roll and the English beat boom was huge: it's almost impossible to imagine either landscape without the contributions of Chuck Berry and By Diddley. Although Berry was described as a 'Rock-A-Billy Troubadour' in the sleeve-note to his first Chess album, the company's chief rockabilly artist was Susie O hitmaker Dale Hawkins. He's represented here with his second biggest hit but several other selections also fall under his spell.

The Chess brothers recorded Bobby Sisco and Billy Barrio in Chicago at Bernie Clapper's Universal Studios and some of Dale Hawkins's finest tracks at Sheldon Studios which had the most distinctive state-of-the-art echo chambers. But in the main they bought in masters from all over the USA. There are records here from Cincinnati, Nashville, Oklahoma City, Houston, New York, Oakland, Shreveport and Cleveland. Whatever the source, the Chess brothers ensured that their releases received exposure via their close and profitable relationship with Alan Freed, the popular dee-jay who was rewarded with co-composer credit on some of the label's earliest pop hits including Sincerely and Maybellene.

It was probably Freed who introduced Leonard Chess to Gene Goodman, the New York-based owner of Regent Music. Another story suggests that when Leonard went looking for a deal in New York, Goodman (brother of Benny) was the only publisher willing to talk to him; everyone else was glued to the baseball world series. In any event, the two men set up Arc Music in 1953. This handled the material recorded by Chess and swiftly developed a well-stocked library of blues and rock 'n' roll copyrights. Arc Music usually acquired half the publishing on masters which Chess purchased and thus shared ownership of songs with Jimbo Music (Rock Yea), B Flat All Night Long), TJ (Why Did You Leave Me), Bon Bon (Cool Off Baby), Ashna (Save /t), JEC (Little Girl, Little Girf) etc.

Leonard Chess sold his label to General Recording Tape (GAT) for $ 6.5 million in 1969 and died of a heart attack later that year. He was 52. The Chess brothers were originally bewildered by Muddy Waters's slide guitar playing and there's really no reason to suppose that they liked rockabilly or understood this tiny proportion of the Chess catalogue any better. But Leonard Chess was astute enough to press Bobby Sisco into service ("Come in quick...you got the Carl Perkins sound and that's what's selling") and ruthless enough to leave a Dale Hawkins sound a like, Maylon Humphries, on the shelf.
(Bill Millar, Bear Family Records 2000)