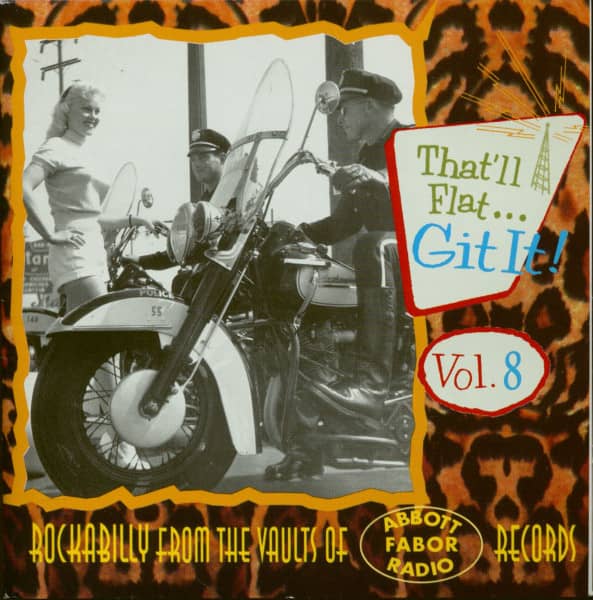 1-CD with 36-page booklet, 32 tracks. Playing time approx. 68 mns. - Rockabilly from the vaults of Abbott, Fabor and Radio Records, ultra-rare and unissued gems!
The Fabulous Fifties were wide open for someone with an entrepreneurial spirit -and this was especially true in the business of making records. The major labels were not really in tune with what was happening. Almost by default, they let the independents develop the innovators, then bought in hits. When an indie label had a pop hit, each of the majors would take one of their artists and cover it. As a result, there would be three or four versions charting at the same time. Great for the publishers, but less so for the artist's sales.

The independent labels had to beat the bushes to discover their own artists and hits. They usually liked to cut themselves in on the song or at least have the publishing in the event that a major label would cover them and steal the hit with superior distribution. It was an exciting time when Fabor Robison could discover Jim Reeves on the suggestion of a Tom Perryman, or find Mitchell Torok in Nacogdoches, Texas when enquiring about local songwriters.

Fabor Robison was from Beebe, Arkansas, and worked as a cook in the Army during the Second World War. He moved to California after the War, and worked as a cook and a prop setter at MGM. Setting himself up as an agent, Fabor signed country singer Les 'Carrot Top' Anderson. Anderson was born February 20, 1921 in Siloam Springs, Arkansas, and Robison placed him with Les McWain & Corydon Blodgett's Cormac label before moving on to the major Decca label.

When Fabor began managing Johnny Horton, it was inevitable that Horton would sign with Cormac as well. Robison was a hustler, but he was on the mark when he started the Abbott label with funding from Sid Abbott, proprietor of Abbott Drugs. After Cormac folded, Robison acquired the Horton masters and Abbott was off and running with distribution by Bill McCall's 4-Star Records.
The first ten releases on Abbott featured Johnny Horton, two of them duets with Billy Barton. The early Abbott sides might have been regional hits, but it took seventeen releases before Fabor attained the hit he had dreamed about. Jim Reeves' Mexican Joe was a number one hit in early 1953 and was written by Fabor's next star Mitchell Torok. who took his self-penned song Caribbean into the top five in August 1953.11 was at this time that Fabor purchased full control of Abbott and launched the Fabor label in October of the same year.The money was starting to pour in and Robison thought another label would be a wise investment.

The Radio label was started in 1958 to handle the pop and rock & roll that was becoming increasingly popular. Some of Robison's Abbott and Fabor artists such as Bonnie Guitar. Ned Miller, Billy Barton and Johnny Russell appeared on the label, but mostly it was young hopefuls. While Robison had no hits with these youngsters, it showed his keen eye for talent as Bobby Lee Trammell. Dickie Podolor (as Ritchie Allen), Bonnie Guitar, Johnny Russell, and Robert Luke Harshman (as Bobby Hart) would have long and significant careers in the music industry.

Fabor was a difficult man, who seemed t, have the ability to drive away anyone who was successful for him. He would concentrate on one artist at a time - the hot one - and as a result would alienate his others. His paranoia about losing his artists to major labels or being cheated by the distributors seemed to become a self-fulfilling prophecy. Probably only Robison knew exactly what he had licensed or sold to whom and when. He first folded Abbott in 1952 to get out of his distribution deal with 4-Star. At some point in the mid-1950s, he and Russell Sims (who worked for him and later founded Sims Records) divided the assets. Fabor sold his Jim Reeves. Brown, and DeCastro Sisters masters to RCA at various points, and Sims sold the Johnny Horton masters to Pickwick International.

Then. in 1957, Fabor started up again. and in March 1957, he gave first refusal on all his new productions to Dot. By this point, he had his own studio in his house in Malibu: it was, by all accounts, a good-sounding studio. In 1959, he sold his music publishing and some masters to Jamie/Guyden Records. He re-started Fabor in 1962 and scored a giant hit with Ned Miller's 1957 recording of From A Jack To A King. Then he sold all of Miller's catalog and his contract to Capitol in 1964. He produced Miller again in the late 1960s, and then went to Brazil. "Dodgin' the world," as Russell Sims said. Sims and some others bought a 16-track recorder from Bill Justis and sent it to Fabor in Brazil, but Fabor ran out of money and sold it to pay his way home. In the 1970s or 1980s, he sold off whatever was left (together with some masters he had previously sold elsewhere) to Shelby Singleton, the ex-Mercury A&R man who had bought Sun. From that point. he disappeared. He had left his wife, Mary. and married again for the third time in Brazil. He and his third wife had a son who died in a drug deal. Fabor himself was seen in Louisiana and Texas, and word reached Nashville that he died around ten years ago.

Robison's early forays into the music business had been partly funded by Sylvester Cross at American Music. In return, Cross wanted the publishing on anything that Robison found, but, not long after Mexican Joe, Robison weasled out of that agreement and started Dandelion Music. Because he saw the rewards that Dandelion brought him. he insisted his artists record only songs published by Dandelion. While it may have been profitable, it was a shortsighted approach to developing major artists. The artists would leave for labels that would let them record outside material. Robison would also return to his copyrights with different artists in varying styles or fields. Robison even got into the act himself recording under his own name instrumental versions of songs he previously recorded and published like Whose Little Pigeon Are You and Stop The Clock Rock. (Wayne Russell, Bear Family Records 1995)