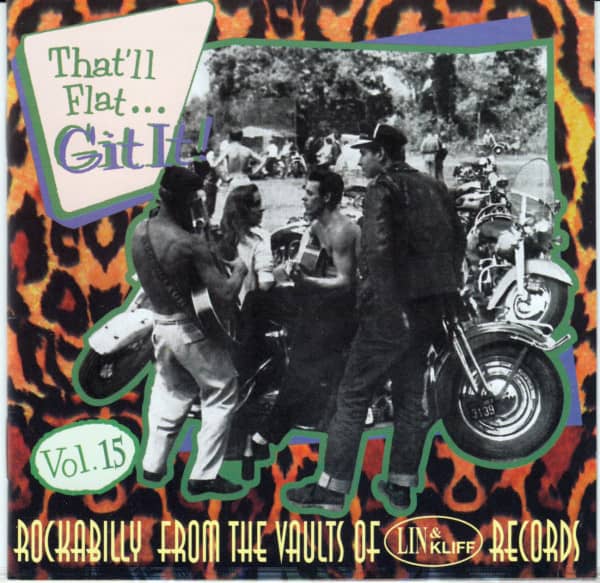 1-CD with 24-page booklet, 26 tracks. Playing time approx. 59 mns.
Rockabilly from the vaults of Lin/Kliff Records!
"This is the kind of stuff that you need to be doing. Forget the hillbilly and country and western."
Alta Hayes, counter person at Dallas’ Big State record distributors, playing an early Elvis Presley Sun release to Joe Leonard, 1954.
Producer and label owner Joe Leonard of Gainesville, Texas, has recorded a wide variety of music over the years, from his first session in late 1953 to the present day, not only that he waxed for his own Lin Record label from '53 to '68, but also the material he leased to other labels like MGM and Imperial through his Leonard Productions. His output ran the gamut from honkytonk & western swing to pop, rhythm and blues, rockabilly and rock 'n' roll, with an occasional spoken word, children’s record or gospel release thrown in, too.
There were hits and misses, though more hits in a musical sense than a commercial one. Lin Records enjoyed only one real chart hit, Ken Copeland’s Pledge Of Love in 1957. There are memorable sides from Lin’s early country sessions and some strong pop releases, but unquestionably Leonard's lasting significance, as a producer and as a label owner, stems from his early grasp of the commercial possibilities of rockabilly and rock 'n' roll and his subsequent exploration of those styles, initially long before most sensed their viability.
Bear Family has explored Leonard’s legacy previously in single CDs devoted to Lin’s most important artists Buck Griffin (BCD 15811) and Andy Starr (BCD 15845) and in a 4-CD box set (BCD 15950) that follows the winding trail of Lin Records and Leonard Productions from 1953-1968.
This collection focuses, however, on the best of Lin’s rockabilly and rock 'n' roll sides (with a few sides from sister label Kliff) from 1956-60, with representative sides from the gutsy, earthy, early work of Griffin and Starr, and the assured, tight college sextet the Strikes (also featured on Bear Family’s Imperial Rockabilly set, That'll Flat Git It, Volume 12, BCD 16102), to the smoother, pop-tinged sounds of Jerry Fuller and the Tu-Tones and the hot instrumental blues of the Atmospheres, as well as the late period rockabilly of David Ray -- to name only a few.
(Kevin Coffey, Bear Family Records 1999)