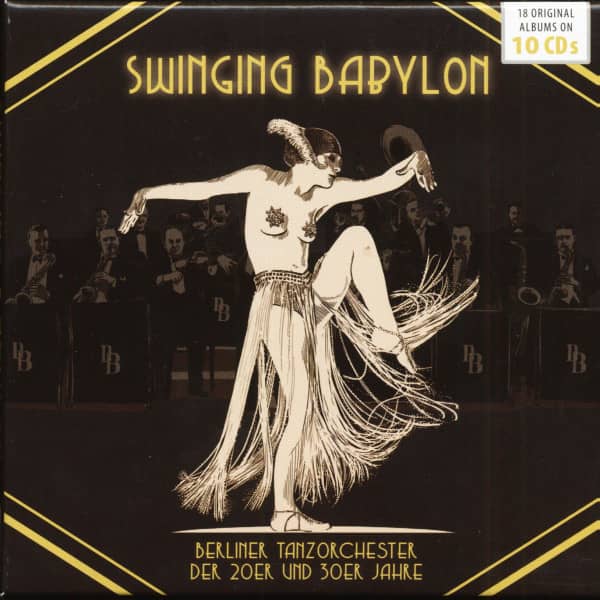 Music for the German TV series 'Babylon Berlin' - the actual soundtrack, music of the 1920s and 1930s!
Original hits and original interpreters in perfectly remastered sound quality! With hits like ''Beautiful Gigolo'', ''You're Driving Me Crazy'', ''In The Mood'', ''The Sheik of Araby'', or ''Escapades''!
In the 20's and 30's Berlin was the ''Hot Spot'' all over Europe. These 10 CDs offer a musical journey through the Berlin cultural scene of this Babylonian era between two devastating world wars. Here you can listen to all the leading artists and bands who reflect the flair of a ''Golden Era'', ambassadors of a society full of celebrations and thirsting for entertainment of every kind.
The proof lies in this box: German dance music swing until the Nazis declared Swing degenerate. Stars of the cabaret scene cavorted on the stages of establishments such as Cabarett Größenwahn, Wilde Bühne or Katakombe. The great dance bands of James Kok, Marek Weber, Efim Schachmeister, Bernard Ette, Will Glahé, Teddy Stauffer, Willy Berking and many others were known through their residencies in Eden, Adlon, Café Moka Efti or the Delphi Palace. Renowned singers like Rudi Schuricke, Max Kuttner, Leo Monosson and Paul O´Montis are also gathered in this edition.
Translated with www.DeepL.com/Translator