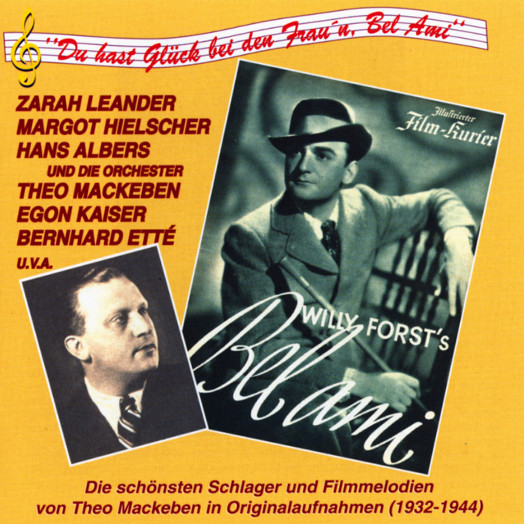 Theo Mackeben was born on 5 January 1897 in Prussian Stargard (Pomerania). He was the youngest of three sons of a garrison administrative controller and arguably the most musical of the three children. At the age of five he received music lessons, and at the age of 13 his biography recorded his first public appearance as a pianist in Koblenz. In the middle of the First World War, he began his studies in Cologne, but he could not finish, because the summoning order was not long in coming. An exemption from military service finally allows him to resume his studies at the Warsaw Conservatory.

He becomes a student of the Hungarian piano virtuoso and Liszt student Josef Weiß. This is followed by a world tour as a companion of the violin virtuoso Leopold Przemislaw and a job as Kapellmeister in the 'Berlin Lustspielhaus'. So far, the early years of Theo Mackeben, in which there are no musical and artistic highlights. This changes abruptly when he is on August 31, 1928 at the conductor's desk of the Berlin Theater am Schiffbauerdamm. He is the musical director of the 'Threepenny Opera', and a year later he also receives his world premiere under the direction of 'Happy End'. The encounter with Kurt Weill's music was the decisive artistic direction for Theo Mackeben. For this reason, it is virtually impossible to fix it today on only one musical genre.

His artistic spectrum ranges from jazz to folk dance and sound hit, to operetta and opera literature. Gitta Alpar in der Hauptrolle.">he conducts for the record company Ultraphon day pop and jazz titles under the pseudonyms 'John Morris' and 'Red Roberts', at the same time his adaptation of MillöckerOperette 'The Dubarry' with the blonde Hungarian woman Gitta Alpar appears in the lead role. He begins his work as a composer in the film studios. He writes one of his first works in this profession for the film 'Fünf von der Jazzband'. The title leaves no doubt about the character of the film music. Fanny' am Deutschen Künstlertheater Premiere.">In 1934 his operetta 'Lady Fanny' premiered at the Deutsches Künstlertheater. Käthe Dorsch und Ivan Petrovich.">In the main roles you can see Kathe Dorsch and Ivan Petrovich. In 1935 he succeeds with the score for the film 'The Student of Prague' a great musical-romantic masterpiece, which unfortunately has fallen into oblivion today, because the original score is probably lost irretrievably. (Unless there is someone who finds the music on the old film copy ...