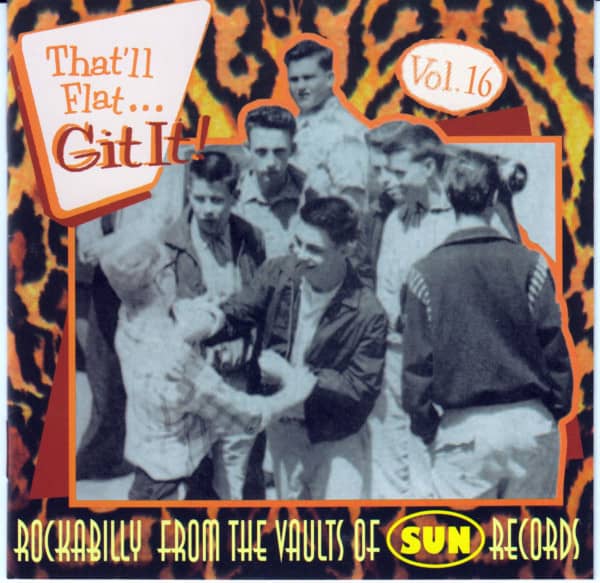 1-CD with 28-page booklet, 31 tracks. Playing time approx. 62 mns.
More Rockabilly from the vaults of Sun Records!
We're back at 706 Union Avenue in Memphis. 'That'll Flat Git It!' is about rockabilly, and 706 Union is where, to all intents and purposes, rockabilly came into being. It's now almost 30 years since the first Sun rockabilly reissue hit the streets. In that time, the Sun vault has been excavated like an Egyptian sarcophagus, but just when you thought every last bauble had been retrieved, an unmarked tape box yields something that cries out to be released.
It's not hard to understand why these songs weren't issued at the time. The performers were too rural, too raw, too unpolished to stand a chance. Without exception, though, they all imagined that they were as up-to-date as the morning paper.
This is our second volume of Sun rockabilly. Unlike the previous volume, it includes a few recordings by better-known artists such as Billy Riley, Warren Smith, Sonny Burgess, Narvel Felts, and Conway Twitty, all of whom are the subject of exhaustive Bear Family retrospectives.
The focus is still squarely on the great unknowns, though. These were the guys who came to Sun hoping to stand where Elvis stood, hoping that what happened to him would happen to them. Several indeed went on to greater things, but not singing the type of music you hear on this collection. This is unvarnished first generation rockabilly from the gravitational centre of early rock 'n' roll, Sun Records.
(Colin Escott, Bear Family Records 1999)