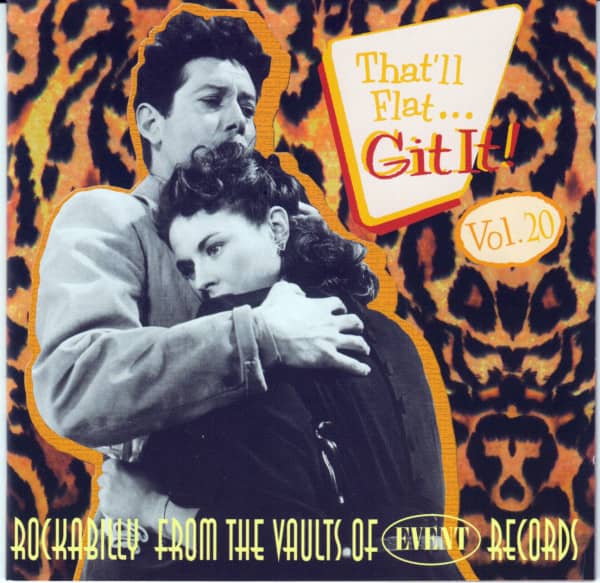 Rockabilly from the vaults of 'Event' Records!

To a great extent, the Event Records story is the Al Hawkes story. Hawkes first related his tale to Derek Glenister in 'New Kommotion magazine' (#27) in 1983, and this introduction is gratefully excerpted from that article.
Allerton 'Al' Hawkes was born in Providence, Rhode Island on December 25, 1930, and named for Isaac Allerton, the first lieutenant governor of the Plymouth Colony, which he helped establish after arriving on the Mayflower in 1620. Hawkes traces his forebears back to seventeenth century England, but after making it as far as the New World, they didn't stray far from New England. Hawkes' father was offered a teaching post in New Hampshire, near the border with Maine. From there he went to Massachusetts, then to Rhode Island (where Al was born), and subsequently took up another post in Portland, Maine.
"While I was at Junior High School in Westbrook, [Maine] I became more interested in music than I ever was before, [especially] country and western music. It fascinated me to hear guitars, banjos and fiddles - a simplistic way of producing music, and more of perhaps a natural entertainment than heavy orchestras and highly-trained vocalists." Hawkes bought a guitar and played along with the Ernest Tubb and Bill Monroe records he bought in Portland.
"When I went to Deering High School, [where my father taught], there was a teacher there who was a great inspiration to me. His name was Emery Dunfee. He was a great person to excite you with his wisdom in electronics. He was a strict teacher, and he wanted people to understand what they were doing and why they were doing it. Those two years in his electronics course was probably one of the greatest reasons for my success, and the reason why I ultimately got into Event Records. While in High School in the audio/visual section, I met Richard 'Dick' Greeley. He was working for a company part-time in Portland, installing music systems in restaurants, and he was very much interested in music.
He would be the person who I would form Event Records with..a few years later after my military service. I looked up to Dick Greeley, because he was already there in this audio/visual equipment department, and he knew a lot about recording and a lot about sound that I didn't at the time.
"After I graduated from Deering High School in 1949, I attended Massachusetts Radio & Electronics School in Boston, right behind and in the same block as the Boston Symphony Hall, where Arthur Fiedler & The Boston Pops Orchestra reigned.
I took a two year course in television repair and design, and in radio broadcast. I just wanted to learn as much as I could about electronics, knowing some day I'd be in radio broadcasting and television...which at the time was developing fast.
I studied for, and took my exams to pass the Federal Communications Commissions Broadcasting Operators permits. While I was there in '50 or '51, the Korean War was developing into quite a problem. It appeared that because of my age, I'd probably be drafted.
Every CD would be for the most part a 30 song jukebox of the finest Rockabilly ever recorded for all the great labels. We sourced the very best sounding tapes and took them to the best mastering engineers, and then we took the packaging to a new level. We adopted the catchphrase of the first Rockabilly dee-jay, Dewey Phillips, 'That'll Flat Git It!'.

We looked for previously unpublished photos, and tried to find all the artists who'd never been found before.
The result is a truly definitive Rockabilly series.