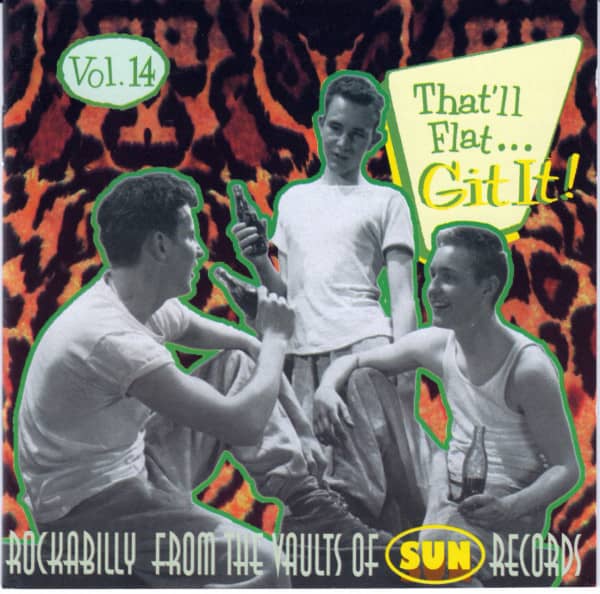 1-CD with 40-page booklet, 31 tracks. Playing time approx. 68 mns.
Rockabilly from the vaults of Sun Records!
Here’s the other side of Sun; to pun Pink Floyd, the dark side of the Sun. These are the guys who wanted to get a deal but couldn’t, or guys who once had a deal but couldn’t get Sam Phillips interested in their new stuff. In the chaos and confusion of Sun in the mid-to-late Fifties, their tapes were just marked (or sometimes not even marked) and tossed into the back room. In a sense, we’re doing the job now that should have been done then: sifting through them, trying to figure out which ones were worth a shot.
Let’s get our criteria straight. Not all of these are Sun recordings, although most are. We’ve broadened the scope to include a few demo’s sent to Sun because that’s the only way some of this music will ever see the light-of-day. At the same time, ,we’ve stayed away from artists like Billy Riley and Warren Smith who have been anthologized on Bear Family CDs, and we haven’t  included any records that appear in our definitive Sun Singles Collection series. The focus is squarely on worthy unknowns or little knowns.
The key that unlocks nearly every recording here is Elvis. Everyone knows Elvis started on Sun, and several of these guys knew him, maybe shared a Coke with him after a gig. Elvis was desperately real to them. If they could get on Sun, they could stand where Elvis had stood. What happened to Elvis would surely happen to them. As absurd, even vain, as that sounds in hindsight, you have to remember that it was a different world when these guys parked outside Sun. Elvis’s throne looked very attainable. Ray Harris remembers thinking to himself, “Hell, that boy ain’t doing anything I can’t do,“  and that was a common sentiment. In a sense, this set is a little walk down a boulevard of broken dreams. Very few of these artists managed to sustain any kind of career in music, but in the act of trying and failing they tell us more about grass roots Fifties rock ‘n’ roll than any formal history.
(Colin Escott, Bear Family Records 1997)