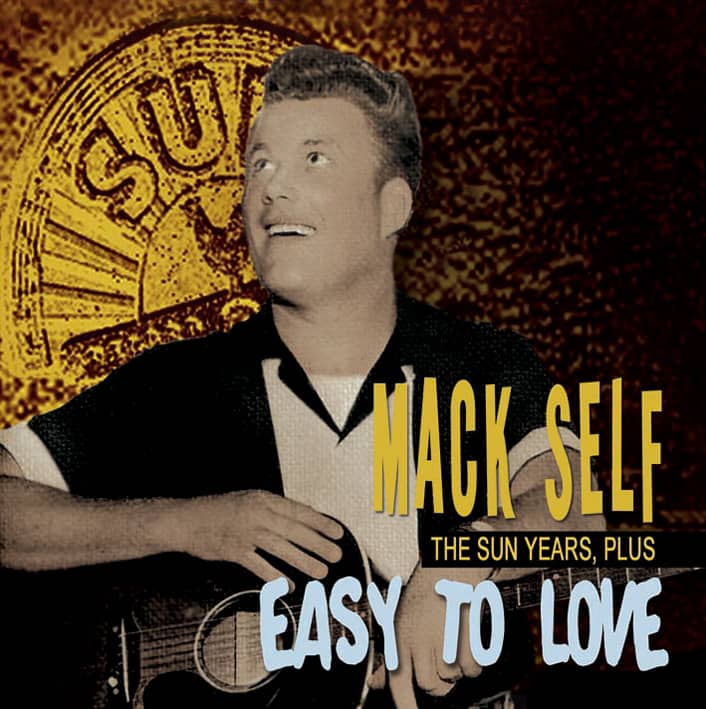 Mack Self was inducted into the Rockabilly Hall of Fame in 1998. As Mack, himself, would tell you, that probably has as much to do with his association with the legendary Sun label as it does any strong leaning on his part toward pure rockabilly. Strictly speaking, Mack never was a rocker. At least not in the sense that Sun label-mates Billy Riley and Sonny Burgess were. Riley and Burgess, by the way, shared more than a label affiliation with Mack; all three men hail from Arkansas.

The similarities, however, pretty much stop at the state line. Unlike Riley and Burgess, Mack Self was and is pure country. Sun label owner Sam Phillips, to his enormous credit, allowed Mack to be just what he was. Three of the four tracks issued by Mack on the original Sun and Phillips International labels were unabashed country songs during a period when Sun was dominated by southern wildmen. The releases adjacent to Mack's Easy To Love  (Sun 273) include Ray Harris's Greenback Dollar (Sun 272)and Carl Perkins' That's Right (Sun 274). Billy Riley's Red Hot (Sun 277) came along two months later, and Jerry Lee's Great Balls Of Fire (Sun 281) barely a month after that. The same was true of Mack's Mad At You, issued on Phillips International 3548. Adjoining releases on the label included Charlie Rich's Rebound, Carl Mann's Rockin' Love and Sonny Burgess' Sadie's Back In Town. All in all, Mack's "pure as country water" offerings were surrounded by some pretty hard-edged rockin' company

Even Mack's uptempo songs like Mad At You contained down home lyrics like "My cow's gone dry/The hens won't lay." His Going Crazy – a track that never saw light in the 1950s - offers lines like "You got me barkin' like a dog/ rootin' like a hog/ skinning saplings/ eatin' paw paws. " It doesn't get much more country than that.

For all his back-country charm, Mack Self remains beloved by rockabilly fans and collectors. This is pretty easy to understand. Years of Sun archaeology has unearthed undeniable rockabilly gems by Mack like Vibrate and Lovin' Memories. Although they were never released during the 1950s, these tracks provide strong credentials for Mack's Hall of Fame status. At a personal level, Mack Self is a man who, as Johnny Cash sang, "was there when it happened." Self's sessions included players like Roland Janes, Stan Kesler, Jimmy Van Eaton, Johnny Bernero, W. S. Holland, Billy Riley and Martin Willis. The man in the control room hitting the record button was either Jack Clement or Sam Phillips. The bottom line is that Mack's name appears on nearly a dozen tape boxes full of songs recorded at what he calls "that little ole rinky dink studio" in Memphis. He's the real deal. In fact, it's good to remind ourselves that Sam Phillips auditioned both Mack Self and Harold Jenkins (a/k/a Conway Twitty) – an Arkansas running buddy of Mack's – at just about the same time. Phillips passed on Twitty and decided to work with Mack.

At the least, Mack Self is a survivor. Settling into a comfortable chair, Mack begins to summarize his life. "I'm Mack Self. I was born in 1930. I'll be 77 years old the 22nd day of May.  My daddy was a farmer and he played the fiddle. My mother played the guitar and they got me started. After that I taught myself. The first performing I did was at a street dance in Barton, Arkansas. I was about 15 years old and I sang two Hank Williams songs. I went up there with a guy named Henry Henderson. He told me about the dance and we decided to go. We stopped at a little 'grab all' grocery store out in the country and Henry got us something to drink. I took a shot of it and said, 'That's good. What is it?' He said, 'That's Bobcat wine.' I never drank nothing before that and I really still don't drink. But when I got up there I was feelin' pretty good. It woke me up a little bit. Made my nerves get right, you know?

"They had a good band, at that dance. John Hughey (Conway Twitty's steel guitarist) might have been playing with them. I'm not sure but I know they had a good steel man. I finished my songs and folks went crazy. I thought, 'Man! I'm gonna try this a while!'

More information about Mack Self on Wikipedia.org

Filter
Close filters
No results were found for the filter!
Mack Self: Easy To Love, The Sun Years, Plus Art-Nr.: BCD16519

1-CD Album with 32-page booklet, 31 tracks. Playing time approx. 71 mns. Country artist Mack Self came from Arkansas to record one single for Sun and another for Phillips International, but that doesn't begin to tell the story. It's all...
$14.20 $18.05
Sound sample
Mack Self: Vibrate (CD) Art-Nr.: CDGEE270130