Don Woody has had two careers as a rock 'n' roll singer – both of them short and low key, but both of them all the more fascinating for it. Woody was a budding disc jockey and aspiring comedian in 1956 when he started writing songs and suddenly found himself on Decca Records with a shot at becoming the next big thing in popular music. It turned out that Decca was barking up the wrong tree though and Don settled down to a different career. Many years later his music was rediscovered by European rockabilly enthusiasts and eventually, even more years later, Woody has been persuaded to make like a rock 'n' roller on the stages of rockabilly revival shows. Nowadays he lives in Texas, has a website run by fans in Estonia, and finds his old songs recorded all over the world by singers and bands he has never heard of. When I called him on the phone from England to talk about this CD he told me he was looking forward to appearing there in 2010 – and we agreed we weren't sure who was the more surprised to be having the conversation some 55 years after his first shot at making rock 'n' roll!

Donald Gene Woody was born on 29 June 1937 in Tuscumbia, Missouri and he never planned to be a singer. He told me, "My family was all from the Ozark area of Missouri and Arkansas. My dad's name was Cleo and mom was called Inez. Neither one had an interest in music and they did not play or sing." But he was fascinated by the drums as a child: "I started playing in grade school, played in the high school band and went into various competitions. I cannot play any other instrument, and I never even considered being a singer. I was keen on records though and I had the idea that I'd like to be on the radio. I started as a DJ on a small daytime radio station while in junior high school in Clinton Missouri. I worked the early shift before school in the morning, and weekends."

In 1955 Don left high school, moved to college in Springfield, and graduated to a bigger radio station. He said: "I heard about a job opening when I was looking at going to school in Springfield at Southwest Missouri State College. It was a regular commercial station. KICK was the call sign. Auditioned and got the job. It was a Top 40 type of format and was a lot of fun. I worked there all during College." 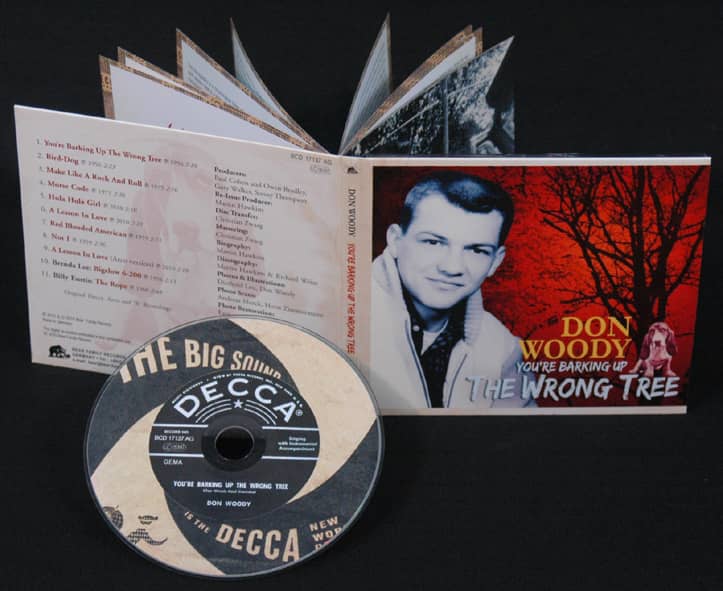 He had another extra-curricular pastime too, as a comedian. It was this that set him on his way to bigger things with the Ozark Jubilee, Springfield's emerging stage and radio competitor to the Grand Ole Opry headlined by singer and emcee Red Foley. Don remembered: "I had always been doing some type of comedy, even in grade school and high school. I developed an 'act' and performed at local night clubs in the area. In those days there was a networked TV show being produced in Springfield, a country show called The Ozark Jubilee, and all the performers would come there to appear on the show in a similar format to the country hayride shows that were around at that time. I was performing at a local club and either someone from the Jubilee show saw me or I was recommended. The show was a 'live' show broadcast from Springfield. Before the show went on the air I'd go out there and entertain the audience. I was the 'warm-up' act using my stand-up comedy routine. I met Red Foley several times just from being around the show, but did not really get to know him. I did not sing at all, but as a result of that I got to know a lot of the people involved with the show, and particularly Gary Walker, who became my unofficial 'manager'."

Filter
Close filters
No results were found for the filter!
Don Woody: You're Barking Up The Wrong Tree (CD) Art-Nr.: BCD17137

1-CD-Album digipack with 28-page booklet, 11 tracks, playingtime: 25:55. The first and only compilation of music by a rockabilly legend! Contains every recording made by Don Woody for Decca and Arco! Hear two unissued 1950s acetates!...
$14.19
Song preview
Video