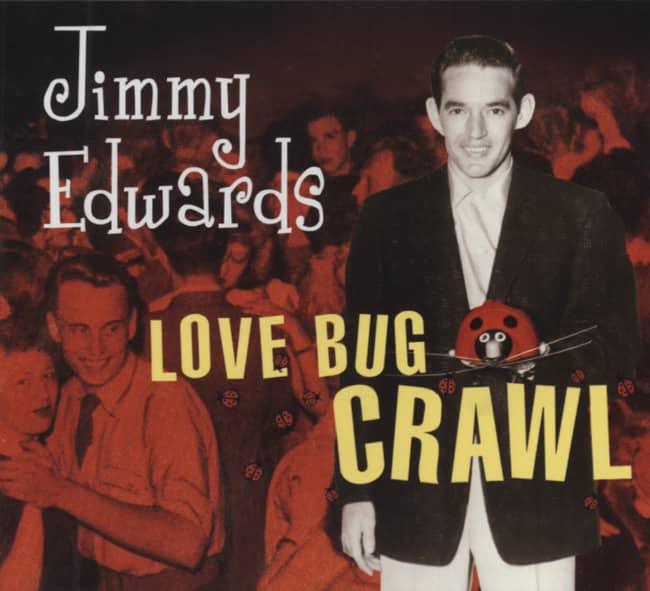 When Love Bug Crawl ascended the charts at the dawn of 1958, Jimmy Edwards became a star for an instant. Better one hit than no hit, of course. Love Bug Crawl wasn't a monster, but never quite goes away. Every so often, revivalists take a crack at it, and in 1991, a group of knucklehead country rockers, the Kentucky Headhunters, recorded it. And apparently Elvis wished he had.

James Wiley Bullington is from Cardwell, Missouri in the flat farming country in the far southeast corner of the state where it dips into Arkansas and borders Tennessee. The date has been variously reported as February 9, 1933 or 1929, and Jimmy is non-committal, so we'll assume the latter. "My mother and father owned a farm," Bullington said recently. "I farmed as a kid."  The big towns in that part of the country aren't in Missouri, but across the state line in Arkansas, and Bullington went to Arkansas State College in Jonesboro to study music. He'd sung at local jamborees and church socials, but as soon as he got out of university he was drafted into the Combat Engineers. After getting out of the military, Bullington took the hillbilly highway north to Flint, Michigan. Back then, Flint was almost a General Motors company town, and Bullington worked for GM's Buick division.

Up in Flint, James Bullington met Jack Foshee, and they wrote some songs together. Another guy on the Buick assembly line, Bill Lamb, hosted a morning show, 'Factory Whistle,' on Flint's WKMF, and later moved over to WBBC. He also owned the quaintly named Bill Lamb Record Shoppe on First Street. Somewhere along the way, he'd discovered and promoted a singing sister act, the Three Chicks, who made it to the 'Arthur Godfrey Talents Scouts Show,' and that led him to think he could do it again. Bullington and Foshee came to Lamb with a couple of songs, The Way To My Heart and Love Bug Crawl, and recorded them with some local guys in Flint. They issued those two songs on a label they owned with Bill Lamb, Wednesday Records. "Bill says, 'What do we call this label?'" Bullington remembered, "and I said, 'Well, Wednesday is always my lucky day.' So we called it Wednesday." The master numbers suggest that Lamb arranged for the record to be pressed by RCA's custom pressing division, although their pooled knowledge of the business didn't extend to placing an issue number on the record.

Bill Lamb told 'Loney Charles' that he pressed five hundred copies, but the record began generating a buzz. One of the first calls was from Archie Bleyer, president of Cadence Records. Bleyer flew into Flint with his wife, Janet Ertel of the Chordettes. He listened to the record and told Lamb that he would purchase it for Cadence, but a few days later he reportedly discovered that it was a non-union session and backed out of the deal.

After Bleyer stepped away, Love Bug Crawl came to the attention of Bob Cloud and Jim Minor, who owned Mayflower Music in Flint, and not unsurprisingly worked at GM. Jim Minor had come to Flint from DeValls Bluff, Arkansas. "I left in ’47 and went into the military," he said. "Then I went to Flint and I met Bob Cloud. He was a songwriter, and I just kinda liked the dude. We had a talent and promo agency, and I made some records for a little label up there, Chuck Wagon. At the same time, I was a dee-jay on WBBC in Flint. We heard 'Love Bug Crawl' on some little label. It was made with local boys that Jimmy knew that picked a little bit. It was nowhere near the quality that was coming out of Nashville. So Bob and I signed him to our company, Mayflower Music, and took him to Nashville to redo the song. We got Floyd Cramer, Chet Atkins, Buddy Harman, Junior Huskey, and the Jordanaires." Bill Lamb seems to have bowed out of the picture at this point. His personal taste never ran to rock 'n' roll. At last sighting, he was still alive in his late eighties.

According to an old issue of 'Rollin' Rock,' the guitar part on Love Bug Crawl was cloned from James Burton's solo on Gene Wyatt's Lover Boy, but that cannot be the case because Wyatt's record was reviewed in December 1957, some two months after Love Bug Crawl was released. If anything, the influence might have been the other way around. It's still unclear who is playing on Edwards' record. Chet Atkins, Hank Garland or Grady Martin are the logical candidates. Minor believes it was Atkins, and, as he was paying for the session, he probably remembers it correctly. His recollection that he hired the Jordanaires is dead-on, even though they're only heard on the two unissued titles that make their first appearance here. 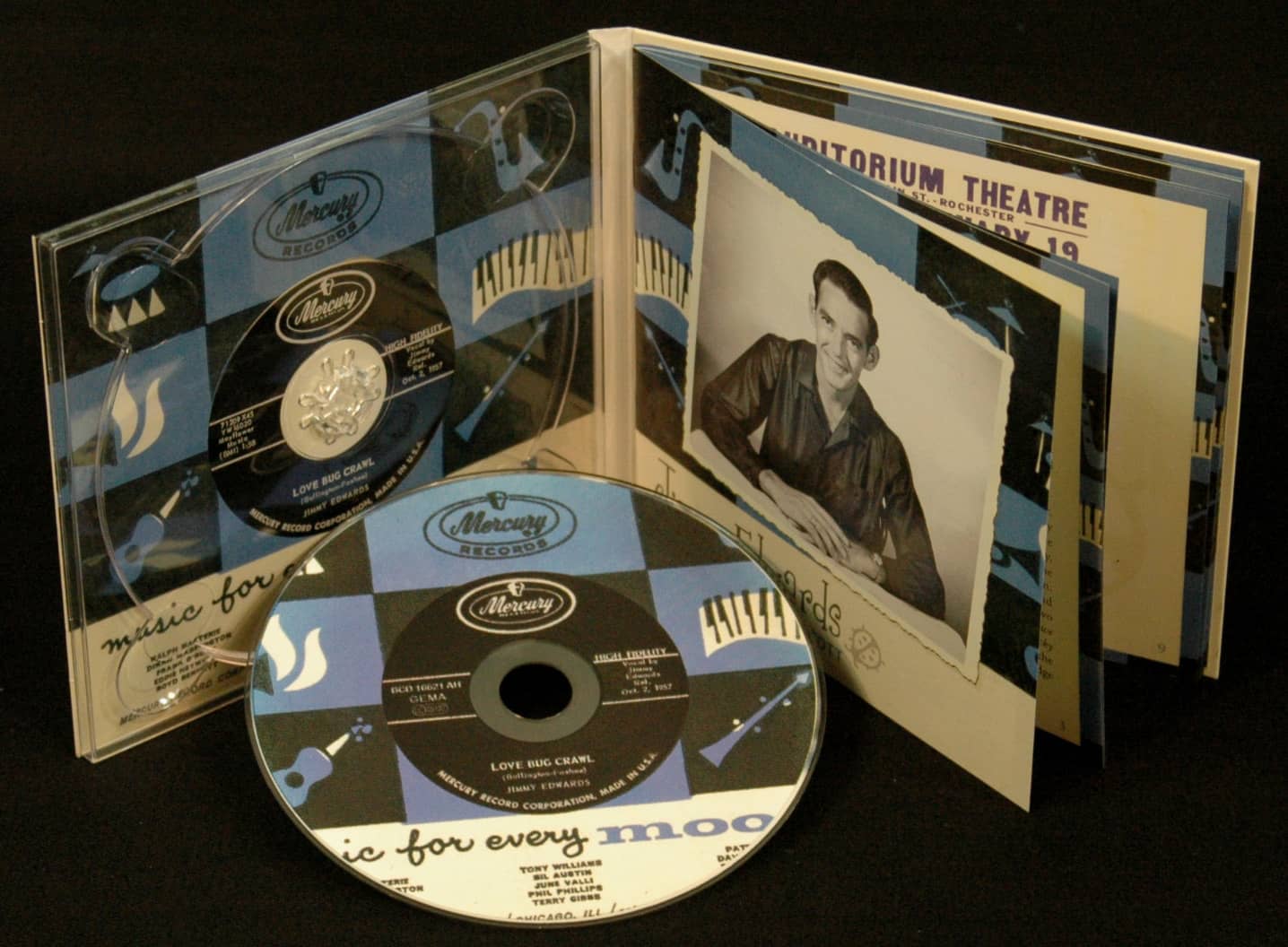 Minor continues: "I knew Art Talmadge at Mercury Records, and I sent the session to him. He liked it and signed Jimmy to Mercury. We'd paid for the session, and he paid us back when we did the deal. Art was the one who renamed him Jimmy Edwards. He said, 'Jim Bullington. Oh Lord, we can't use that.' Then he leaned back in his chair and he said, 'Jimmy Edwards. That rolls off the tongue, doesn't it.' Wasn't no point in arguing with him. His mind was made up. I always heard that Art was the one who wanted Harold Jenkins renamed Conway Twitty. I liked the Mercury guys, but they had a shotgun approach as opposed to a rifle approach. They'd fire a heap of buckshot and hope one piece of scattershot hit the target. Other companies would take their chance with one shot. Mercury would just throw 'em against the wall."

Jim Minor reckons that Edwards was driving a dump truck for an excavating company at the time his record broke, but Edwards remembers that he was working at Buick. Either way, Mercury whisked him out onto the road soon after Love Bug Crawl was issued on October 2, 1957. On October 28, 'Billboard'said "Strong disc debut by the artist whose presentation is somewhat similar to the Jerry Lee Lewis technique. The powerful rockabilly blues vocal against good backing with a pounding beat makes this a sound bet to cop teen coin."

In January 1958, Jim Minor took a leave of absence from Buick and joined Jimmy on Irvin Feld's Greatest Teenage Recording Stars tour. "I had some staunch fans in the Buick hierarchy," Minor says. "I could take off for thirty days. They didn't shut the place down when I left."  The tour ran from January 8-24, and starred Buddy Holly, the Everly Brothers, Paul Anka, Eddie Cochran, The Rays, Danny & The Juniors, Jimmie Rodgers, Margie Rayburn, The Hollywood Flames, The Shepherd Sisters, The Mello-Kings, The Tune Weavers, Billy Brown, and Al Jones. There were, remembered Minor, two busloads of stars and a semi truck hauling equipment. Love Bug Crawl began to break during that tour, and after it was over Mercury sent Edwards out on show dates. "I went all over the country," he says.

"I flew by myself, and I'd get to an airport and a Mercury rep would holler 'Jimmy Edwards, Jimmy Edwards,' and he'd take me round." One of the reps was Shelby Singleton, hired as of October 1957 to be Mercury's southern promo man. It was probably Shelby who arranged for Edwards' appearance on 'American Bandstand' in Philadelphia. The chart books say that it stalled at #78, but it was big enough to attract two cover versions in England, one by Marty Wilde and another by Wee Willie Harris.

Jimmy Edwards commuted between Flint and his homeplace in Missouri. "Where my family lived wasn't that far from Memphis," he said. "Apparently, Elvis heard 'Love Bug Crawl,' and he told someone, 'Man, I'd like to meet the guy that done that.' So I went to Graceland, went to see Elvis. We sat on the piano stool together and banged out 'Love Bug Crawl.' He said, 'Jimmy, I thought about recording it, but then I found out it was on a major label, and so I didn't do it.' I wish I'd known. I never would have recorded it for Mercury." But then, of course, Elvis probably wouldn't have heard it if Edwards hadn't recorded it for Mercury.