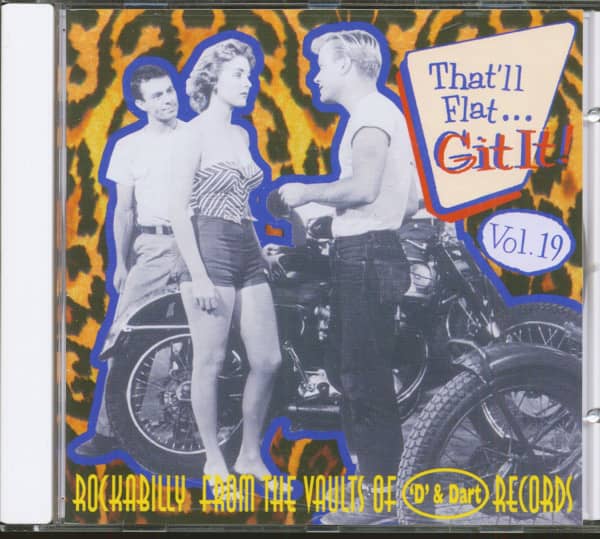 Rockabilly from the vaults of 'D' and Dart Records!

Pappy Daily's name is not exactly synonymous with rockabilly and rock 'n' roll. Indeed, he neither liked nor understood either. What he knew was country -- deep East Texas or Gulf Coast honky-tonk -- and what rocking music he cut he cut because he felt he had to in those commercially dark days for hard-core country music, the middle to late 1950s.
That said, Daily's famed Starday label issued a number of excellent rockabilly and rock 'n' roll sides from the advent of the music in 1954-55 until he parted with his half-interest in the label at the end of 1957; others were issued on the Dixie subsidiary he and partner Don Pierce formed shortly before they split.
Although Daily's 'D' label, formed as he gave up his interest in Starday, eventually became largely known as a bastion of traditional country and honky-tonk against the double-barreled assault of rock 'n' roll and lush Nashville Sound country pop, it was formed at a commercial nadir for country music and many early releases on the label were rock 'n' roll, rockabilly or, more often, heavily informed by them.
Within a few months, however, Daily and new right hand man, the veteran country deejay, bandleader and manager Gabe Tucker realized that they weren't equipped, artistically or in their market coverage to compete in pop and rock 'n' roll fields. 'D' began to concentrate increasingly on country. Although there would continue to be occasional rocking releases on 'D,' they channeled many rock 'n' roll-flavored releases through a sister label Dart.
Both 'D' and Dart became essentially 'look see' labels, chiefly vehicles for trying out and showcasing songs Daily published in his Glad Publishing Company. This is not to say that 'D' and Dart existed only for this purpose; 'D' in particular remained a legitimate outlet for regional artists, both up and coming youngsters and established veterans, through the early 1960s.
Daily continued to issue singles on 'D' well beyond the early 60s, however, though the bulk of the label's output was in the period between 1958-1961, a period which also encompassed Dart's entire existence. Between them, 'D' and Dart issued a number of excellent rockers in this period and this set collects many of the best rockabilly and rock 'n' roll sides from their combined catalogs, from label stalwart Eddie Noack's pseudonymous, half-hearted stab at quasi-rock, Can't Play Hookey, which was 'D's inaugural release in the winter of 1957-58, to classics like Jimmy & Johnny's I Can't
Find The Doorknob, the rocking honky-tonk of Doug Bragg and the bluesy 1959 debut disc of future stars Johnny and Edgar Winter. It includes surprisingly effective stabs at rock 'n' roll by fading western swing bandleader Merl Lindsay, as well as a jumping instrumental track by another veteran country bandleader Hardrock Gunter -- who was also a veteran of trying to adapt to rocking sounds, having previously cut sides for Sam Phillips' pioneering Sun label.
Every CD would be for the most part a 30 song jukebox of the finest Rockabilly ever recorded for all the great labels. We sourced the very best sounding tapes and took them to the best mastering engineers, and then we took the packaging to a new level. We adopted the catchphrase of the first Rockabilly dee-jay, Dewey Phillips, 'That'll Flat Git It!'.

We looked for previously unpublished photos, and tried to find all the artists who'd never been found before.
The result is a truly definitive Rockabilly series