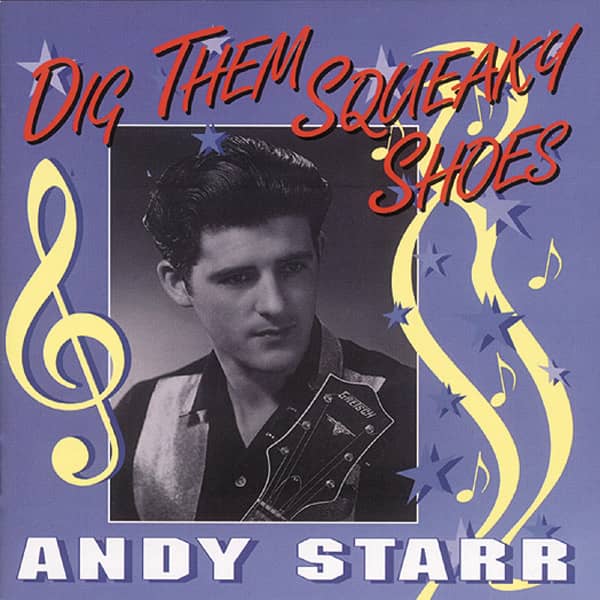 Cleveland Gulledge, named after Grover Cleveland the twenty-second and later re-elected as the twenty-fourth President of the United States, carried on a family tradition and named his son after the popular Franklin Delano Roosevelt, the thirty-second President. Roosevelt was elected for the first of four terms the year the future rockabilly was born. The world was still in the jaws of the Great Depression and the Gulledge family was living in poverty. Frank grew up tough and mean, pulling a gun on a teacher before dropping out of school at the tender age of fourteen. Young Frank would ride the rails and sleep rough, but was saved from this dead-end life by two events. Frank had learned to play music on the 'old family guitar' and the Korean conflict needed young recruits like Frank. So when he was sent to Korea, it was in the Special Services where he formed 'The Arkansas Plowboys' with friend Sonny Barker. (No "...take this rifle kid, gimme that guitar" ...for Frank.)

Joe M. Leonard Jr. was the owner of KGAF radio and Lin records in Gainesville, Texas. His greatest commercial success was with the pop-rock ballad Pledge Of Love by present day TV-evangelist Ken Copeland (Lin 5007), the song eventually being leased to Imperial (5432) where it became a #17 hit on 'Billboard'. Ramona Redd, the composer of the song and Lin artist, was married to Mitchell Torok, who cut a hit cover of the song (#26 on Decca 30230) along with other successful covers by Johnny Janis (#63 on ABC 9800) and Dick Contino (#42 on Mercury 71079). The song proved a valuable copyright for Leonard and his Lin Publishing Company and he would return to the song with Frank Starr who was tipped to be the next Elvis Presley and who he signed to a major label.
Frank Starr was born Franklin Delano Gulledge on October 21, 1932 on a farm near Combs, Arkansas.

His father Grover After his stint in Korea he worked in a factory with his brother Chuck before inducing brother Bob to leave Wichita, Kansas and move to California. There the three brothers formed another 'Arkansas Plowboys' with Frank playing lead guitar. When his brothers proved less serious about a career than himself, he sold his home in California and headed for Texas. After a drunken night in Las Vegas, he woke up married to a woman who had aged noticeably overnight. (She took out her false teeth. Popped out her glass eye. Unscrewed her wooden leg. Frank was long gone!)

"In 1954 I started playin' a mile long stretch of small clapboard beer joints called the Oklahoma Strip. It was just across from the Red River which separates Denison, Texas from Oklahoma. All down the road were these hastily put up shacks that had been turned into clubs to accommodate the personnel from a nearby Air Force base. These places were wild rip roarin' joints
full of female hustlers and lunatics." These clubs were so tough that they would take your weight at the front door, so you wouldn't fight out of your weight classification. Frank had to use the jukebox as a barricade to fend off flying fists and airborn beer bottles. These same jukeboxes used for protection would one day rock to the records of Frank Starr. And for all that, he got to divy up two dollars a night.
After securing his own daily radio show on KDSX in Denison, Texas, the station manager suggested he approach Joe Leonard in nearby Gainesville. Joe was impressed and an early 1955 session produced four songs. Mietzl Miller and Bill Baker were Dallas songwriters, more into Broadway type show songs, when Joe Leonard commissioned some upbeat songs for Frank Starr. The duo presented the nice rural rocker Dig Them Squeaky Shoes and the novelty country rocker The Dirty Bird Song (You Can't Hardly Get Them No More).

The latter song was based on the expression "I'll be a dirty bird" used by guitar playing comedian George Goebel. While Frank had no faith in the song, it opened doors for him and he shared stages with Porter Wagoner and Grandpa Jones. The song was not the expected hit, but an altogether different song based on the same comedic expression by a different artist was released in California. When George Goebel slapped a million dollar lawsuit on all involved, Joe Leonard let Starr's version die.
The remaining two songs became Frank's second release. Oklahoma school teacher W.D. Patty submitted For The Want Of Your Love and while it stalled, he would later contribute to the Andy Starr story as well as writing three sides for Buck Griffin. Tell Me Why is a nice country rocker featuring guitar and piano, the latter by fifteen year old Johnny Pace. Marvin Pace, the bass playing writer of Tell Me Why, was a local Gainesville car salesman who had his own little combo featuring his talented son, and Leonard came to use them on sessions. Mandolin player Paul Buskirk, who Frank remembers as a fascinating musician, played a 5-string tenor guitar on Tell Me Why and pulled out his violin for For The Want Of Your Love. They were billed as The Rock-Away Boys.'

Another session yielded an original country rocker by Frank with his effective muted guitar in Rockin' Reelin' Country Style. Do It Right was a good rocker with excellent lead guitar and was written by the Miller-Baker team, who eventually went on to their first love, writing Where Is My Man for Virginia Thompson, Judy Garland's sister. These songs remained in the vaults until Rockin' Ronnie Weiser rescued them for his raucous Rollin Rock label along with Dig Them Squeaky Shoes in the 1970s.
Frankie Starr, from Fresno, California, recorded on his own Rangeland and Starwin labels as well as on Sims, 4-Star and Decca. Marty Robbins was pushing this Frankie Starr and as the recording industry wasn't big enough for two Frank Starr's, albeit one as Frankie, our boy Frank became Andy Starr and this is the name that became a rockabilly legend. Surprisingly, another Andy Starr (one Andy Zachar) surfaced on Arcade, but kicked up little dust.

Andy had shared the stage with Elvis Presley on a Gainesville date in 1955 and while Starr had his own rockabilly moves, the master helped Starr hone his wild act. Joe Leonard actually lost money on the concert and a guilty Elvis promised on more than one occasion to come back to Gainesville and play a concert for the original S300 fee, even though his asking price was moving skyward. Unfortunately for Joe, he never did take Elvis up on this sweetheart business deal.
It was 1956 and RCA Victor was moving Elvis Presley records by the truckload, using outside pressing plants to meet the demand. Elvis was the talk of the industry and each label was in the hunt for their own version. No stone, rockin' rollin' or otherwise, was left unturned. Joe Leonard hoped to emulate Sam Phillips and place his contender for the Presley crown with a major label. He saw the Aberbach brothers as the path to prosperity.

Hill And Range was owned by the Austrian Aberbach brothers, Julian and Jean. They were part of the deal that brought Elvis Presley to RCA Victor. Joe Leonard, knowing of their part in the Presley rise to fame, approached the Aberbachs with high hopes. Leonard played some Andy Starr tapes and hoped the Aberbachs could weave the same type of magic. He knew other labels wanted their own Elvis Presley and Joe thought Andy "...had everything it took and the Aberbachs thought the same." The problem was that the Aberbachs took Frank to the "wrong label." As an experienced radio man, Joe knew which labels were the best at promoting a new artist. MGM was not that label, but they were so high on Starr. Joe was doubtful and his fears proved well founded as MGM sent out only 200 promo copies of the new release, when he knew Randy Wood at Dot would have sent out 5000 copies. MGM wanted their own Elvis. They just didn't want to pay the price.

Things started off pretty good at MGM in that they released Rockin' Rollin' Stone which is arguably Starr's best record. It had everything to make it a hit - great lyrics and vocals along with Scotty Moore type guitar licks which owed more than a nod to Good Rockin' Tonight. Starr penned the ultimate rockabilly classic with W.D. Patty cleaning up the lyrics on the advice of Joe Leonard, who wanted them dressed up. Whatever the case, a classic was produced. Larry 'Red' Adair delivered the adept guitar workout, while bassist Lyman Macklin and drummer William Pecchi aped the Presley rhythm section. Pecchi had been in the drum chair for an early Buck Griffin session and wrote Ballin' & Squallin' for the great singer as well as recording as Bill...