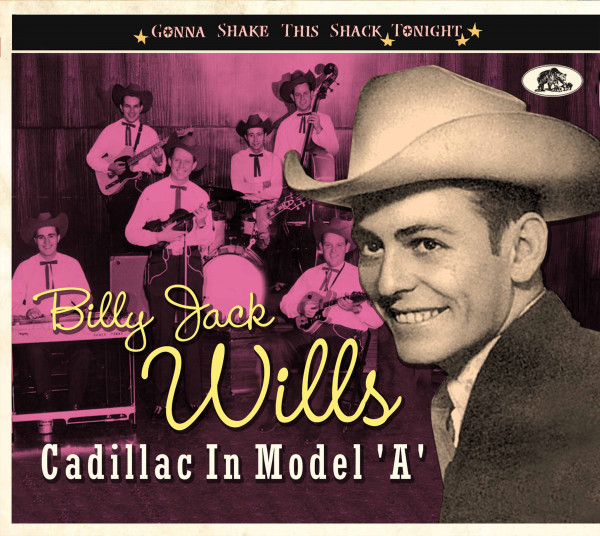 1-CD Digipak, 36-page booklet, 31 tracks, total playing time approx. 75 min.
Here is yet another exciting title in Bear Family Records®' popular series 'Gonna Shake This Shack'.
Billy Jack Wills was the youngest brother of the Wills western swing dynasty. Born February 26, 1926, in Memphis, Hall County, TX, Billy Jack joined the family business as Johnnie Lee Wills' bass player in his late teens. However, mighty Bob Wills ordered him to California to join the Texas Playboys as bass player and drummer. He was also occasionally featured as a vocalist, and he proved his worth by writing the lyrics to Faded Love, Will's massive hit of 1950.
In the late 1940s, Billy Jack Wills took over management of Wills Point, Bob's club in Sacramento. While Bob and the Texas Playboys went on tour again, Billy Jack formed the house band that accompanied him on these recordings. Legendary Playboy Tiny Moore did not want to get back on the road with Bob and became the featured star and co-vocalist in Billy Jack's Western Swing Band.
The band also included trumpeter and bassist Dick McComb, fiddler and bassist Cotton Roberts, rhythm guitarist Kenny Lowery, and later local teen steel guitarist, Vance Terry. Vance idolized the jazzy Hawaiian style of Noel Boggs.
Since Billy Jack was twenty years younger than Bob, his musical influences were more up-to-date. Billy and Tiny had the most progressive band in the early and mid-1950s. Billy Jack also encouraged his members to improvise. Despite the jazzy solos of Terry and McComb, Billy Jack's Western Swing Band had the hardest backbeat in country music. Billy Jack indeed was on the verge of rocking & rolling. The band had a strong following in the Pacific Northwest, and their covers of r & b hits of the day were dance floor magnets.

Bear Family Records® presents Billy Jack Will's Western Swing band at their jazzy rockinest: The CD presents their splendid versions of Good Rockin' Tonight, Crazy Man Crazy, All She Wants to Do Is Rock, alongside (western) swing classics such as Air Mail Special, C-Jam Blues, and the song Wills is genuinely famous for Cadillac in Model' A'. Bear Family Records® presents the MGM version AND the rockin' radio transcript recorded at KFBK Studios, Sacramento, CA. Most of the other songs also stem from the 1952-54 Sacramento sessions held at KFBK. Most western swing bands excelled during radio sessions - the informality brought out the best in the high-class improvisers of that genre. Thus, the tracks surpass any commercial studio recording of the time. Here are 31 selections of Billy Jack Wills and his Western Swing Band – at their swinging finest!