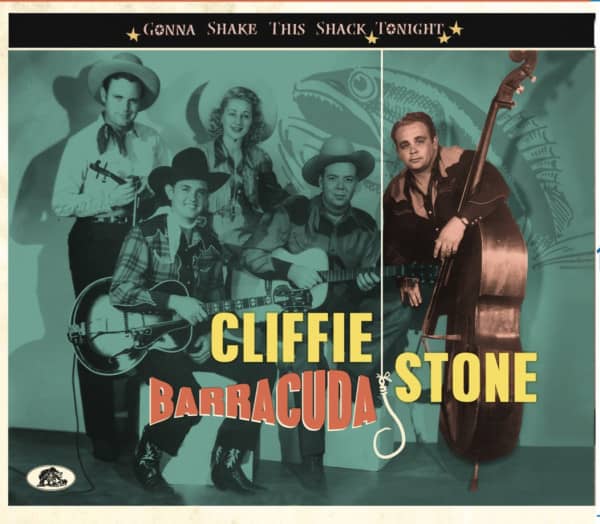 1-CD (Digipak) with 36 page booklet, 31 tracks. Total playing time approx. 78 min.
He was instrumental in the development of country music and rockabilly on the U.S. West Coast in the years after World War II: Cliffie Stone, born in California in 1917, toured as a country musician with his own bands and orchestras and left significant footprints in music history as a high-ranking A&R representative with a keen sense for talented fellow musicians. As host of various radio shows beginning in the early 1940s and later of his own TV show, Hometown Jamboree, which aired until 1960, he furthered the careers of such peers as Lefty Frizzell, Jim Reeves, Tex Ritter, Johnny Cash, Eddy Arnold, Johnny Horton, Ferlin Husky, Merle Travis and many others who performed on the air.
As an A&R man at the young, up-and-coming Capitol Records in Los Angeles, starting in 1947, he discovered Hank Thompson and Tennessee Ernie Ford, among others, whom he also managed until 1957, and recorded a host of great records for Capitol himself!
Stone wrote such hits as Divorce Me C.O.D., So Round, So Firm, So Fully Packed and Silver Stars, Purple Sage and Eyes of Blue, among others, and landed his biggest hit in 1947 with Popcorn, which made it to position No. 14 on the Billboard pop charts.
With our latest album in the successful CD series 'Gonna Shake This Shack' we honor the merits of one of the most important personalities in the history of country music and a rockabilly pioneer. His legacy: great recordings from 1947 to 1955, which we summarize here. In 1989, nine years before his death, he was rightfully inducted into the Country Music Hall of Fame!

On January 16, Cliffie Stone died suddenly of a heart attack at his Saugus, California home. He was 80. Stone, who began in local radio, was to California what Bradley was to Nashville. His work with Capitol Records as talent scout, studio musician, recording artist and producer established the label as the cutting edge of California country.

At Capitol, he worked with everyone from Tex Ritter and Jack Guthrie to Merle Travis, (his songwriting partner), Tex Williams, Tommy Sands, Stan Freberg, Ferlin Husky and the instrumental team of Speedy West and Jimmy Bryant. He founded the 'Dinner Bell Round-Up' radio Show at KXLA in 1946 and in 1949 started the 'Hometown Jamboree' TV show.

He managed Ernie Ford through his peak years of stardom and co-owned the publishing company Central Songs with Capitol producer Ken Nelson. He was inducted into the Country Music Hall of Fame in 1989.

A perfect addition for the 'Gonna Shake This Shack' series!