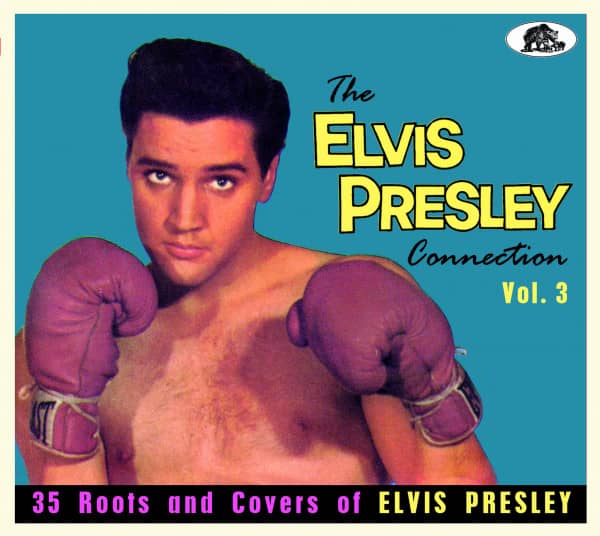 1 CD (Digipak) with 36-page booklet, 35 tracks. Total playing time approx. 79 min.
The third part of our Elvis story
Where did Elvis Presley take his inspirations from? That' s the main question behind the concept for this now third compilation. Elvis' music, his live performances, his Hollywood movies: All of this was unique and influenced generations of musicians. Surprisingly, his influence on the music world of the 1960s hardly diminished, despite the Beatles and Rolling Stones. At the same time, Elvis Presley himself was influenced by other musicians, as this compilation shows! The third edition is dedicated to his creative period from 1962 to 1966, cover versions and originals in chronological order, as Elvis recorded them at the time.
Rarities, demos, film songs
Some of the often rare recordings appear for the first time on CD! We found rare versions of Elvis songs by Rikki Henderson, Les Carle or Wayne Harris on British and American low budget labels. Famous colleagues from R&B (The Coasters, The Clovers, LaVern Baker and Clyde McPhatter), Country Music (Marty Robbins, The Browns) and Rock 'n' Roll (Jerry Lee Lewis, Terry Stafford, The Chavis Brothers and the Elvis-like vocal wonder Ral Donner) are also featured. In addition to rare cover versions by the likes of Skip Arne and The Dukes, a number of rare demos are included that were recorded exclusively for Elvis at the time and are accordingly revealing. Some of them were written explicitly for the soundtracks of his films and recorded by Don Robertson, Mort Shuman or Otis Blackwell, a.o.
The CD includes a 36-page full color booklet with many rare pictures and illustrations, as well as an accompanying essay for each song, written by German Elvis Presley expert Helmut Radermacher.