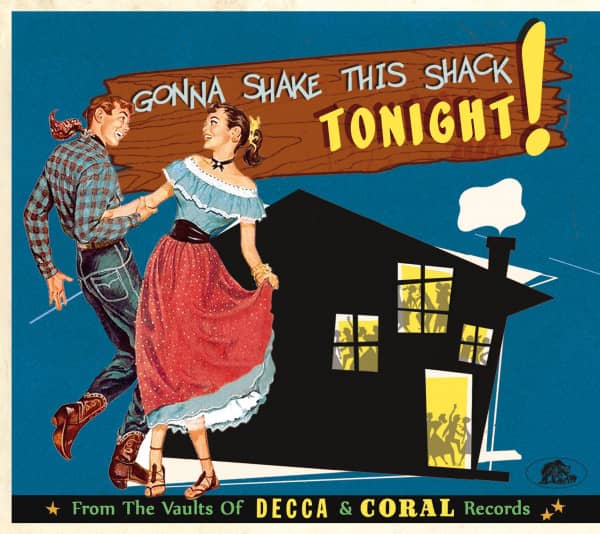 Various Artists: Gonna Shake This Shack - From The Vaults Of Decca And Coral Records Vol.1 (CD)

​1-CD with 32 page booklet, 30 tracks. Total playing time approx. 76 minutes.
• Great Country Boogie from Decca Records!
• A successful up-tempo mixture of honky-tonk and country music from top stars like Hank Penny, Hank Garland, Grady Martin, Jimmie Davis and other fantastic, but largely unknown fellow musicians.
• The CD features some very successful cover versions of 'Sixty Minute Man', 'Hot Rod Rag', 'Juke Joint Johnny' and 'Bloodshot Eyes' and of course several originals.
• The liner notes in the extensive and illustrated booklet are written by hillbilly expert Roland Heinrich.
'Series' are playing an important role in the extensive catalogue of Bear Family Records, which has grown over decades. Our Rockabilly series 'That'll Flat Git It!', or 'Rocks!' with the most important stars of Rock 'n' Roll and Rhythm & Blues are among our successful classics. 'Gonna Shake This Shack Tonight!' is dedicated to the often neglected or even unloved country boogie artists. The assertion that country musicians didn't have a blast before Elvis is simply wrong! Already in the '40s musicians made the walls of country dance halls shake! That's Country Boogie!
Our latest release in this series focuses on recordings from the US Decca label.
The latest installment in Bear Family's groundbreaking 'Gonna Shake This Shack Tonight!' series features the hillbilly and boogie roots of Rockabilly and Rock 'n' Roll, this time with jewels from Decca and Coral labels. Included are big names like Jimmie Davis ('Cherokee Boogie'), but also artists who remained almost unknown like Jim Atkins('I'm A Ding Dong Daddy From Dumas') and Rusty Keefer with his original version of 'I'm Here To Get My Baby Out Of Jail'. With their own version, The Everly Brothers made it to position #76 in the Billboard charts in 1962! Other hillbilly rockers on this compilation include Tabby West, Hard Rock Gunter, Wayne Raney, Tommy Sosebee, Chuck Murphy, Terry Fell, Kenny Roberts and Arlie Duff.
With this Decca edition we continue one of our most successful series!