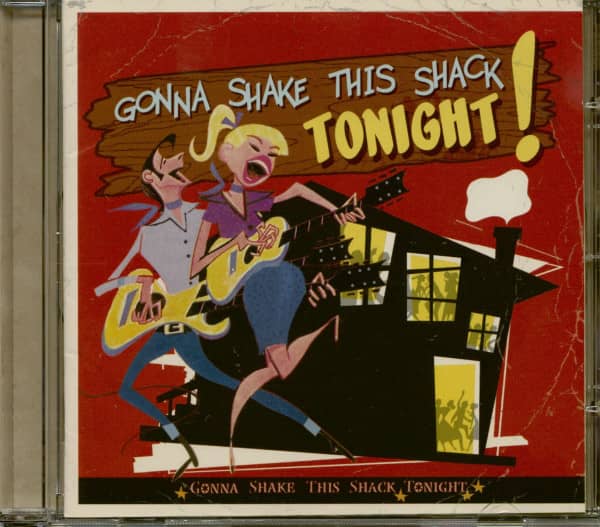 1-CD Jewelbox with 48-page booklet, 30 tracks, playing 68:05 minutes.
The latest installment of Bear Family's incredible, ongoing series 'Gonna Shake This Shack Tonight!' devoted to the hillbilly boogie roots of rockabilly and rock 'n' roll draws on treasures from the RCA label. It includes big names like Eddy Arnold getting hep to the jive on Hep Cat Baby, all the way to guys who were barely household names in their own households, like Lee Bell, who chimes in with Beatin' Out The Boogie (On The Mississippi Mud). Along the way, we meet the Davis Sisters, Charline Arthur (who worked early tours with Elvis), Martha Carson (a version of her song Satisfied…, a song Elvis recorded at Sun, but didn't release), Hawkshaw Hawkins, Johnnie & Jack, Terry Fell, Melvin Endsley, Hank Penny, Johnnie Lee Wills, and several others.
The tempo never lets up. There are some R&B covers (including a version of Hound Dog that predates Elvis by three years, Burn That Candle, Ko Ko Mo) in addition to many originals. If you're under the misapprehension that rockabilly came out of the clear blue sky in 1955 and that Elvis was the first to shake things up at RCA, then listen to this volume.
Let's shake the shack and rattle the outhouse!