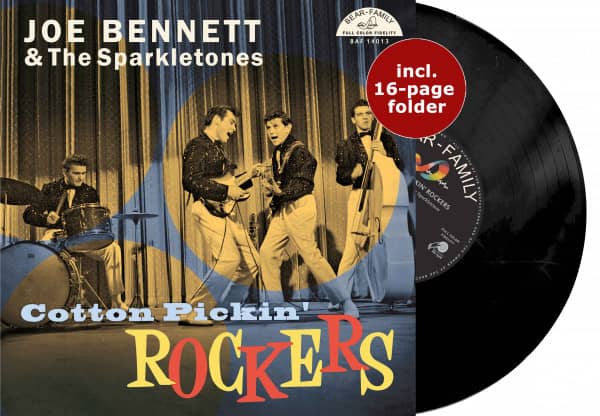 1-LP 10inch vinyl, 14 tracks. Total playing time approx. 28 min.
They started rocking young during the ‘50s down in Spartanburg, South Carolina. None of the four members in Joe Bennett and The Sparkletones were past their mid-teens (Bennett’s diminutive vocal partner and rhythm guitarist Howard ‘Sparky’ Childress was all of 14) when they roared up the hit parade in 1957 with their blistering rocker Black Slacks. That youthful vigor defined everything the band cut for the ABC-Paramount and Paris labels.
Bear Family Records®’ new 10-inch album collects the young band’s hottest rockers, including their signature smash as well as its flip Boppin’ Rock Boogie; a sizzling encore pairing Penny Loafers And Bobby Socks and Rocket; the follow-ups Cotton Pickin’ Rocker, Little Turtle, and We’ve Had It, and three ABC gems that didn’t see light of day at the time. Bennett, whose sparkling lead guitar was a primary ingredient in his band’s sound, and his crew moved over to Jack Gold’s New York-based Paris logo in 1959; that’s where their Bayou Rock and What The Heck emerged. The ’65 ABC one-off Well Dressed Man proved the reunited Sparkletones had no problem keeping up with the times. Pull on your Black Slacks and get ready to rock with Joe Bennett and The Sparkletones!