Boppin' In The Dark 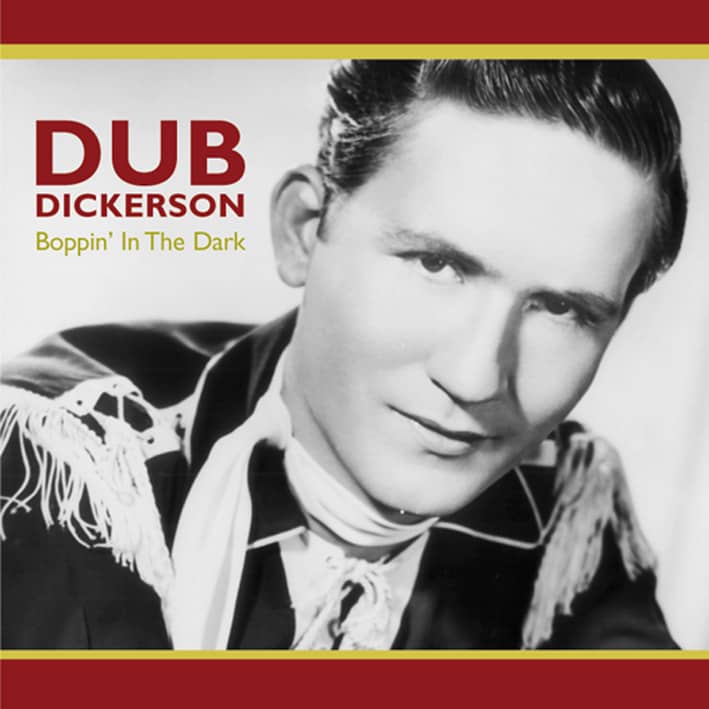 He was born Willis Dickerson, the youngest son in a family of ten, in Grand Saline, Van Zandt County, in northeast Texas, on September 10, 1927, though later Capitol publicity shaved two years off his age. Raised on a family farm, his first love was cowboy music and the early influence of Gene Autry is palatable in his singing throughout his career. He soon took up guitar and, according to his bio in a 1954 Capitol 'Country & Hillbilly' artists catalog, hit the road at fourteen:

"By singing and playing his guitar and taking a wide variety of jobs to pay expenses, he traveled through most of the United States and Mexico," the brief bio claimed. "Some of the jobs were really odd...He once sat on top of a flagpole for 28 days as a substitute for 'Shipwreck Kelly'...This inspired him to name his guitar 'Sky-Hi'."

How much traveling Dickerson actually did is unclear, but he seems to have formed his first band not far from Grand Saline in larger Tyler in the late '40s. At some point, he made a logical career move and headed west to Dallas, where early in 1950 he made his first recordings, two western (and somewhat western swing) flavored novelties waxed for Imperial at Jim Beck's studio, then fast becoming one of the key country studios in the nation -- a position solidified and magnified considerably a few months later when Lefty Frizzell cut If You've Got The Money I've Got The Time there.

Beck had been honing his engineering skills since the early postwar years, and by this time he'd learned to get amazing things out of equipment that was far from amazing. Astute, at times ruthless, he also knew how to make money off the steady stream of aspiring young singers who were already coming to his Ross Avenue studio in droves. He'd already placed masters with independents like Bullet and Royalty, and issued a couple of dozen sides on his own Dude label, but the relationship he formed in 1949 with Lew Chudd president of the rising independent Imperial, was an important step toward connecting him with even bigger concerns.

Although West Coast-based, Chudd had drawn his hillbilly catalog chiefly from the Southwest from his 8000 country series' inception in 1947. The first Imperial sides cut at Beck's were probably by Dewey Groom, including the minor hit Butane Blues, soon covered by both local deejay Johnny Hicks on Columbia and former Dallasite Gene O'Quin on Capitol. Groom's session was followed by sessions by Homer Clemons, the singing bassist who'd earned some notoriety in 1947 with his bawdy Operation Blues, and Johnny Rector, who'd worked with Bill Boyd, recorded with Bob Manning on Dude, and worked around this time with Hank Thompson in the right-hand role soon taken on by Billy Gray.

Groom, Clemons and Rector cut four songs at their sessions -- the industry and musician's union standard -- but Dickerson seems to have cut only two, both originals: Owl Hoot Blues and Ain't Got No Doggone Gal. He was backed by the western trio the Frontiersmen, led by accordionist Highpockets Busse and including steel guitarist Eddie Martin and bassist Don Poole. Busse had worked several stints in Dallas, from the 1930s onward, but the Frontiersmen were a West Coast group that grew out of Red Murrell's Ozark Ramblers. Led at times by fiddler Andy Halcom, the larger group seems to have split apart in 1949 and Busse, Martin and Poole headed to Texas, where they appeared on the Big D Jamboree, did club work and made quite a few sessions at Beck's before heading back to the California and reforming under Hal Southern.

Always a more rough and tumble group than models like the Sons Of The Pioneers or the Riders Of The Purple Sage, Busse's trio had little trouble fitting in amid the tougher, more honky-tonk slanted sounds that usually emanated form Beck's. They were essentially western swing in outlook, something Beck would soon begin to shy away from (from a commercial recording standpoint, for all intents and purposes, it was dead in the water by the early '50s). In addition to this date with Dickerson, they also cut sides under their own name and with Paul Blunt and Ray Price (the latter's debut) for Bullet, and apparently backed Kentucky fiddler Cliff Gross, a prewar star of the Lightcrust Doughboys, on a pair of songs issued a few years later on the Dixiana label.

Filter
No results were found for the filter!
Dub Dickerson: Boppin' In The Dark Art-Nr.: BCD16372