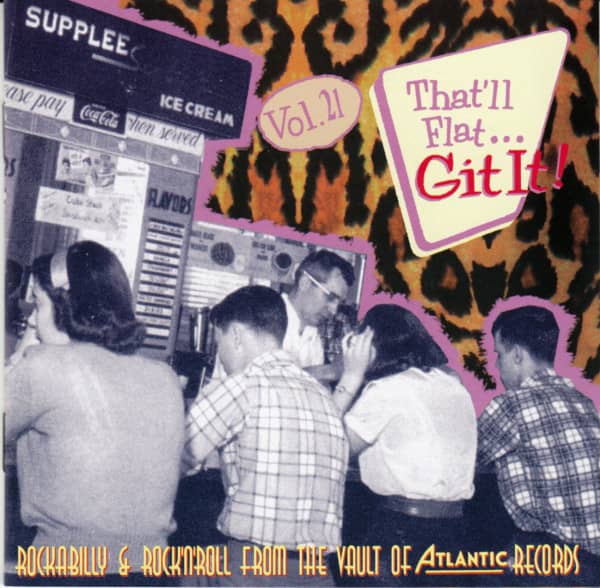 Various - That'll Flat Git It!: Vol.21 - Rockabilly From The Vaults Of Atlantic (CD)

Rockabilly from the vaults of Atlantic Records!

Entertainment mogul David Geffen recalled an early conversation in which he asked Ahmet Ertegun, the co-founder of Atlantic Records, how to make money in the music business. Ertegun said he would demonstrate, and he got up from his chair, hunched over, and shuffled slowly across the room. Geffen didn't understand, so Ertegun did it twice more. Finally he explained: "If you're lucky, you bump into a genius, and a genius will make you rich." Ertegun co-founded Atlantic Records, bumped into some geniuses, made money, and died much as he probably hoped he would. He fell backstage at a Rolling Stones concert on October 29, 2006, and passed away on December 14, aged 83.
Ertegun's exotic background was unusual for a record industry pioneer. "When I was two years old,"  he told 'Slate' magazine, "my father, who was Kemal Ataturk's legal adviser [Ataturk, for those in the dark on near-East history, was the founder of post-Ottoman Turkey], was sent to Switzerland to represent Turkey at the League of Nations. He was also the Turkish ambassador to Switzerland. After that he was the Turkish ambassador to France.
So I spent several years of my youth in Paris and then he went to London and was ambassador to the Court of St. James during George V's reign. Then we went to Washington when he was appointed ambassador to the U.S. When I was about 8 or 9 years old, in 1932, [my brother] Nesuhi took me to hear Cab Calloway and later Duke Ellington at the Palladium in London. I had never really seen black people except I had seen pictures of great artists like Josephine Baker.
And I had never heard anything as glorious as those beautiful musicians, wearing great white tails playing these incredibly gleaming horns with drums and rhythm sections unlike anything you ever heard on records. So I became a jazz fan quite early and never went off the path thereafter. In 1936, it was decreed that every Turkish citizen was to choose a surname. Prior to that people had simply been known as 'Son of James,' or whatever. My father, Munir, chose the surname Ertegun which means 'living in a hopeful future.'"
Munir Ertegun died in 1944, and was buried in Washington. At the end of the Second World War, his wife and daughter accompanied his remains back to Turkey, but Ahmet and Nesuhi stayed. At graduate school, Ahmet discovered Max Silverman's Quality Radio Repair Shop, a local store that had just branched into records. Around the same time, Ahmet befriended Herb Abramson, a dental student who handled A&R for National Records. Abramson was something of a hero in Ertegun's eyes, and he wanted to go into business with him.
They talked Silverman into backing them, but he pulled out. Ertegun then turned to the family dentist, Dr. Vahdi Sabit, who put up $10,000 by remortgaging his house. They founded the company in September 1947 in New York, and it was incorporated the following month. Abramson was president; Ertegun was vice-president, and Abramson's wife, Miriam, was vice-president and office manager. Atlantic started just a few months before the 1948 recording ban went into effect, so the first year was a tough one. They recorded right up to the deadline, bought some old recordings and some foreign recordings, and did a few bootleg sessions through the ban. The early records were predominantly jazz.
Atlantic made its first venture into hillbilly music in 1949-'50, releasing seven 78s in its Folk & Western Series and another on its first subsidiary label, Plaza. The prevailing sound was accordion-driven east coast country music, a style that had fallen from favor nationwide.
The entire venture would be completely forgotten by all but obsessives if not for the fact that one of the releases was by Bill Haley (and you can hear it on Bear Family's exhaustive early Haley set, 'Rock 'n' Roll Arrives').
Every CD would be for the most part a 30 song jukebox of the finest Rockabilly ever recorded for all the great labels. We sourced the very best sounding tapes and took them to the best mastering engineers, and then we took the packaging to a new level. We adopted the catchphrase of the first Rockabilly dee-jay, Dewey Phillips, 'That'll Flat Git It!'.

We looked for previously unpublished photos, and tried to find all the artists who'd never been found before.
The result is a truly definitive Rockabilly series that now runs to twenty-seven volumes. 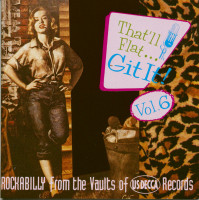