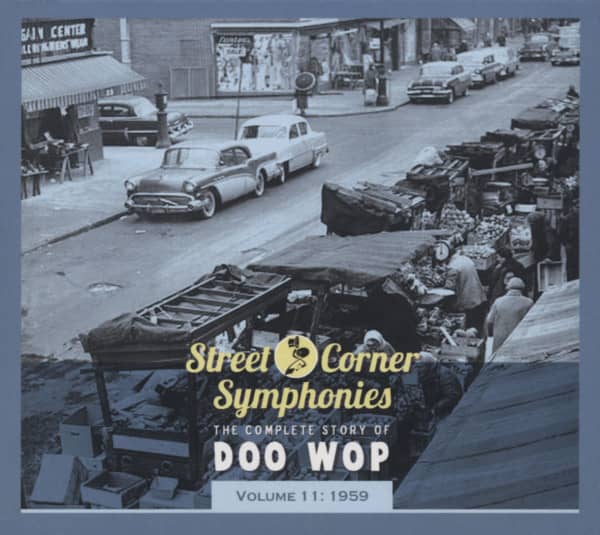 Cutting edge R&B vocal groups were beginning to move away from the tried-and-true doo-wop approach in 1959. A new lineup of Drifters was bravely pioneering what would come to be known as uptown soul, a sub-genre developed in New York by imaginative producers Jerry Leiber and Mike Stoller incorporating Latin rhythms and majestic string sections that were a long way removed from time-honored street corner doo-wop with minimal instrumentation. Soon this impeccably crafted, extremely pop-accessible new sound would spread like wildfire.

Then there was the holy roller approach of The Isley Brothers, whose pew-rattling screams and torrid sanctified chord progression on their two-part rouser Shout brought the soul-saving intensity of the Baptist church full force into the R&B lexicon. Countless aggregations would follow one lead or the other (in some cases, both), modernizing the vocal group sound just as The Ravens and Orioles had at the start of the postwar era and The Clovers, Midnighters, and Clyde McPhatter's Drifters did when the rock and roll movement was first spreading.

There was still plenty of newly recorded doo-wop to savor, and it was more of a multi-ethnic experience than ever. New York sired a phalanx of Caucasian vocal groups (Dion and The Belmonts, The Mystics, The Passions, The Fireflies) whose harmonies were as precise and bracing as their African-American counterparts. There were plenty of R&B-trained newcomers too, although many would make a mere handful of platters before disappearing into the mist (The Sonics, Fantastics, Boss-Tones, Accents, Desires, and Little Jimmy & The Tops here, for example).

A lot of familiar faces were still thriving. The Clovers enjoyed their biggest seller for several years by adopting a Coasters-oriented approach. The Flamingos nailed their top-selling hit of all. Add The Dells, Coasters, Olympics, Fiestas, and plenty more to that experienced list. Berry Gordy was just getting his Motown empire off the ground; Smokey Robinson's Miracles were already making delicate ballads that were fluffier than a soufflé, and The Satintones showed promise as well.

Doo-wop would undergo a major revival as the decade turned. The seeds for that revival were already being sown in 1959 - as a listen to this disc readily attests.