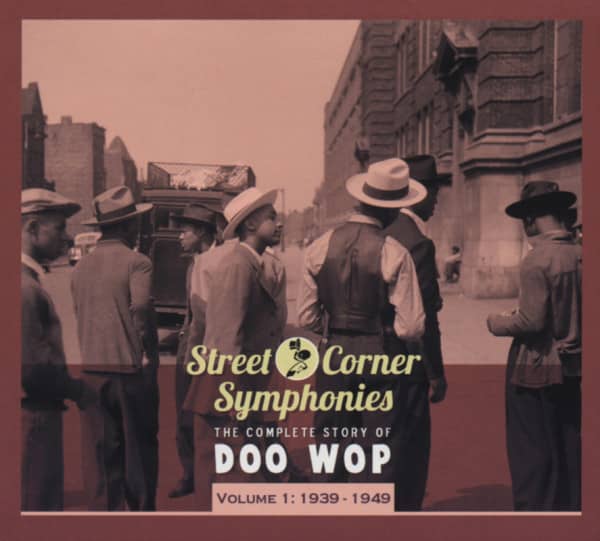 The roots of the 1950s rhythm and blues vocal group explosion were buried deep in a previous generation of African-American harmonizers that paved the way for what's now termed doo-wop. The Ink Spots, Mills Brothers, and Golden Gate Quartet were three of the most influential pre-war black groups, their network radio broadcasts embraced by countless listeners nationwide; their pop-slanted recordings sold very well too. By the mid-1940s, they had plenty of competition on both coasts and across the U.S. This vocal group movement was overwhelmingly urban in scope; quartets in the hinterlands tended to stick to gospel pursuits.

Many groups of the pre-war generation started out singing spirituals, eventually crossing over to the secular side to broaden their commercial potential and gain more radio and record exposure. A few—The Southern Sons/Melody Masters, The Trumpeteers/Four Rockets--recorded both sacred and secular material under different names, apparently recognizing no conflict between the two worlds. The Golden Gate Quartet's pioneering efforts embraced both genres at the same time without any name changes at all (they were prime motivators in the rhythmically syncopated 'jubilee' style of gospel singing).

With few exceptions, pop song publishers didn't save their best new material for black groups, meaning the groups either had to reinvent older repertoire, or write their own songs. The Cats and The Fiddle, The Big Three Trio, and The Four Aces were self-contained units, playing their own instruments behind carefully honed vocal harmonies. If a group only sang, an accompanying pianist or guitarist was a must.

The post-war emergence of The Ravens and The Orioles signaled the next step in the idiom's development. Their revolutionary platters were aimed at a younger generation; Orioles lead tenor Sonny Til was the genre's first matinee idol, appealing to teenaged African-American girls in a way that The Ink Spots' Bill Kenny and various Mills siblings never did. Though hipper whites were no doubt aware of them, The Ravens and Orioles made limited concessions to the pop world; they weren't radio stars and relied on record sales to fuel their popularity. Their mammoth impact inspired hundreds of promising young groups to gather under the nearest corner street lamp and harmonize on their latest hit songs.

This collection provides a primer on the most important groups and recordings of the 1940s. Without these pioneers, it's hard to imagine The Dominoes and Clovers shaking up the R&B scene so forcefully at the dawn of the 1950s. The die had already been cast.

Times 13.06.2012 These are extraordinarily fine records, and this series is top-rate archeology.

Now Dig This 7/12 Bear Family, the best reissue label in the world, has followed up its year-by-year survey of R & B, "Blowing The Fuse", with a similar annual overview of vocal harmony groups, called "Street Corner Symphonies". Congratulations, Bear Family!

These are extraordinarily fine records, and this series is top-rate archeology.
Times 13.06.2012