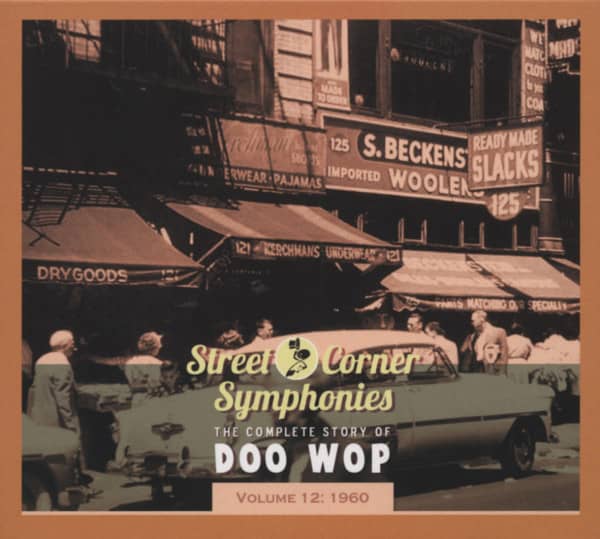 The vocal group sound was splitting in several directions as the new decade turned. The New York area was as obsessed with doo-wop as ever, groups of all ethnic stripes joyfully making street corner harmonies in studios across the city. The Chaperones, Chimes, Desires, and Starlites were making their presence felt for the first time alongside more established outfits such as The Jesters, Fiestas, and Danleers. There was plenty of doo-wop action on the West Coast too, with The Sevilles, Paradons, Vibrations, and Rochell and The Candles all surfacing. With the popularity of the recently released album 'The Paragons Meet The Jesters,' two West Coast groups took similar names, The Paradons and The Pentagons.

Violins were everywhere on 1960 vocal group platters, in large part due to the phenomenal success of the newly recast Drifters. Their producers, Jerry Leiber and Mike Stoller, started a trend with their percussion-laden Latin rhythms, a sophisticated approach centered in New York that became known as uptown soul (even The Coasters were dabbling in suave south-of-the-border fare). The Shirelles became The Drifters' female uptown soul counterparts, similarly awash in strings, and The Crests, Flamingos, Blue Notes, Skyliners, Cadillacs, Dubs, Five Satins, and more were soon willingly surrounded by moonlighting symphony musicians (after all, it imparted a touch of class to the product).

Experienced outfits such as The Moonglows, Clovers, "5" Royales, Falcons, and Spaniels were still making fine records (Hank Ballard and The Midnighters were as hot as any group on the scene). Detroit was really breaking out as a vocal group hot spot; not only were veteran outfits such as The Five Dollars enduring, the young and hungry Distants and Miracles were setting the stage for the Motor City’s '60s emergence as the soul capitol of the U.S. The Four Tops wouldn't settle in at Hitsville, U.S.A. for another three years or so, but they were already making product in New York for producer John Hammond, who also happened to be working with another Detroit standout, Aretha Franklin.

An increasing gospel influence enriched a lot of the year's vocal group output as the advent of soul music swayed more and more aggregations. Then there were vocal group songs that were virtually unclassifiable - witness one of the year's biggest hits, Maurice Williams & The Zodiacs' impossibly infectious Stay. So much was going on all at once that identifying one overriding trend was impossible. Maybe that’s one reason this 'Street Corner Symphonies' series is so fascinating!