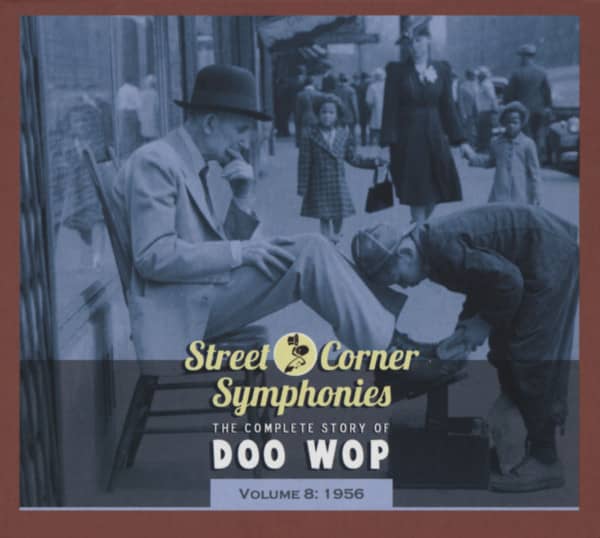 If this collection sounds like it rocks a little harder than its predecessors in this series, it's no misconception. The first flowering of rock and roll was in full bloom during 1956, and R&B vocal groups followed the trend, their waxings enriched by scorching sax solos and storming tempos.

There were plenty of familiar names riding the airwaves. The Drifters had survived the loss of Clyde McPhatter quite nicely, sharing the upper reaches of the R&B hit parade with their labelmates The Clovers as well as other proven hitmakers such as The Spaniels, Moonglows, and Platters. But the great majority of groups populating this disc are first-timers, testifying to the continuous turnover in popular aggregations during the early days of rock and roll. The Ravens and Orioles were still cutting platters, but precious few teenagers cared.

The Coasters were making their first hits under the savvy eye of producer/writers Jerry Leiber and Mike Stoller. So were several Chicago groups, notably The Dells, Magnificents, and Flamingos. L.A. was represented by The Cadets (actually a ringer; they'd scored the previous year as The Jacks) and Jaguars. But as always, New York churned out more new groups per square mile than any other city. The Channels, Willows, Heartbeats, Bop-Chords, Pretenders, Cookies, and plenty more made classic platters in 1956, joining recently crowned stars Frankie Lymon and The Teenagers on the highly competitive Gotham scene. The Teenagers were extremely influential, thanks to Lymon's 'kiddie lead' sound. Frankie's little brother Lewis started his own Teenchords, and Jimmy Castor's Juniors plowed much the same ground - and they were only the tip of the iceberg.

Of all the seminal group recordings released in '56, perhaps the most enduring wasn't done in a studio at all. The Five Satins' immortal ballad In The Still Of The Nite was taped in a chilly church basement in New Haven, Connecticut, its sonic limitations more than offset by the timeless yearning in Fred Parris' lead vocal. James Brown and The Famous Flames offered vivid insight into the future of the vocal group genre with their intense debut single, the gut-wrenching Please, Please, Please. Like The '5' Royales and Ray Charles before him and countless acts to follow, Brown presaged the rise of soul, his Famous Flames' rough-hewn harmonies more in line with Southern gospel quartets than the polished doo-woppers on the East Coast.