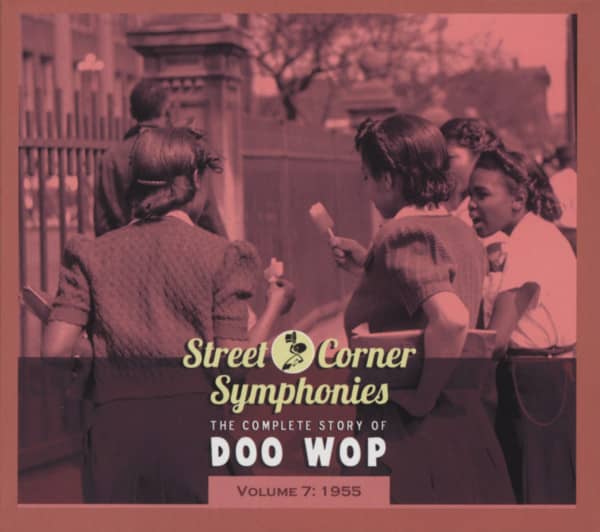 More R&B vocal groups than ever populated the musical landscape in 1955, the majority of them aiming their sound directly at the rock and roll demographic that was expanding every day. Those new groups were getting younger too. Frankie Lymon, the pubescent lead tenor of The Teenagers, was all of 13 when their debut single Why Do Fools Fall In Love took the country by storm late in the year. It spawned an avalanche of 'kiddie lead' imitators, particularly in New York and on the East Coast, where devoted fans simply couldn't get enough of the new sound.

A lot of heavy hitters continued to thrive in '55. The Moonglows, Clovers, Five Keys, Midnighters, Robins, Charms, Spiders, and Cardinals were still going strong. The Drifters were in flux, thanks to Clyde McPhatter receiving his draft notice, but that didn't stop them from posting one smash after another as the lead torch passed from Clyde to Johnny Moore. A slew of newcomers found their way onto the R&B hit parade, even as weak white covers often deep-sixed the superior originals from crossover contention. The Cadillacs, El Dorados (autos were now rivaling birds as group names), Nutmegs, Colts, Hearts, Turbans, Diablos, Four Fellows, Jacks, and Marigolds climbed the charts for the first time, the sort of wholesale youth movement that was unheard of in years past.

Biggest of all were The Platters. They weren't recording neophytes; they'd cut a series of R&B singles for Cincinnati-based Federal Records that few people had noticed. But since their manager Buck Ram got the Los Angeles quintet signed to the major Mercury label and steered them in more of a pop direction, The Platters had polished their sound to a bright sheen. Tony Williams' stratospheric lead tenor possessed a universal accessibility that would render them the top-selling black vocal group of their era.

More than ever, the instrumental backing was as exciting as the groups themselves. Once upon a time, The Ink Spots and The Mills Brothers operated with the sparsest of accompaniments. Now sizzling sax solos by session aces Sam 'The Man' Taylor, Jimmy Wright, Red Holloway, and Lee Allen jacked up excitement levels to the boiling point. This was cutting edge music for teens and the young at heart; the socking backbeats that drove it reflected that. Vocal groups were a hotter commodity than ever on the R&B and rock and roll circuits.