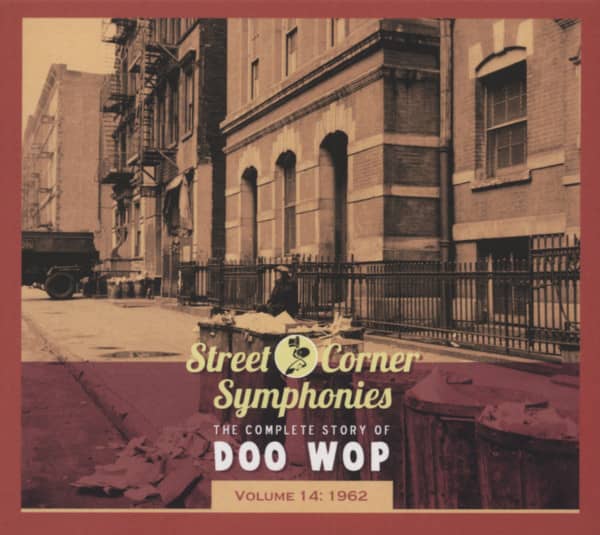 America's longterm love affair with doo-wop was beginning to fade a bit as the advent of soul altered the terrain, yet there was still plenty of the classic sound throughout the Northeast. No matter the trend, vocal harmonies never went stale.

Not too surprisingly, most of the groups scoring major doo-wop-rooted hits in 1962 either hailed from New York City (The Earls, The Jive Five, The Excellents, The Belmonts, The Cookies), neighboring New Jersey (The 4 Seasons, The Duprees, Ronnie and The Hi-Lites), or Philadelphia (The Dovells, The Orlons, The Majors). Uptown soul was still a factor thanks to the ever-reliable Drifters, and newcomers such as The Exciters, while the gospel-rooted soul harmonies of The Valentinos and The Falcons brought a new level of intensity to the field. Skin color was no longer much of a factor; the sound was now universal among the teenage demographic.

What was stunning was how many vocal group hits were emanating from Detroit as Motown began to really hit its full stride. The already established Miracles and Marvelettes were now joined on the charts by The Temptations and The Supremes - the two groups that would lead Berry Gordy's empire to mainstream glory - as well as Martha & The Vandellas and the acrobatic Contours. Even more surprising was how many other outfits were emerging from Detroit on labels unaffiliated with Motown: The Volumes, The Donays, Nathaniel Mayer & The Fabulous Twilights, the return of Nolan Strong and his Diablos. The most obvious difference: none of those acts possessed much in the way of staying power (but what platters they made during their too-brief turns in the spotlight).

Chicago and Los Angeles were impressively represented on the group rolls, and there was a smattering of Southern input as well thanks to The Del-Rios and The Tams. But the majority of the genre's innovators hailed from the East Coast, where urban street corners still resonated with lovely four- and five-part harmonic blends. And while they may not have been gathering under street lamps to strut their stuff, female groups were more plentiful and scoring more major hits than ever. The Shirelles were still riding high, and their disciples were everywhere.

Cd damaged during last track. Will keep it. Should it have affected more tracks I should return it.
These series like the Blowin The Fuse, Sweet Soul Music, C& W Hitparade and Electric Blues are the best in the world! The musical content, sound and packaging are absolutely top!
I still have to complete the C&W Hitparade, but my financial situation causes that this order will be placed further in the future.

I look forward to the Rock & Roll series and whatever will be released in this compilation project.