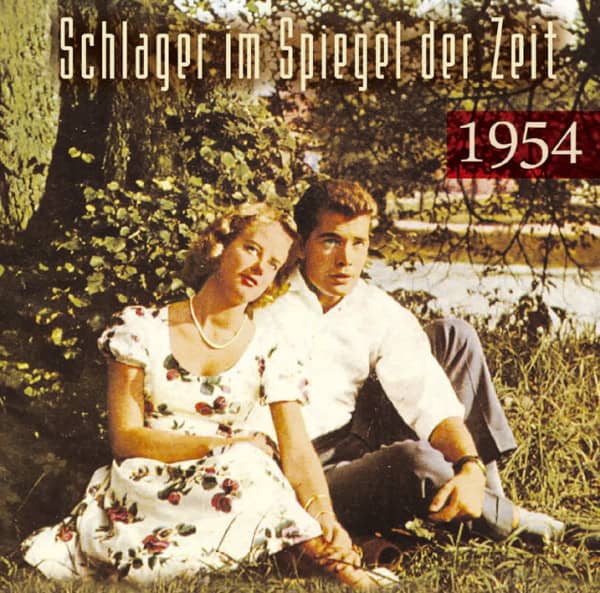 The year 1954
So neither 'Bravo' nor Camillo was very objective. Their lists therefore played no role in the compilation of our CDs 'Schlager im Spiegel der Zeit'. When they took the floor, the 'vending machine market' had long been ahead of the game when it came to hits. After all, data has been collected in Braunschweig since the end of 1953 - from today's point of view irreplaceable documents about the situation of the Wirtschaftswunderland. From the overall and country lists we have selected the titles that have placed best and reflect the music world of the 50s best. In 1954 she was actually still intact.

At Christmas '53 the German families stocked up on the new electrical appliances that were now being manufactured in the country: Washing machines, mixers, radios, music chests and also record players with up to four speeds and needles, which were set to 'N' (normal) for shellac records and 'M' (micro) for vinyl records. And everyone who had already achieved something bought a scooter, a motorcycle with sidecar or even a car. The economic engine was humming. The first organised trips with Scharnow went to the North Sea, the Baltic Sea and the Alpine countries. The state again paid child benefit for large families. According to the law, the father had the last word on how the money was spent. And not just about it: Children were allowed to play with tin soldiers or margarine figures, but were not allowed to buy coke, let alone comics like 'Akim, the son of the jungle', which was actually listed in 1954.

The family itself became the focus of attention in the media. The radio series 'Familie Hesselbach' came to the cinema, with the series 'Familie Schölermann' television competed with the big screen. Among the most successful films of the year - 'Emil and the Detectives', '08/15', 'Ich denke oft an Piroschka', 'Sauerbruch - das war mein Leben' and 'Meines Vater Pferde' - even an American production appeared with Fred Zinnemann's 'Verdammt in alle Ewigkeit'. In those years they regularly went to one of the numerous cinemas, but the focus of the family was the tube radio with which they received radio plays - VHF was a rarity, and West German radio stations had only just begun to experiment with stereo in 1954. For the Schlager world this didn't matter, because we didn't have stereo records until July 1958. With titles like Gib mir den Wodka, Anuschka oder der Beschwipsten Drahtkommode you wouldn't have really noticed the difference.

The record companies have already done everything possible to promote their products. Only a short time after the introduction of the new single format, Teldec released advertising records like 'Die erste Volltreffer 1954', which were distributed to the trade. This resulted in the series 'Klingende Post', with which the Hamburgers from now on regularly presented their repertoire in short excerpts. Compared to previous years, the public has now been overwhelmed with new releases. In the 4th quarter alone more than 1000 new records came onto the market: 67 % entertainment, 6.5 % jazz, 26.5 % serious music. With 54% the 78s were still in the majority, equal to 23% the 33s and 23% the 45s. In total, the industry again produced 25 million records.

If you listen to early 'Ringing Post' editions and their predecessors, however, the prejudices about the 50s are quickly confirmed. In the record companies still sat the old gentlemen, who took marches like old comrades (Polydor) into the program with enthusiasm or offered the 'True Sound effect of Telefunken for marches' (Teldec). The repertoire examples were introduced with jagged music, "Achtung!" shouts in the Kasernenhofton and cannon thunder ('Volltreffer!'). The female customers were enmeshed with clichés of "charming novelties" selected with "love and care", for example: A song sung by my mother.

The fact that the taste of the public who served the jukeboxes moved away from this is shown by the lists of the 'vending machine market', in which only a few of the recordings preferred by the record companies made it. Even the wishes expressed by the exhibitors diverged more and more. On the one hand 'pre-war hits on 45s' were demanded and on the other hand successes were reported 'only with foreign titles'. Even Bill Haley's Crazy Man, Crazy, appeared on a Bavarian list. Teldec did not even take the piece on its advertising plates, but recommended various polkas to the record buyers. From their suggestions for 1954 came the Heideröslein, The old forester's house, We have a piano, Schuster stay with your last and the vodka fox in the jukeboxes to front places.

Strangely enough, the Braunschweiger Branchenblatt lacks any reference to a record of the Austroton label: The Viennese soubrette and cabaret artist Cissy Kraner had recorded the Aber der Nowak written by her husband Hugo Wiener in 1954 and thus became the sensation on 'men's evenings'. Even if it should be hushed up, the chanson kept its popularity until the 60s - even with the judiciary.