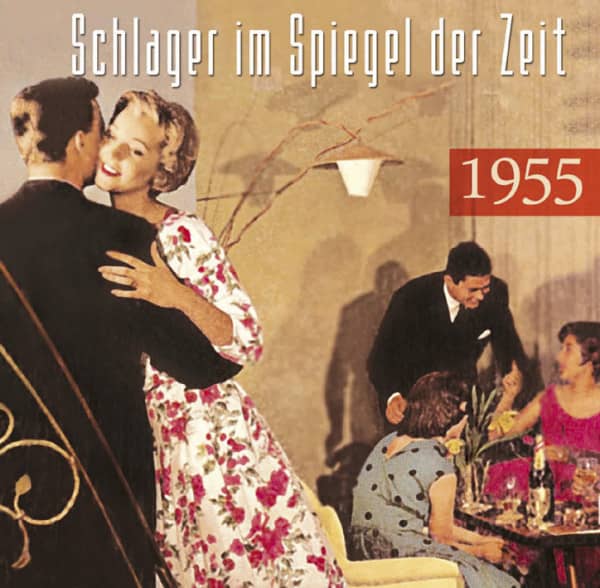 Ten years after the war, not all German soldiers were released from Soviet prison camps. That is why 79-year-old Chancellor Konrad Adenauer travelled to Moscow to agree diplomatic relations with the Kremlin and thus bring back the last Germans from Siberia. Strangely enough, in the same year there were no problems with rebuilding their own army in the Federal Republic. The Federal Republic was now sovereign, the period of occupation officially ended. The admission of West Germany into NATO went hand in hand with this. Militarism was still deep in the people's bones anyway. This can be seen very clearly in a debate which the 'vending machine market' conducted on the subject of Badenweiler.

The record industry, which still evaded the question of whether the NSDAP anthem Horst-Wessel-Lied could be re-released "because of demand from abroad", had no qualms about re-releasing the Badenweiler, Hitler's favourite march, on record. Of course, the march also appeared in jukeboxes, which was not an enthusiastic response from restaurant visitors who remembered the system of injustice and terror. The industry magazine "Automaten-Branchenblatt" had the advantage of being able to interview an expert on the spot. The Braunschweig attorney general Dr. Fritz Bauer left no doubt in his statement: "If a citizen feels harassed by playing this or a similar song and files a complaint, the matter will be prosecuted... and charged." As similar songs he counted the Horst-Wessel-Lied, Bomben auf Engeland, Siegreich wollen wir Frankreich schlagen und Volk ans Gewehr auf. His expertise was further supported by a Lower Saxony decree prohibiting songs and musical works that "evoke memories of the National Socialist tyranny or violate the idea of international understanding". Bauer, who was imprisoned in a concentration camp during the Nazi era, was, however, a laudable exception in post-war justice. It was also thanks to him that the Auschwitz trials were later held in Frankfurt.

Old versus new
The Badenweiler Marsch remained in the jukeboxes only a temporary episode, like the marching music as a whole. The parody Pack den Badenweiler already reached a wider audience. The pushers of the jukeboxes were mainly used by representatives of the younger generation who wanted to hear more modern music. The vending machine operators were now increasingly in favour of making their already good business even more lucrative by increasing the price from 10 to 20 pfennigs per title. There were innovations again this year at all levels of society. An essential one announced itself in the cinemas of the republic. With 'Die Saat der Gewalt' a completely new combination of youth film and youth music came to our country in autumn. Bill Haley's use of Rock Around The Clock in the film attracted audiences as much as the actors Vic Morrow and Sidney Poitier. James Dean, younger than the two colleagues, had more the makings of a new youth idol, even though 'Beyond Eden' did not yet arouse as much emotion as '...because they don't know what they are doing'. Actor Matthias Fuchs, with Heidi Brühl in the film 'Die Mädels vom Immenhof' (the film music can be seen on the Bear Family BCD 16644: Für immer - Immenhof), had the appeal of a model student compared to Dean. There was still calm before the light wind that would move society in the coming years.

Deutsche Lufthansa opened the scheduled service with a flight from Hamburg to Munich and let the fantasies of travel to the wide world sprout up. The recently published book 'Ich radle um die Welt' about Heinz Helfgen's sensational endeavour to pedal solo through foreign countries by bicycle was a source of inspiration. What it looked like and what happened beyond the borders could be seen by those staying at home in the cinema in the 'Wochenschau'. There was also something remarkable happening on the domestic stove: Those who were on their own prepared a toast Hawaii for guests instead of knuckle of pork - according to the new recipe of the TV chef Clemens Wilmenrod. The name of the dish naturally had something to do with the wanderlust of the post-war Germans, which had already manifested itself in the Hawaii songs, but came quite simply from the pineapple ring, which was baked with ham and cheese on a toast. In advertising, the mother proudly served her family with such creations, while the father took care of his newly acquired BMW-Isetta or Borgward-Isabella. The first Goggomobil had left the assembly line on 19 January 1955. The much acclaimed design of a new VW, which the Osnabrück-based company Karmann produced in series under the name 'Ghia' from 1955 onwards, came from an Italian body shop. 76 percent of households now had a radio. Bold young people asked like a girl in a Graetz advertisement: "Does Daddy let you talk to him?" when it came to a radio for the children's room. The radio manufacturer's sales argument: "Your child can also experience the world at home with their own radio." And in their own home they celebrated 'house balls', danced the Mambo, which also set the tone on the Polydor's advertising panels. The record players were practically produced by the mother companies of the record labels - in 1955 alone, the industry sold one million of them, and at the same time threw 30 million records onto the market.

Feltz felt
Kurt Feltz (14 April 1910 - 2 August 1982) had also developed an industrial standard for his Schlager songs. The text author, producer and publisher celebrated such great successes that according to 'Spiegel' Electrola allegedly moved its company headquarters from Berlin to its residence in Cologne because of him. Surely this is only a legend, but it shows the importance Feltz was given. The news magazine dedicated a cover story to him in 1955 when he signed an exclusive contract with Polydor - a profitable business for both of them. On a bestseller list of the label 17 of the 20 titles came from the 'Ton-Waren Fließband' of Kurt Feltz. With his self-written film 'Bonjour, Kathrin! he just started to usurp the music film. The basis for his extraordinary career had been his guest appearance at the end of the 1940s as director of music entertainment at the NWDR. There he installed what later became famous as Feltz felt: There was hardly a show without his hits. Only a dogged confrontation with the 'Hör Zu' editor-in-chief Eduard Rhein, whose Künneke libretto 'Traumland' Feltz did not want to record, ended the spook. Rifleman's help was given to Rhein by Feltz competitor Ralph Maria Siegel. From then on, Feltz ("the most deserving GEMA member", 'Der Spiegel') withdrew from broadcasting and let his guarantors in the stations work for him.

Even though Kurt Feltz described his own creations (often based on successful foreign compositions) as "songs for ironing", one must attest to his great craftsmanship and imagination. His hits mostly moved on a level superior to that of his competitors. It is no coincidence that his name (including pseudonyms) appears six times in connection with titles on this CD. The advertising record 'Starparade' (episode 1, 1955) of the Polydor ("Please, my name is Polydor!"), spoken with a teasing female voice. May I now, for your pleasure and entertainment, turn to the latest recordings?") introduces his current production Eventually ("This is my - sorry! - your Caterina Valente!") between loud Mambos, Hawaiian sounds and yodels. Zither and French horn were not mothballed for a long time, and the old shepherd still moved unhindered through the country, just as the dairymaid of St. Kathrein guarded her flock on the alp.

top seller in America
In 1955, Polydor could not yet decide what the taste of the future would be. Bill Haley, now in Brunswick's program in the same house, was not yet relevant enough for the advertising department to record on PR records. The 'vending machine market' had long since moved on. He now regularly served subscribers the '50 top hits of America' and indicated "at the request of many operators" which US hits were "available from German production". Like Haley's Mambo Rock and his Rock Around The Clock. With this record Bill Haley even made it to the top of the Lower Saxony list in December 1955! A further effect of the creeping Americanization of the local music world: German titles from the USA were increasingly spreading in the jukeboxes. Their original origin remained hidden from most people. Even if they had read Shuman or Porter next to the name Siegel or Feltz as authors. Who would've known that back then?