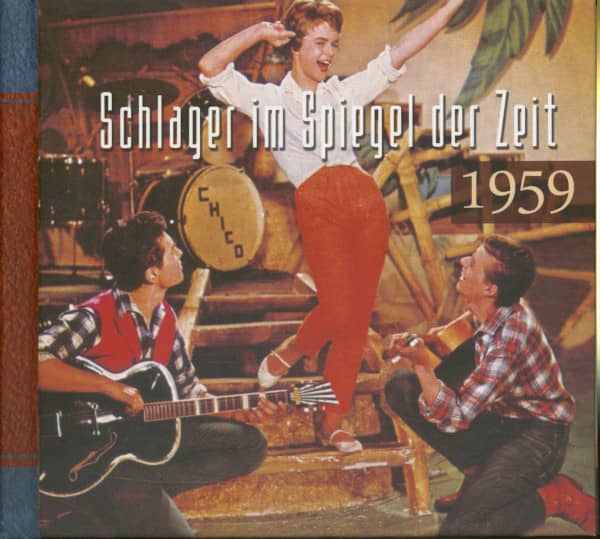 Every Friday since the middle of the 50s a bowling club met in Hamburg. This was nothing special and would not have led to an article in the magazine 'Leg auf' if the participants had not been the cream of the pop producers and authors in the north. It made sense for the club members to call themselves 'Schnulzentreu', and what moved them was summed up in the 1959 issue, which was distributed in radio and record stores: "Schlagermacher sind - mit Ausnahmen - Auftragsschreiber. Rock sobs, heath kitsch, wanderlust sighs, semi-political wistful songs, love-, beer- and schunkelschnulzen - the audience is regarded as the client. If a new 'scam' arrives today, a hundred hit specialists will follow tomorrow." With their creations they conjured up a healthy and carefree world. And they agreed that the target group wanted to have it 'nice' (Oh, that would be nice). So that they didn't get into each other's enclosures, the 'Schnulzengetreuen' coordinated while bowling. Among them: Werner Cyprys, Ralf Arnie, Lotar Olias, Ernst Bader, Franz Josef Breuer, Bert Kaempfert, Karl Golgowsky, Peter Mösser and others. In the Ivo Robic hit Morgen, Peter Mösser also formulated the lines that everyone could tune into when looking back on the decade: "Was it a beautiful, beautiful time!

To speak of a pop cartel would go too far with the Kegelbrüdern. But Kurt Feltz (April 14, 1910 - August 2, 1982) had long since raised it elsewhere. The attacks of the 'Hör Zu' editor-in-chief Eduard Rhein had not remained without effect. In February 1959, Rhein had put the WDR under so much pressure that it determined the quota of Feltz titles on the station and appointed an expert commission to investigate the corruption of the Schlager maker. Among the four honorable gentlemen who were to investigate the Feltz deals were top-class people such as Dr. Karl Korn, co-editor of the Frankfurter Allgemeine Zeitung, and Dr. Otto Benecke, executive board member of the Max Planck Society in Göttingen. The air became thinner and thinner for the Cologne-based Schlagermacher. That's why he wanted GEMA to be his friend, who, like him, also wrote pop songs and maintained radio connections. They found a simple trick that had already worked in the USA: the productions were released under pseudonyms. And to make sure no one suspected anything, one of the participants played the Feltz title on the Hessischer Rundfunk radio station, for example, and the latter had the hits of his Hessian colleague put into the WDR programme for this purpose. One dirty hand washed the other, and one happily continued to earn.

The CID can't find anything.
But as early as 1959, such conduct mobilized the judiciary. Whoever reported Feltz took the accusation seriously: unfair competition and bribery. One day the office and company rooms of the Schlager manufacturer were searched. However, the investigators met an experienced opponent. Kurt Feltz felt so sure that he mocked the prosecutor in his next hit. In the crime tango, the refrain says: "But the police can't find anything!" For the normal Schlager fan it was one line like any other, for the prosecutor a nuisance and for Feltz a small triumph. It wasn't until 1963 that his empire was thoroughly examined by 'Der Spiegel' ('The cartel of the Schlagermacher'), and he and his cartel brothers were publicly pilloried. But there he had his villa in Switzerland for a long time and no longer needed any art shops.

For a long time now, the felt shops have not been limited to radio broadcasts only. What the 'Hör Zu', who had made the Feltz case public, particularly angered, were, apart from the 'Filmkarussell', television programmes such as 'Hart auf hart' and 'Potpourri der guten Laune', in which the Rhineland cheerful Feltz had let off steam. Television became more and more important for the Federal Republic of Germany. In Bonn the decision for a second programme had been made. While in December 1958 there were 1 million registered apparatuses, this number tripled during 1959. The favourite programmes of the time were 'Tonend Peter Frankenfeld' and 'Ein Platz für Tiere' with the Frankfurt zoo director Bernhard Grzimek. The 'Perry Como Show' purchased from America, however, did not reach the majority and was placed in the afternoon program.

America also supplied the cinemas with Hollywood ready-made goods. An ageing Gary Cooper was presented to the German audience as the star of the films 'Der Galgenbaum', 'Der Mann aus dem Westen' and 'Sie kamen nach Cordura'. It was not possible to build a new youth idol in the film world after James Dean. And also Marilyn Monroe, in Billy Wilders' 'Some like it hot' at her artistic peak, was not suitable for it. In Germany, on the other hand, films for the younger generation with young actors had established themselves. Bernhard Wicki's war drama 'Die Brücke' (The Bridge) captivated the audience with actors such as Volker Lechtenbrink and Cordula Trantow. Gerhard Schröder (CDU), Federal Minister of the Interior from 1953 to 1961, was not enthusiastic about it: "German film does not have to deal with such political topics, he decided officially. Other movies already had their youth message clearly in the title like 'Why are they against us?', 'Crimes after school and '... and cheeky too'. In the latter, everything revolved around a jazz cellar that was to be founded by a youth group. Even in the jukeboxes, it was now easier to market jazz. The record companies, who had initially recorded this music on LPs and EPs, started to release jazz on singles as well. "Chris Barber in every jukebox," was the headline of the Star Revue. A USA import demonstrated a newly gained quality awareness: Even before the film came to the cinemas here, the record company Philips had already distributed George and Ira Gershwin's 'Porgy And Bess' on stereo records in Germany. And the German magazine 'twen', whose founding in 1959 already heralded a new decade, devoted itself entirely to jazz in its early days.

The dove returns
The most popular orchestra of American origin, which broke all records in our country at the time, only had a distant jazz influence. Orchestra leader Billy Vaughn had already received a golden record for German sales for his Sail Along Silvery Moon. Now he followed up with La Paloma and with his 'twin saxophone sound' (new independent saxophone sound 'with silvery thirds') started an unexpected renaissance of this ancient piece. Instrumental hits were on the advance: With La Paloma, Patricia and Sail Along Silvery Moon three were in the top group of the '10 of the month' of 'Leg auf'. The instrumental La Paloma was immediately copied by German orchestras, and the dove also appeared on record with vocals. The decisive boost came from a music film that had nothing other to do with the revived popularity of the title: three theatre troupes are simultaneously trying to bring a story about La Paloma to the stage as a musical. In addition, of course, there was the usual love story - not very credibly embodied by Bibi Johns and Karlheinz Böhm.

But the true content were the hits of the time that producer Gerhard Mendelson had put together. Contributor and 'rock newcomer' Ted Herold on these 'little movies' that were now flooding the cinemas: "You took a handful of pop stars and built a plot around them!" The stars in this case: Bibi Johns, Jean Thomé, Ted Herold, Bill Ramsey, Ralf Paulsen, Louis Armstrong, Gabriele, Dany Mann and the Kessler twins. The dancing, acting and singing sisters were in demand in Germany. Her lightly-shielded performances did not harm her clean image. In the same year they entered the Grand Prix with the title Tonend woll'n wir tanzen gehen gehen (Tonight we want to dance, go'n), but ended up on the European stage in eighth place (out of eleven).

The 'Schnulzengetreuen' and Heinz Woezel, Ralph Maria Siegel, Kurt Feltz, Gerhard Mendelson - two dozen 'Kulturschaffende' had the music business firmly in their hands in the 1950s. They had made up the Schlager and conquered air sovereignty over the taste of time. Even the American pop invasion didn't change that. They lamented this publicly in the German media, but secretly used it simply for their own purposes. In the American 'Billboard' the German music experts Dr. Hans Gerig, Ralph Maria Siegel and Paul C. R. Arends revealed their recipe for success: "As soon as a record turns out to be a hit in the USA, the title is acquired by a German publisher, translated, handed over to a record company for production and thrown onto the market". However, they merely copied the practices of the USA music market, where cover versions, copied titles of successful originals, were now part of daily business. No wonder that at the end of the 50's there was a swarm of German cover versions of American titles. And what originated from original German production was often given an English name to make it look modern. The audience of the 'Star Revue', 90 percent of whom decided in favour of German in response to the question "What do you prefer?

Peter contra Ted
For modern music, young performers such as Conny Froboess and Heidi Brühl or Peter Kraus and Ted Herold were used. Around the last two a controversy developed in the audience, which is in no way inferior to the later argument between Beatles fans and Rolling Stones fans. The role of the Beatles in this case was played by Peter Kraus.