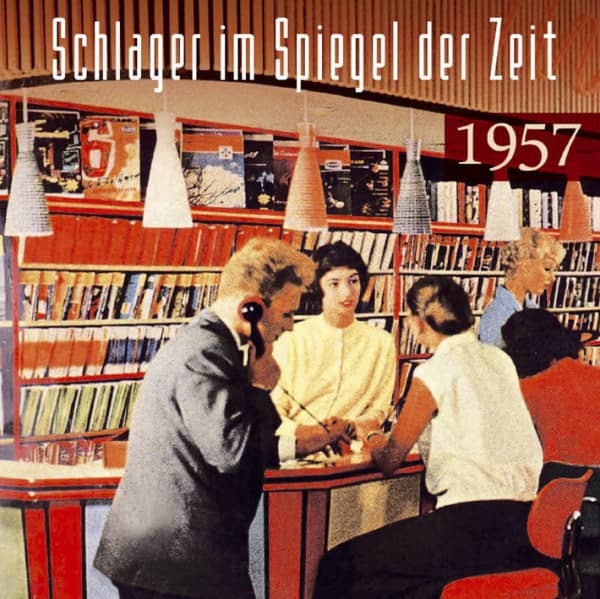 It all looked wonderful in 1957. The Saarland was annexed to the federal territory, the economic engine hummed, full employment prevailed. In order to keep the labour market in full swing, 'guest workers' were even recruited. After two government phases under Konrad Adenauer, the 'Bundesdorf Bonn' was fully accepted as the capital and was no longer regarded as a provisional solution. For the first time the 81-year-old 'Alte aus Rhöndorf' managed to win an absolute majority for the CDU with his 'No Experiments' election campaign in autumn. Election advertising: "We have got something out of life again since Ludwig Erhard is Economics Minister in the Adenauer government. The goal he has set himself is: 'Prosperity for all!' The pay packet, the shopping net confirm it..." In the shopping net there were plenty of imported goods like Campari and Ketchup, Cinzano and Coca Cola. The man with the thick cigar who was associated with this luxury became a campaign hit. How secure one felt in the government was demonstrated by the Defence Minister Franz Josef Strauß, when he demanded three nuclear weapons for the Bundeswehr.

The American troops in Germany no longer had to request them, they were already equipped with the warheads. It is a little noticed aspect of the economic miracle years that in our country protests were articulated against it. In the 'Göttingen Declaration' 18 nuclear scientists announced that the Federal Republic should voluntarily renounce the possession of nuclear weapons in order to secure world peace. Already at the beginning of the 50's a 'without me' movement against rearmament had formed. The campaign 'Battle for Nuclear Death' has now become more popular. During the election campaign, the SPD posted 'No compulsory military service'. However, this did not have a noticeable effect on recruitment for the Bundeswehr: Of 93,292 conscripts, only 358 declared themselves conscientious objectors.

Youthfulness as a programme
Interestingly, in the same year Horst Buchholz demonstrated in the Thomas Mann film 'Die Bekenntnisse des Hochstaplers Felix Krull' how to avoid military service. And an impostor in uniform reaped storms of enthusiasm in the cinema: Helmut Käutner's 'The Captain of Köpenick' was showered with prizes at the Berlin Film Festival. In his East Berlin DEFA film adaptation of Heinrich Mann's 'Der Untertan' (The Subject), which has now been shown in the West, Wolfgang Staudte also dealt critically with the German being. The film market was divided into several segments just like the Schlager world. Especially for the young people, 'Die Frühreifen' with Heidi Brühl and Peter Kraus came to the cinema. But those who were under 20 did not want to grow up as quickly as possible despite their early maturity. With the casual clothes, with the modern hairstyle one set own accents. The term teenager, which suddenly appeared, made clear that youthfulness had become program. The designers in the industry were prepared for the trends: Opel presented for the first time tail fins and lush chrome on a car with the new captain. With the new streamlined Mignon turntable from Philips, also known as the 'record eater', the modern counterpart to the old-fashioned music chest was in hand at parties. 56 million records were sold by the trade, 75 percent of which were light music. In the country the gap between the traditional and the modern deepened - in music it was called: between "Höllerö-dö-dudel-dö" and "A-wop-bop-a-loo-bop". During the dancing lessons one learned waltzes, tango, rumba and mambo as well as new steps: Blues and boogie.

Those who grew up in the Nazi era associated it with 'Negro music'. How beautiful, however, were the pair skating pirouettes of the dream couple Marika Kilius and Hans-Jürgen-Bäumler, which were performed with Strauß waltzes. The two of them could be admired at figure skating competitions on television, as well as the 'Blaue Bock' with Bembel and Bumsmusik. On Saturday afternoons, the families gathered in front of the now one million screens to watch Hesse drinking applewoer. New by German standards: The television show 'Bonsoir, Kathrin', in which Caterina Valente sang, danced, played and moderated. The older generation sat at the weekend in the cinema at the 'Zürcher Verlobung' of Helmut Käutner in front of the big screen: Lilo Pulver and Paul Hubschmid gave the lovers, for whom The Three Peheiros sang Yes, yes, love in Switzerland. For the Grand Prix, Margot Hielscher came into the preselection with telephone, telephone and took fourth place. The Schlageretablissement was attuned like the federal politics to restoration. This corresponded to the general mood in the country. The editors of Burda-Moden could also poem with impunity: "A spring day makes Marianne's heart wide and happy and gives her the right mood to perform her enchantingly elegant Complet, the Schlager model for the month of May.

The world view of the year '57 could have remained so balanced had it not been for sudden events that questioned the previous harmony. One week after Adenauer's election victory, the German sailing training ship Pamir sank in a hurricane in the Atlantic, on the way from Buenos Aires to Hamburg, near the Azores. Of the 86 German sailors, only six were rescued. And in November, the public was shocked by the news that Rosemarie Nitribitt, a prostitute, was found murdered in Frankfurt. The slumbering wonderland was shaken by a hitherto suppressed ugly reality. And the entire West lost its self-confidence when the Soviet Union launched Sputnik, its first satellite into space.

'Half-strikes and their half-tender girlfriends'
The Rock 'n' Roll rocket from Memphis contributed no less to the uncertainty: Elvis Presley conquered the jukeboxes with Don't Be Cruel, Hound Dog, All Shook Up, Just Because and Teddy Bear. The Teldec classified him in an ad ('10 thick fish') still cautiously behind Vico Torriani and his A real Italiano. And only a few of them immediately entered with cover versions like 1956 Ralf Bendix and Werner Overheidt (Heartbreak Hotel) or 1957 the Rock And Rollers (Hound Dog). Pat Boone, now among the first 10 of the 'vending machine market' with his pleasing intonation of Tutti Frutti, polarized less there. And Harry Belafonte even made it to number 1 in this hit list in September, when several of them jumped on board to participate in the success with German versions of Island In The Sun and Banana Boat. The dam was now broken, the German takeovers of American hits could no longer be stopped.

Besides AFN and BFN, the English presenter Chris Howland, who gave the audience musical tutoring in his WDR programmes 'Musik aus Studio B' and even came to the jukeboxes with the German voice-over text for the Japanese Farewell Song ('Die Klingende Post Nr. 8': "They all know him as the well known record jockey from radio!"), spread American and English music alongside AFN and BFN. In German radios Belafontes Banana Boat sailed right on top of the radio waves. The Calypso was enthusiastically received in the media. Film und Frau' heard how "lovers sing their feelings to each other in calypso rhythm". And he observed that "the half strong and their half tender girlfriends got off their motorcycles for a while and listened to this new and more cultivated folklore". The record companies sensed the big business and dedicated the front pages of their information brochures to the trend. Philips brought a colored illustration in the style of the 'Hörzu' drawings with the line 'Original Calypso. Dance of the season 1957/58', and Capitol printed a photo of Lord Flea on the first page: 'Original Calypso from Trinidad'. Also the 'vending machine market' praised the fact that with the Calypso "the music seems calmer than the hot whipping rock 'n' roll rhythms" and recommended to the jukebox stands Caterina Valentes Tipitiptipso from the workshop of Kurt Feltz.

The music tycoon from the Rhine now faced competition from the south. Already in the 40's the Berlin Gerhard 'Mosche' had hired Mendelson (1913 - 14 March 1976) in Vienna at the record company Austrophon. In shellac times he practiced there as a producer of artists such as Hans Moser, Johannes Heesters and Anton Karas. The recordings of his discovery Peter Alexander found their way to Germany on the labels Austroton and Elite Special. With this success behind him, he founded his production south for the Polydor and poached in Feltz' territory. But his biggest coup was to build up Peter Kraus, a young pop star in Germany, who was able to swim along on the rock 'n' roll wave. In return, Peter Alexander really got his breakthrough with Kurt Feltz.

Under the counter
Already in 1954 a completely different caliber had crossed the border from Austria, but had been hushed up for a long time. Only in autumn '57 did 'Film und Frau' report in the category 'Schöne Musik - gut aufgelegt' about a blonde from Vienna - the Austrian chansonette Cissy Kraner. "For weeks her record was sold out regularly, but now you can ask for it again... Why don't you do it sometime, as long as you're not afraid of strong tobacco? The chanson 'But Nowak won't let me rot' appeared under the gold-green Austroton label." In most shops, the plate was stored under the counter. She belonged in the dusty corner, which in the 50's one would like to keep quiet about just as much as the profession of Rosemarie Nitribitt. When the Schwabing singer Gisela released the same song on record, her record company provided the cardboard sleeves in one corner with a reinforced hole at the edge, through which one could pull the bracket of a lock. So children's ears should be protected from the plate. A rogue who suspects a sales trick behind it! Cissy Kraner's 1954 recording was only allowed from the end of 1960 with the imprint "Achtung! Sale to young people forbidden according to the decision of the "Bundesprüfstelle 798 vom 16. Okt. 1960" to be handed over to the trade. Dieter Bröer, editor-in-chief of the magazine 'Leg auf', who listed the title in his sheet, was promptly reported by a Catholic pastor - because of "the deliberate dissemination of writings harmful to young people". The proceeding has been terminated.

The Nowak never appeared in the hit lists of the 'vending machine market', even though it is hard to imagine that the record was not recorded in the carousels of the jukeboxes. The editors of the Braunschweig industry magazine now boasted of the reliability of their best lists: After all, the NDR presenter Hans Hellhoff, who also spoke the texts of the 'Klingenden Post' in 1957, took over the editors' lists in his programme 'Der Musikautomat', which were based on "a genuine, objective recording of the audience's judgement". Further confirmation for the editorial staff: The women's magazine 'Brigitte' also printed the hit parade of the 'vending machine market'. Comment of the Braunschweiger: "This success, which is a recognition of objectivity, is at the same time recognition for the operators who have been loyal to us for years with their help. They deserve our thanks when today large audiences associate the term 'jukebox' with the 'objective hit parade'." In 1957, 12,000 pits were the basis, which stood between Flensburg and Passau in the restaurants.