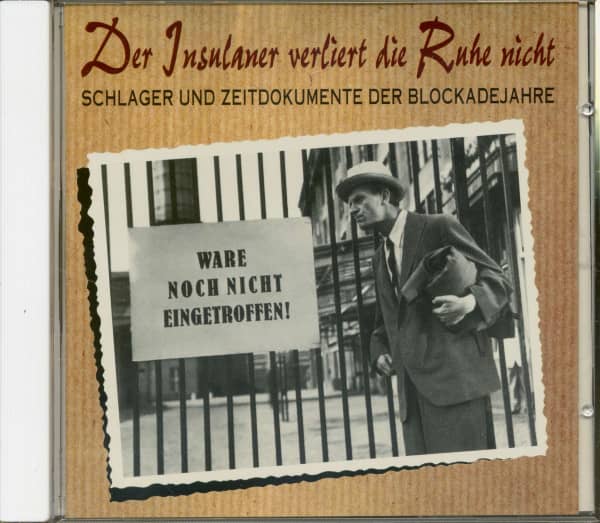 1-CD with 16-page booklet, 22 single titles. Running time 74:23 minutes.
70 YEARS END OF THE BERLIN BLOCKADE 1949-2019! We honor the brave pilots of the ''raisin bombers!''
The success of the airlift set up by the Allies forced the Soviet Union on 12 May 1949 to end the blockade of access routes to the West Sectors of Berlin!
Contemporary documents and original Schlager 1947-50. 16-page booklet (German) with many b/w pictures.
The hits of the blockade years 1948/49 clearly belong to a transitional period. The old melodic melodies from the 1930s and 1940s were still the great role models. Foxtrot, Slow and Rumba were the predominant rhythms, love and wanderlust were the themes of the lyricists. But there has been something new. The cheeky, more or less up-to-date songs that Bully Buhlan sang or those performed by the Three Travellers. Swing and boogie took part quickly within the German Schlager. On this CD you can hear the most important of the then popular records!
On Bear Family Records' second CD about the Berlin blockade years, 'The Mess Is Here' (BCD16298), you can hear the great imports from America, which brought the new sound, and artists, who also became our stars. The island man does not lose his calm... was the constant refrain of the current political radio cabaret presented by RIAS Berlin, the radio station in the American sector, under the direction of Günter Neumann. This series, which was broadcast for the first time in the middle of the blockade period, on September 3, 1948, has established itself in the twenty years of its existence not only in the memory of Berliners, but also in the history of cabaret and the chronicle of world historical events connected with the city of Berlin. We also present the Insulaner song here in a very special version, sung by Ethel Reschke, which makes a direct reference to the airlift machines roaring day and night over Berlin.
GOETZ KRONBURGER
One of the two and a half million West Berliners who chose Freedom -