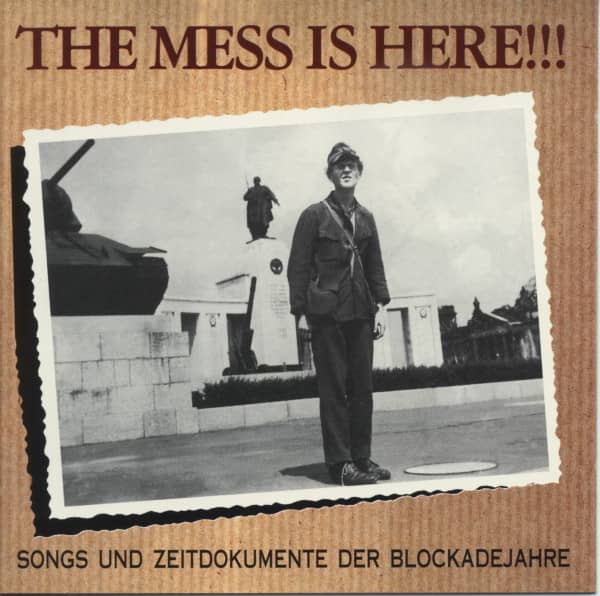 Various - History: The Mess Is Here - Songs and contemporary documents of the Berlin blockade years (CD)

STATIONS OF THE BERLIN BLOCKADE:
January 24, 1948
Railway train with Western Allied soldiers is detained in the Soviet occupation zone for eleven hours.
30 March 1948
Soviet Military Administration (SMAD) announces tighter controls on connections to and from Berlin.
2 April 1948
Establishment of a'small airlift' to supply the American garrison in Berlin.
June 15, 1948.
Closure of the motorway Berlin-Helmstedt at the Elbe bridge near Magdeburg between western and eastern occupation zone.
June 19, 1948.
SMAD begins with the interruption of all passenger traffic (road, rail, water).
June 24, 1948.
SMAD imposes an unlimited blockade on the western sectors of Berlin (transport, electricity, food).
June 26, 1948.
Start of the American Airlift, British supply flights to the western part of the city take off on 28 June.
February 4, 1949
The Western Allies impose a counter-blockade: a ban on the transport of goods to the East.
May 12, 1949
The so-called Jessup-Malik Agreement ends the blockade of access roads to Berlin after almost eleven months.
September 30, 1949.
The Western Allies' airlift for Berlin is finally closed after a phase-out period.

SUPPLY THROUGH THE AIR BRIDGE
Approximately 380 aircraft were in daily use during the airlift flights. A total of 277,728 flights brought over 2.3 million tons of goods into the blocked city: in addition to clothing, tools and machines of all kinds, coal and above all food.
On average, around 4,500 tons of air travel to Berlin every day. At the height of the blockade, on 16 April 1949, there were 12,940 tons of goods. A total of 57,000 people are involved in maintaining Berlin's supply.
These are the months of the blockade of Berlin in sober data and facts. The first years after the end of the war in 1945 brought the inhabitants of the four-sector city of Berlin very different encounters with the cultural programmes presented by the occupation authorities, not least in the sense of re-education: films from France, concerts from England, hits and comedy from America. The concert announcements of the Berlin orchestras featured works by composers ostracized by the Nazis, works that were not allowed to be performed publicly for twelve years. The repertoire of Berlin's theatres was similar. Emigrants came back. Together a cultural atmosphere was created, which made the important international trends and events noticeable again in Berlin. The Philharmonic played Mendelssohn-Bartholdy, the world-famous violinist Yehudi Menuhin was the first Jewish artist to perform in Berlin after the Holocaust.& ,
& ,Ernst Deutsch played Lessing. The dance and singing ensemble of the Red Army, the Alexandow Ensemble, performed in the middle of the ruins of the Gendarmenmarkt. The stations, first Soviet licensed Berliner Rundfunk, then RIAS (Rundfunk im amerikanischen Sektor) founded by the Americans, and finally NWDR Berlin founded by the British were the stations with a German-language program. But there were also stations in Berlin that were set up for the Allied troops. Radio Volga for Russian soldiers, BFN for British troops. The French had installed a station which broadcasted the programme of the French state radio station'France Inter' for a long time. And finally, there was the AFN, last mentioned in the list, but one of the most popular stations ever. AFN presented the younger Berliners Glenn Miller and Tommy Dorsey, Count Basie and Frank Sinatra, Lionel Hampton and Frankie Laine, Dinah Shore or the Mills Brothers. And the German bands started to record this new sound: the boogie of course, but also the swinging hits with which the American stars entered the charts.& ,
By the way, the term'hit parade' was absolutely new and unusual to us. For years, a comparable show on RIAS simply called itself'Hit of the Week'. In this overabundance of a cultural nature in the broadest sense, trends began to emerge that made it clear that the so often affirmed unity of the Allies was beginning to dissolve. These were the first signs of the later Cold War. Certain poetry readings or theatre premieres were avoided by Soviet cultural officers, who did not previously exclude any such events. But even the Western Allied uniforms could not be seen on the floor when'The Russian Question' by Konstantin Simonow was on the programme. A play that exposed the terror of American society and was only shown on East Berlin stages. In Berlin, the clashes between the political parties and trade unions became increasingly fierce and the division of the city began to emerge. Almost everything developed a politically contrasting double image.& ,
There was the Free German Trade Union Confederation, but it was only the mouthpiece of the Communists, and an independent trade union organisation developed, which began to work according to democratic principles. The police were divided into western and eastern sectors. Soon the fire brigade also began to drive missions only in their respective area. The amount of calories allocated was still the same and so was the money. The long-planned currency reform of 1948 gave the Soviets the pretext of putting West Berlin under pressure and forcing the Western Allies to give up Berlin.& ,
They closed off the access routes to and from West Berlin. West Berlin was also to receive East German money instead of West German marks and ultimately be placed under the sole control of the Soviet military administration. The Berlin blockade began. The courage of the Berliners, the strong sympathy of the world public and the determination of the Americans, British and French to defend the democratic rights of the Berliners ultimately caused the blockade to fail after eleven months.
GOETZ KRONBURGER
Journalist and contemporary witness of the difficult years of construction in Berlin

Review 2
Read, write and discuss reviews... more
Close menu
Customer evaluation for "The Mess Is Here - Songs and contemporary documents of the Berlin blockade years (CD)"
From: John Barker Cd On: 23 May 2019