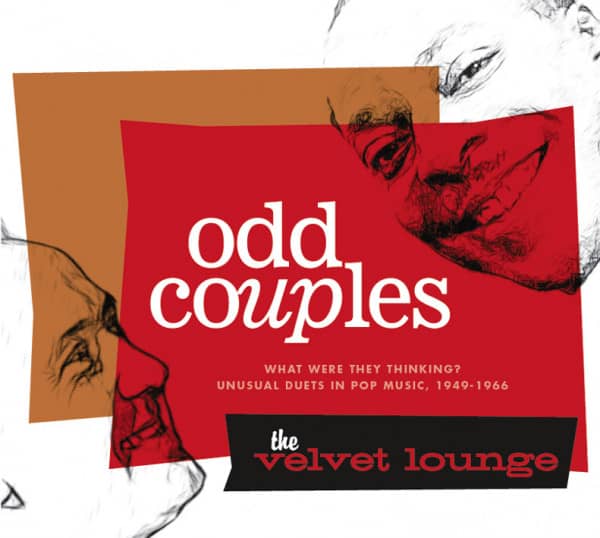 Various - History: Odd Couples - What Were They Thinking?

Odd Couples
What were they thinking?

Artist & Repertoire is a challenging job, especially when one works for a major label. There is the constant pressure for new 'product,' new ideas, new songs for the numerous artists and new ways to generate public interest in those artists and to widen their audiences.

Added to these challenges, is the need to stroke the delicate egos of the various performers, each of whom thinks he or she should be getting the best songs and the most attention from the company.

The early 50s in popular music was a time of gimmicks, a time of novelty records. Mitch Miller made a fortune for Columbia Records convincing the label's singers to record songs that caught the public's ear, despite the fact that, as often as not, the artists themselves found those catchy tunes deplorable (You'll notice, though, that none of them refused the royalty checks when those novelties sold in the millions).

This period was also a time when the masses were opening their ears to different kinds of music. Country music, Rhythm & Blues and Latin music were all becoming popular, especially when such songs were recorded by pop artists in a pop style. A&R men began to experiment with duets, some utilizing 'name' stars of the same genres, and some odder pairings of artists from different genres, in the hope that this might draw fans of both acts, hoping for what is today known as 'crossover' success. This was not exactly a new development, Decca boss Jack Kapp had been pairing artists f rom different genres for years, ie: Bing Crosby with both Louis Armstrong and Louis Jordan, for example.

The couplings on this CD are mostly odd ones. Some, such as Perry Como with the Sons of the Pioneers, actually work well, while others are simply bizarre. Who on earth could possibly fit with Esquivel, for example? You have to ask yourself, "What were they thinking?"

We begin with one of the great country stars of all time, Red Foley. Red was a big influence on Elvis Presley, who recorded his Peace In The Valley and Old Shep, but Red is much more than a mere influence.

Foley started out on radio, Chicago's WLS National Barn Dance in 1930, and later became the host of the first network country music TV show, 'Ozark Jubilee.' He made his debut recordings for Melotone in 1933, before signing a lifetime contract with Decca in 1941. His Decca hits include Smoke On The Water (#1 for 13 weeks in 1944), Chattanooga Shoeshine Boy and his cover of Hardrock Gunter's Birmingham Bounce, which was #1 for 14 weeks. As an aside, Red's daughter Shirley has been married to Pat Boone for over 50 years.

Foley's partner here on Night Train To Memphis is the little known Roberta Lee. The record is a rocking number featuring Grady Martin's hot guitar licks. Roberta was a flexible singer who was equally good on country or pop material, even covering some R&B tunes, like Johnny Otis's Please Have Mercy on RCA's label "X."

In 1951, she joined Decca, paired first with Hardrock Gunter. Their rocking version of Sixty Minute Man is a hot one. Next, after her two sessions with Foley, she was sent to New York, where she cut three dates with that city's finest studio players. After a short stint with RCA in 1954-55, nothing more is known about her.

Red's next companion is somewhat better known. Cecil Gant burst upon the scene during World War II with what author Arnold Shaw considers the first R&B hit, I Wonder, the story of a lonely soldier missing his girl back home. Cecil was unable to follow up his grand success, but made some rocking boogies and mournful blues ballads for King, Bullet, Downbeat, Imperial and Decca. 'The G.I. Singsation' left this earth in 1951 at only 37 years of age.

Foley and pop stylist Evelyn Knight had a pop crossover hit in 1951 with My Heart Cries For You. Here, they sing Idle Rumors. Knight's bailiwick was exclusive night clubs, like Manhattan's Blue Angel and Persian Room, as well as Ciro's and the Ambassador Hotel's Coconut Grove in Los Angeles. Her Decca solo hits include her cover of Paula Watson's A Little Bird Told Me and Powder Your Face With Sunshine, both of which reached #1.

Red's fourth partner here is the great Sister Rosetta Tharpe, the first gospel performer to cross over into secular success, a controversial undertaking back in 1938, when she joined Harlem bandleader Lucky Millinder, rocking out with tunes like Shout, Sister, Shout and I Want A Tall Skinny Papa. Rosetta went out on her own, appearing at John Hammond's famous 'From Spirituals To Swing' concert, the Cotton Club and Café Society. Her guitar playing as well as her singing have influenced rock 'n' roll musicians for decades. Her Strange Things Happening Every Day was heard frequently on disc jockey Dewey Phillips's Memphis radio show. Later, she teamed with Marie Knight, selling lots of discs with songs like Up Above My Head. Rosetta's 1954 wedding drew a crowd of 25,000 fans.

Tennessee Ernie Ford studied classical music and singing at the Cincinnati Conservatory, before becoming a B-24 bombardier during World War II. After the war, he found his way to San Bernardino, California, where he worked as a radio announcer. He was discovered by bandleader Cliffie Stone and hired to work at Pasadena's KXLA, doing a morning show before joining Cliffie on 'Hometown Jamboree.' Ernie's first big hit was Mule Train. The Shotgun Boogie was followed by a number of records in the same boogie vein. In 1955, he recorded the song for which he'll be remembered, Merle Travis's Sixteen Tons. Ernie made the transition to television, hosting his own shows, always insisting on singing a hymn at the end of each.

Mollie Gene Beachboard aka Molly Bee was ten years old when she was discovered by country star Rex Allen in 1948. Three years later, she signed with Capitol Records and had a hit with I Saw Mommy Kissing Santa Claus. She worked on 'The Pinky Lee Show' on national TV, after which she joined the cast of Cliffie Stone's 'Hometown Jamboree,' where Ernie encouraged her to yodel. Her yodeling became a popular feature on the show. She appeared in several movies, including 'Going Steady' and 'The Young Swingers.' Later problems with drugs and alcohol destroyed her five marriages.

When Ernie recorded I'm Hog Tied Over You with Ella Mae Morse in 1952, she was riding her come-back hit, The Blacksmith Blues. Ella Mae sang Capitol's first big seller, Cow Cow Boogie ten years earlier with bandleader Freddie Slack. She was just seventeen at the time, and many thought she was black because audiences who hadn't seen her photos couldn't tell which race she belonged to. Her other early hits included Mister Five-By-Five, Shoo Shoo Baby and The House Of Blue Lights. She can be seen in the motion pictures 'Reveille With Beverly,' 'South Of Dixie' and 'The Ghost Catcher' with the comedy team of Olsen & Johnson.

Kay Starr was born Katherine Lavern Starks in Oklahoma of American Indian and Irish heritage. She began singing at an early age and, by 15, was on the road with jazz violinist Joe Venuti's band. She also worked with the bands of Glenn Miller, Charlie Barnett and Wingy Manone. She recorded for Crystalette and Modern, before joining Capitol in 1947. Capitol already had some of the greatest female pop stars, so Kay was always struggling to get decent material to record.

She heard Pee Wee King’s Bonaparte’s Retreat and grabbed the song for herself, convincing her A&R man, Dave Cavanaugh to let her record it. The tune became a hit for her in 1950, followed by her classics, Wheel Of Fortune and Edith Piaf’s If You Love Me (Really Love Me).  With Ernie, she scored with a cover of the Paul Gayten/Annie Laurie R&B smash, I’ll Never Be Free. Here, they give us Oceans Of Tears.

The Dinning Sisters, Jean, Ginger and Lou, were also from Oklahoma, a family of nine children. In Chicago, they worked on NBC radio's 'National Barn Dance' for five years, appearing in the movie of the same name before heading for Hollywood. The girls were a more country oriented version of the Andrews Sisters, although they sang pop tunes well too. Their biggest hit was Buttons And Bows, from the Bob Hope/Jane Russell picture, 'Paleface.' In 1960, Jean wrote Teen Angel, a #1 hit for her youngest brother, Mark. She also recorded a number of cover tunes for Essex, with and without her sisters. Their Rock City Boogie with Ernie continues his set of boogies.

Video von Various - History - Odd Couples - What Were They Thinking?

Article properties: Various - History: Odd Couples - What Were They Thinking?

$5.66 *
Show all "Various - History" articles
The Velvet Lounge - Exotica Heroes and Easy Listening Troubadours
Exotica Heroes and Easy Listening Troubadours The 'Velvet Lounge' is a remarkable re-release series for all things elegant, entertaining, and sometimes even exotic. This addition presents itself as a comfortable and welcoming home for terrific treasures from the fabulous Fifties and the strange Sixties. A mark of quality for all kinds of audio-finds from long ago and far away.
10.03.2017
Similar products Customers also bought Customers also viewed
Similar products
Hank Williams: Lost Highway - Graphic Novel (Gebundene... Art-Nr.: 0023044 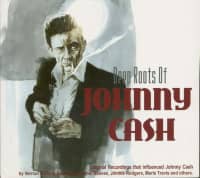 Tracklist
Various - Bear Family Records - Odd Couples - What Were They Thinking? CD 1
01 Night Train To Memphis
02 Don't Start Courtin' In A Hot Rod
03 Paging Mister Jackson
04 Cattle Call
05 Idle Rumors
06 I'm Hog-Tied Over You
07 You're The Only One For Me
08 Someone To Watch Over Me
09 Tumbling Tumbleweeds
10 Oceans Of Tears
11 My Adobe Hacienda
12 I Can't Tell My Heart That
13 The Little Ol' State Of Texas
14 Rock City Boogie
15 The Shoe Is On The Other Foot Tonight
16 Hey Good Lookin'
17 Have A Little Talk With Jesus
18 The Handsome Stranger
19 Mack The Knife (Session)
20 Mack The Knife