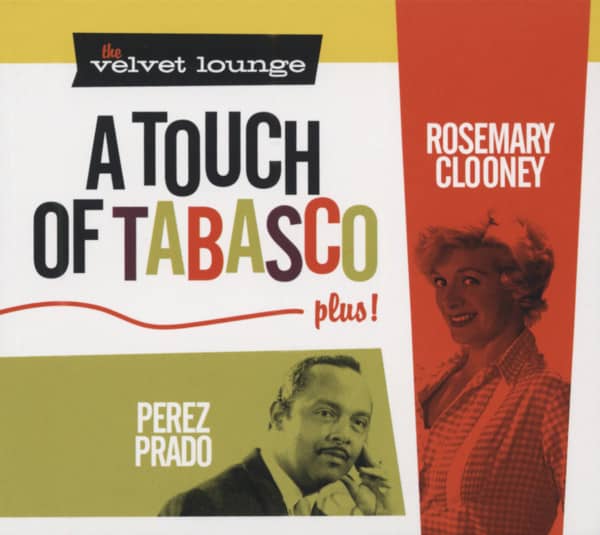 Rosemary Clooney & Perez Prado: A Touch Of Tabasco, plus - The Velvet Lounge

'Opposites attract' may be a familiar, worn-out saying but it's often true, even in artistic and professional circumstances. It applies to certain unlikely collaborations in popular music precisely because the participants' differences lead to striking combined results. It's especially true in the case of Rosemary Clooney and Perez Prado.

During three Hollywood sessions in July and August 1959, two different musical worlds collided. Over here was the current star Rosemary Clooney, from Kentucky, a woman who shaped the popular music of the 1950s with hits like Come On-a My House, Hey There, This Ole House and others. Over there was the mambo king from Cuba, Perez Prado, older by twelve years, whose super hits Cherry Pink And Apple Blossom White and Patricia had become evergreens in music history.

Their collaboration resulted in 'A Touch Of Tabasco,' an album merging Latin standards and all-American songs. At the start, the language issues between the two stars and their musicians did not help the project move ahead smoothly but Clooney's husband, Jose 'Joe' Ferrer, from Puerto Rico, helped break down the barriers. He taught his wife the required Spanish articulation enabling her to sing Latin classics like Corazon De Melon, Adios and Cu-Cu-Rru-Cu-Cu Paloma.

The two singers were accompanied in the studio by first-rate musicians, some who had already made their name on records or in various bands and others who were just emerging. The list includes ace cats like horn players Ollie Mitchell and Paul J. Horn, and drummers Leo Acosta and Earl Cyril Palmer. They made sure that the Clooney/Prado versions of legendary tunes like Mack The Knife (from Berthold Brecht's The Threepenny Opera), In A Little Spanish Town, Cole Porter's You Do Something To Me, and Bali Ha'i (from the top musical 'South Pacific') received a personal, original treatment.

Here we have fifty minutes of enthusiastic yet mellow, positively good-spirited music. There is an infectious playfulness between the two leading characters that comes across strongly in this one-of-a-kind project. We have included three extra tracks to enhance the original 'A Touch Of Tabasco': Summertime Love, Amor, and Sania (without Rosemary Clooney), recorded at the same studio in February 1960. Even so, this album is over far too quickly. That just underlines how inspiring and exceptional this musical partnership was!

Review 1
Read, write and discuss reviews... more
Close menu
Customer evaluation for "A Touch Of Tabasco, plus - The Velvet Lounge"
From: Helga On: 13 Jun 2017

$11.26 *
Show all "Rosemary Clooney & Perez Prado" articles
The Velvet Lounge - Exotica Heroes and Easy Listening Troubadours
Exotica Heroes and Easy Listening Troubadours The 'Velvet Lounge' is a remarkable re-release series for all things elegant, entertaining, and sometimes even exotic. This addition presents itself as a comfortable and welcoming home for terrific treasures from the fabulous Fifties and the strange Sixties. A mark of quality for all kinds of audio-finds from long ago and far away.
10.03.2017
Similar products Customers also bought Customers also viewed
Similar products
Jersey, Jack: Pappa Was A Poor Man - No Regrets (7inch,... Art-Nr.: 45JJ625019

Tracklist
Various Artists - A Touch Of Tabasco, plus - The Velvet Lounge CD 1
01 Mack The Knife
02 Corazon De Melon (Watermelon Heart)
03 Like A Woman
04 Sway
05 Magic Is The Moonlight
06 You Do Something To Me
07 Adios
08 In A Little Spanish Town
09 I Only Have Eyes For You
10 I Got Plenty O' Nuttin'
11 Bali Ha'i
12 Cu-Cu-Ru-Cu-Cu Paloma
13 Summertime Love
14 Amor
15 Sania
16 Amor (A rare glimpse into a recording session
17 Summertime Love (A rare glimpse into a record